Trending Now
You are at:Home»Featured»Church Bombed in Iraq
By ACN-USA News on August 3, 2011 Featured, Those in Need 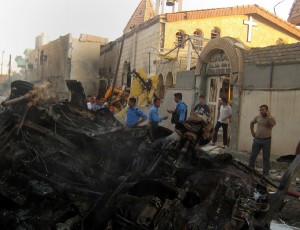 A leading Catholic bishop in Iraq has spoken of his people’s shock and courage after a car bomb outside a church left 13 people injured.

Archbishop Louis Sako of Kirkuk said he and his faithful “will never stop witnessing to Christ” in spite of the bomb which went off directly outside the Holy Family Syrian Catholic Church in Shaterlo, a poor and densely populated district in northern Kirkuk.

The explosion, which took place at about 5.30 am, Tuesday, August 2nd, was so severe that people asleep in nearby homes were injured by falling glass and other debris.

According to reports received by Catholic charity Aid to the Church in Need (ACN), the 13 people injured in the blast included a 20-day-old baby.

Of those injured, all but one, an elderly man, were released from hospital shortly after receiving treatment for cuts and other minor ailments.

A number of homes were damaged in the blast, a couple of them seriously.

The explosion was made worse because the car bomb exploded next to an electricity generator close to Holy Family Church.

The blast blew a hole in the side of the church. 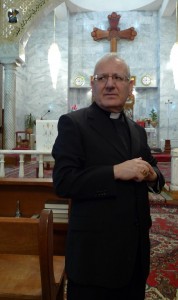 In an interview with ACN, Archbishop Sako said the devastation could have been far more serious, with reports of a bomb that failed to detonate close to another church in Kirkuk.

Respected Catholic news agency AsiaNews reported local sources claiming that a second bomb was found in a car parked near a Presbyterian Evangelical church at al Mass, in central Kirkuk.

The bomb was reportedly ready to explode but was defused.

Archbishop Sako said, “We are very shocked. To attack a holy place such as a church makes the crime serious, and to attack it during the holy season, Ramadan, makes it even worse.”

“To attack and to put people’s lives at risk in this way is a sin.”

The archbishop went on, “Despite what has happened we will never give up. We will continue our mission. We will never stop witnessing to Christ.”

He said that the attack came in the middle of a summer conference held in Kirkuk Cathedral for students to examine religious and other subjects.

“The day before the attack, we had 150 people at the conference. After it happened, I asked if they would come back to continue and they did. This is a very important sign of hope.”

He said that Wednesday, August 3rd, he was due to meet Muslim leaders, both Sunni and Shia, to ask imams of mosques across Kirkuk to condemn the atrocities.

“I will ask them to say that what has happened is wrong, that there should be an end to killing, injuring and kidnapping people. I am sure the imams will condemn these actions.”

Archbishop Sako said the attackers’ identity was unclear but added that their motive was probably political.

He said, “The people behind the attacks are targeting Christians. But there is no sense in attacking Christians because we have no major part to play in politics. We are not dangerous for them.”

“Everybody knows we are fragile, that we are peaceful and want dialogue.”

Kirkuk, which has a population of 900,000, is at the center of an ethnic-political struggle between Arabs, Turkmen and Kurds.

The latter want the city annexed to Kurdistan, while Arabs and Turkmen want it to remain under the control of Iraq’s central government.

As a Catholic charity for persecuted and other suffering Christians, Aid to the Church in Need has prioritized help for Iraq and has provided support for Kirkuk Cathedral and the cathedral hall, providing conference facilities.

The charity has provided help for Sisters, seminarians and Mass stipends as well as aid for refugees and displaced people.