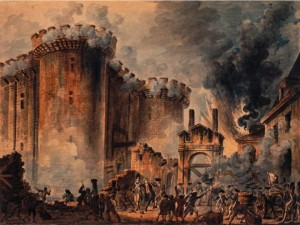 Acting as unofficial scorekeeper, Sojourners Founder and CEO Jim Wallis recently declared, “There really is a class war going on, and the upper class is winning.” However, many of the class warfare protesters who are taking to the streets to “occupy” Wall Street and American cities are the disgruntled children of well-to-do parents. A quick sampling of video clips from the protests shows students from elite universities like Harvard, George Washington, and Columbia. Such protestors are driven less by genuine economic hardship than by misguided animus toward the market system that has enabled the wealth from which they have benefited.

One such protestor, Robert Stephens, launched into a tantrum about a bank seizing his well-educated parents’ $500,000 home. The claim turned out to be bogus, but he managed to convince sympathetic media outlets that he was the victim of abuse and scorn at the hand of free enterprise. Stephens, a student at the prestigious George Washington School of Law in Washington, is just one of many out-of-touch protestors pointing simplistically to the market as the culprit in the current economic downturn while ignoring other sources of financial dysfunction, such as the crony capitalism of government subsidies to business or government fiscal irresponsibility.

Struggling to make ends meet, most Americans lack the time to tune into protestors who are just as distant from their problems as Washington bureaucratic elites. Ronald Reagan offered these poignant words as he called on his own political party in the 1970s to shed its big-business country club image and to embrace the factory worker, the farmer, and the cop on the beat:

Extreme taxation, excessive controls, oppressive government competition with business, frustrated minorities and forgotten Americans are not the products of free enterprise. They are the residue of centralized bureaucracy, of government by the self-anointed elite.

Excessive taxation, regulation, and centralization of power always save their most vicious bite for the middle class. They are the hardest hit, not the super wealthy, some of whom call for higher taxes and are fawned over by a bloated government with an insatiable appetite for revenue. If there is any class conflict, it will come from the taxpaying class as it tries to tame the avarice of the political class. Most Americans are not very sympathetic to radical protestors because they still believe in an American Dream of limitless potential and opportunity.

While some protestors call for more government—or even the use of force—to restore their version of social justice and utopian economic schemes, lost in the debate is the fundamental purpose of American government and the importance of virtue and a benevolent society.

This nation’s founders adopted a system of government emphasizing a separation of powers and federalism to protect private property and the harmony of the Republic. Protestors calling for a dismantling of these ideas, whether it is through the confiscation of another’s property or through massive, centralized power seem alien to most Americans. During his inauguration another American President, Bill Clinton, aptly declared, “There is nothing wrong with America that cannot be cured by what is right with America.”

The virtues and values that have shaped our Republic offer the best for America. One of the wealthiest men of America’s founding era was John Hancock. Yet the man who once quipped, “They [the Crown]have no right to put their hands in my pocket,” was no miser. Often a political foe of the founder known for his oversized signature on the Declaration of Independence, American President John Adams nonetheless wrote, “If benevolence, charity, generosity were ever personified in North America, they were in John Hancock.” Hancock supported churches, city improvements, the arts, assisted widows, and paid for the education of orphans. However, a much greater compliment was bestowed upon him. He was widely known for treating those of modest means with the same respect as those with wealth and power.

History too shows the consequences of regimes that wished to redistribute the wealth of others and make denunciations about greed, especially wrapped within a materialistic, secular worldview. That was class warfare, too, and it ended in blood and wretched poverty.