Trending Now
You are at:Home»Learn & Live the Faith»Apologetics»Clergy Heretics and Heretical Synods: Been There, Done That
By Guy McClung, J.D., Ph.D. on June 19, 2015 Apologetics, Featured 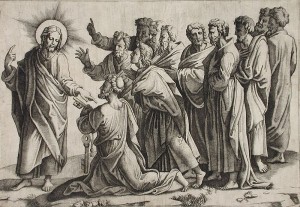 There is some fear that the Vatican’s upcoming fall Synod on the Family will proclaim and promote heresy. The feared heresy would be in contradicting the explicit scriptural teaching of Jesus and of St. Paul regarding the prohibition of divorced-and-remarried Catholics receiving Holy Communion.

Historically, the Church has dealt with heresy accepted, proclaimed, and promulgated by members of the Catholic hierarchy. If this occurs, whether the heresy be stated directly or implicitly, it will not be the first time. Nor will it be the last time.

Heresy can be implicitly declared, in this case, by saying that Church teaching has not been changed, while pastoral practice are nevertheless implemented based on the “signs of the times,” ignoring Christ’s exhortation to “go and sin no more.” In other words, those remaining in a state of adultery with a new partner, the divorced who remarry outside the Church, can be “welcomed” by the Church and allowed to receive Holy Communion.

Proposing a false teaching on God’s mercy, by which even Judas will be found to be in paradise, the rebellious German cardinals and prelates issued pastoral directives in late 2014. The directives state that since the Church’s position is perceived by many in Germany to be unmerciful, the Church needs to change its teachings. The clear and centuries-old Church teaching on mercy is that real mercy demands warning the faithful that receiving the Eucharist unworthily will result in spiritual death. The rebellious Germans fail to mention the passages in St. Paul’s 1 Corinthians that say whoever receives the Eucharist unworthily brings judgement upon himself. Real mercy demands such a warning. False mercy, heretical mercy, encourages the sinner to “go and sin on more.”

Over the centuries there have always been heresies – beginning with the Second Century’s Gnosticism, Marcionism, and Montanism, passing through all the centuries with heresies like Pelagianism,  Islam, Berengarianism, and Jansenism, to the Teilhardian and Neomodern heresies of the 20th century. There have been Synods called by heretical bishops which produced statements proclaiming their heresy.

But Synodal proclamation does not a doctrine make.

Today a Synod is merely a consultative body of bishops, a relatively small number compared to the full college of bishops. The bishops are carefully chosen by the pope, who controls the agenda and sets the rules. The Synod has no power to decide anything, no authority to make doctrinal proclamations, and no ability to resolve any issue.

Jean Ousett (1914-1994), a Catholic intellectual who lived in France, wrote for the periodical Permanences and published a letter that dealt with heresies. Ousett’s letter was written to a fallen-away Catholic who had left the Church citing the “demolition” of the Church in France. Michael Davies, introducing his English translation of Ousett’s letter, notes that Ousset “depicts the current dark disorder as a call to action rather than a cause for despair” and that “action is the antidote to despair.”

Ousett provides a call to action in dealing with all heresies and he makes it clear that he is not surprised that there have been and will be heresies:

Hell has not given up the fight! And what a comfort that is! What a marvelous sign of the eternal reality of our Faith! How we ought to prefer this state of incessant alarm to the life of so many trouble-free “religions” which Satan does not even consider worth attacking. The disaster, the great disaster, is that we, Catholics, do not know—do not meditate on—the history of the Church.

Her struggles and upheavals appear to us inadmissible because we think that peace and calm should be the sole marks of Her divine origin. We encourage others to believe that life would be more peaceful, more serene with us than it would be elsewhere, and then we wonder at the general inertia! To quote Bernanos: “They will write on their temples: ‘You will be better fed here than over the way’ and then they will be astonished to discover that their god is their belly.”

A few persecutions coming from without – No cause for alarm. But troubles, treasons, scandals within, amongst ourselves? Our confidence evaporates. And yet, neither doctrine nor the historical precedent of 2,000 years would justify us in stating that, here below, the Church must necessarily consist of edifying laity, of spiritual priests sound in doctrine, of bishops free from human respect, courageous in the face of Caesar and with heartfelt submission to the Holy See, and, above all, …Popes not only infallible but also impeccable!

“Heresies there must be,” writes the far from traditionalist Karl Rahner . . .for they do not spring merely from man’s free will. They belong to those sinister things which must be, so that no man can glorify himself or his own “wisdom” in the sight of God.

And so the Christian must not be surprised at heresies: on the contrary, he should expect them. He must consider them to be the inevitable temptation, the highest temptation, the most sublime temptation, in which the Prince of Darkness disguises himself as the Prince of Light. And if the Christian is unaware of the heresy, he will not accept his peace of mind without question. Rather, will he ask himself, in fear and trembling, whether the eyes of his spirit have become so blind and his heart so insensible to the difference between the true and the false, that he can no longer recognize heresy as such.

Ousett states that in the time of each heresy, there were no clear battle lines and that members of the clergy were also susceptible to heretical infection:

We imagine today that in all past heresies the opposing parties were well defined, the faithful on the one side, the heretics on the other. Actually, for those who experienced them, it was a “dark disorder”, with nobody knowing which side to take. The parish priest was on one side, his curate on the other. There was disagreement among the bishops. Saints like Athanasius and Hilary were a tiny minority. And, as always, it was the “others” who claimed to have “a sense of history” to understand their world and to be witnesses for their generation. The passage of time distorts what was, in fact, a dark and bloody disorder not really unlike what we see now.

“What is to be done in the time of the darkness of a heresy? Ousett says, “Our duty is clear: first of all, we must have no fear, we must avoid bitterness, we must not become deserters, we must advance, we must remain firm in the Faith!”

Ousett likens the clergy who support heresy and lead their congregations astray to “wolves in the guise of faithful shepherds.”

You spoke of the goat in Daudet’s story; she may have much to teach us – but God hears our prayers. That old she-goat stood her ground against the Wolf throughout the night, refusing to lie down before the dawn. Is there a more enviable lot for any soldier of Christ who refuses to be daunted? Night is the time for the scattering of cowards; for the silencing of the fearful, as Scripture tells us; the time when the bad shepherds prefer to remain in bed; the time when the eye-lids of the Apostles are heavy with sleep. The time for the activities of the Judases. The time for the loneliness of the Master. But it is also the time when the Bridegroom rejoices to find the wise virgins, their lamps full of oil and burning brightly.

It is the night: let us stand fast and fight. Happy are those who, like the young she-goat, are determined to fight to the death, who refuse to lie down and die before the break of day. For it is by enduring till the dawn that true victory is won, that our task is accomplished. And even if the Wolves withdraw only after they have torn us to pieces, the dawn is, in fact, the time when the Wolves flee the light; the time when they take flight from the flock; the time when even the cowardly take heart; the time when the flock can advance without fear.

May God make of us true soldiers of Christ! And when the time comes for us, too, to lie down and die, may we see in the East that brilliant light, not of a star but of that “Lumen Gentium”, of the “Sol Justitiae” which is the Christ: the dawn of a new Christian order in the world!

In an introduction to a recent reprint of Ousett’s Letter [In Catholic Order, Vol. 56, No. 1, Jan. 2015], Owen Roberts quotes Msgr. Philip Hughes’s Short History Of The Church [1939], making the point that there are, have been, and will be heresies:

Already we are seeing the appearance of types that will never cease to reappear throughout two thousand years: Catholics who propose to explain Catholicism by synthesis with the intellectual life of the time . . . Catholics who turn from an official teaching that does not encourage their personal likings to an alleged private inspiration that sets them apart from ordinary teaching. In one sense Church History is a web where threads such as these do cross and recross.

Ousett’s Letter finishes by quoting from The Imitation Of Christ

We have begun: we may not go back, nor may we leave off. Take courage brethren: let us go forward together. Jesus will be with us. For the sake of Jesus, we have taken up this Cross; for Jesus’ sake, let us persevere in it. He will be our Helper, Who is our Captain and our Forerunner. Behold our King marcheth before us, Who will fight for us. Let us follow Him manfully, let no one fear terrors, let us be ready to die valiantly in battle; nor let us bring disgrace upon our glory by flying from the Cross!” (The Imitation of Christ, Book III, Chap. LVI)

To answer the question, what are we to do this fall if some members of the Church  teach heresy? There is no better answer than Ousett’s:

“It is the night; let us stand fast and fight.”