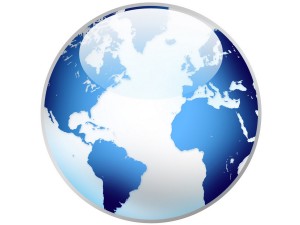 It is quite often the case that the simplest explanation is the correct explanation. The namesake for this principle comes from the English philosopher and theologian, Franciscan friar William of Ockham. It is called Occam’s razor. From various sources, Occam’s razor is a principle of parsimony or frugality used in logic and problem-solving. It states that among competing hypotheses, the hypothesis with the fewest assumptions should be selected. Perhaps Occam’s razor can be appropriately applied to many of our current issues.

A particular example is the theory of anthropogenic (human-induced) global warming. Our earth has gone through many periods of naturally occurring global warming and cooling. We know the Vikings colonized and established agriculture in Greenland during the Medieval Warm Period, and we know of the dark days of a frozen Thames River in the U.K. during the Little Ice Age. Many eco-activists point to greenhouse gases and climate change as a reason to regulate carbon. Occam’s razor, on the other hand, would correctly inform us that natural climate change has natural causes.

As depicted in this illustration (Pennsylvania Geological Survey, 1999), in the larger scale of the earth’s history, we are at a relatively warm period. The point of this illustration is the historic nature of dramatic climate change without any influence by man, and our current position on the higher end of the historic temperature fluctuations. Based on this illustration, if past is prologue, we probably shouldn’t sell our long-johns. 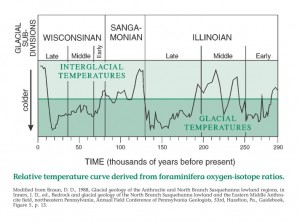 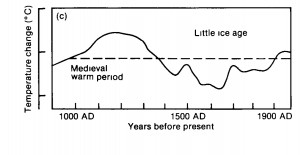 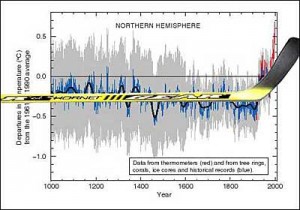 The improbability of flattening the Medieval Warm Period and Little Ice Age with proxy data and statistics speaks to the essence of Occam’s razor. The proxy data relied upon as the basis for the statistical assessment themselves have a multitude of variability, unknowns, and extraneous considerations. The use of statistics to defend a hypothesis can be subjective and several experts have critiqued how statistics were used in this case to support the hockey stick theory (see Stephen McIntyre, Ross McKitrick, and Richard Mueller). The principle of Occam’s razor, however, suggests that there should be no dramatic changes in our laws and economy to respond to the relatively new allegations of man-induced global warming.

Further, many eco-activists do not contest that water vapor accounts for 95 percent of the greenhouse effect, and that the man-made CO2 contribution to the earth’s total CO2 emissions is less than 4 percent. This man-made contribution to the atmospheric CO2 concentration is not large, and may not appreciably contribute to the greenhouse effect. But, when controlling carbon seems to be the end game for some bureaucrats, any amount of man-made CO2 can be pointed to as evidence for the need for laws and regulations.

As demonstrated in this U.S. Chamber of Commerce illustration of the 2009 American Clean Energy and Security Act, this law’s convoluted “logic” diagram is in full view. A multitude of regulations and mandates would flow from the various organs of government. 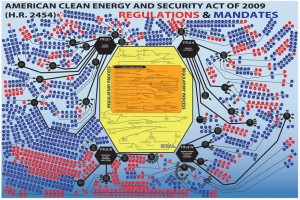 The ultimate prize to the eco-activists and their big government benefactors is the control of carbon, which would touch every aspect of our daily lives. Consequently, greenhouse gases and global climate change are of paramount importance to the eco-activist agenda. While much has been written about global climate change over many years, the basic aspects of the issue haven’t changed; we are asked to forget things we once knew and ignore the simplest hypothesis that the earth’s climate is ever changing. Occam’s razor.