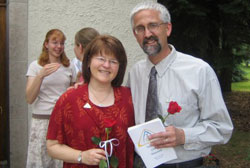 At the time Mark and I became engaged, our diocese required couples to complete a six-month Pre-Cana program that involved meeting a few times with an older, more experienced couple, attending a one-day retreat, and taking a premarital inventory.

We were excited to complete the program, because we wanted to start things off right. We thought we were doing great, until we met with the older couple to discuss the results of our premarital inventory, a questionnaire designed to evaluate the couple’s compatibility and project their potential for forming a viable marriage.

According to the couple, we’d completely bombed the questionnaire. Mark and I disagreed on many items – too many to assure them of our compatibility – and the couple was concerned. Not only that, but also they recommended that we not get married! We were certain of our vocation to marriage and to each other, so we protested their assessment. With trepidation, they agreed to discuss the matter with the pastor and schedule a meeting for the five of us afterward. When we met, the pastor recommended against our marrying, too.

What ensued was a considerable amount of head shaking, eyebrow raising, and sighing. That’s not to mention the excessive nervousness on the part of Mark and me. Finally, and obviously reluctantly, the pastor agreed to marry us. We were ecstatic and eager to proceed with our wedding plans. That was 29 years ago.

What made us so convinced that the apparent lack of compatibility was not an issue?

We were well aware of our differences. Yet, we also were aware of the power of the graces given to married couples through the Sacrament of Marriage. Husband and wife may receive God’s grace whenever they need it, and that grace has unlimited ability to change, transform and purify.

Based on that, Mark and I added a private dimension to our marriage vows beyond “love, honor, and obey” that secured our desire and commitment to change for each other. We’d been (repeatedly) told the old cliché – “you get what you marry” – that you have to accept the other just as he/she is, without further expectations. We felt that was true, but only to a degree. We believed that “what you marry” is only the starting point. We were convicted that the sacramental graces would help us to change for the sake of the other in order to become the individuals and couple that God had in mind for us to be from all eternity.

Change, in this context, doesn’t mean becoming a completely different person. It means accentuating and improving on the qualities God has given us and working to achieve and develop others. It means opening ourselves to the other’s point of view and squelching the bad habits, annoying behaviors, and obnoxious attitudes that threaten our closeness as man and wife. It means humbly praying together for God’s guidance and persistently seeking Truth.

Let’s take, for example, our daughter’s premature birth and month-long stay in the neonatal intensive care unit. Today she is a lovely 23-year-old woman, but at the beginning it was touch and go. The day before Monica was to be released from the hospital, she contracted a near-fatal staph infection. After three tries, they were able to revive her, but instead of celebrating her homecoming, we spent days wondering whether or not she would live.

I was angry. I’d cry and beat the daylights out of my pillow each night over the agony of watching our baby suffer with the tubes, wires, needles, and restraints. Mark was silent, going about his day as normally as possible in between hospital visits. I took his silence as unaffectedness, which added to my anger. One day, I could take it no more, and I exploded.

“What’s wrong with you? Don’t you care?” I screamed at him. The discussion that followed was one of the most important of our entire marriage. Now I know that Mark’s initial reaction will be silence; he’ll work through it internally, piecing it together in his mind and trying to make sense out of it before responding. Knowing that, I’m content to give him some space before we tackle a hurdle. In turn, he tries to indicate where he’s at so I don’t go berserk while I’m waiting to discuss. He also tries to be more expressive when we do talk.

A couple can be so incompatible that they shouldn’t marry, and I don’t recommend blithely casting off a pastor’s advice. I do recommend calling on the grace promised through the Sacrament of Marriage and the commitment to change for the sake of the other. It’s a great way to both start a marriage and continue one.