Trending Now
You are at:Home»Featured»Courageous is a Must-See Movie for Families.
By Katherine Andes on October 3, 2011 Featured, MyChurchParish.com, On TV and Movies 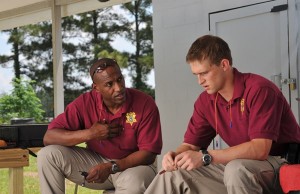 I attended the opening night of Courageous with some trepidation. I had seen Fireproof, made by the same filmmakers, and I had not cared for it. Fireproof was just “okay” and I gave it an “A for Effort,” but, to my mind, the Christian message was too on-the-nose.

But, last Friday night, some friends wanted to see Courageous, so I tagged along. Boy, was I in for a surprise.

Courageous was one of the best films I’ve ever seen. In a screenwriting class I once took with the famous Robert McKee, he had taught that you will know if a film is good within the first ten minutes. Courageous had the audience hooked within a minute!

We were instantly engaged in the gripping opening sequence — excited and worried about the outcome. The film never missed a beat from that moment on.

Courageous is the story of four policemen and one workingman who are compelled to confront how well they are performing as fathers on the deepest levels.

For a long time, the film felt like an ensemble piece with all of the characters being equal. But one character eventually emerges as the leader and protagonist. Most all of the acting is performed well. I say “most” because in a couple of instances I could be picky about the delivery of a line or two, but then I would be nitpicking.

I don’t want to divulge the storyline at all as it may lessen your enjoyment. I will say that the audience I was in was filled with police officers. And they were thoroughly engaged in the storyline and seemed to be identifying with the onscreen police situations.

A very pleasant surprise was the clever screenplay and all the comedy. The lines were delivered with perfect timing. At times the audience was howling with laughter.

Yet, during the sad and poignant moments, you could hear a pin drop and people sniffling.

The “come to Jesus” moment was done realistically and compellingly. It did not come off as a cliché.

Courageous is a must-see movie for families with older children. Some of the violent scenes would be difficult for little ones. I strongly encourage you to take your teens to it. It will give them a lot to think about.

P.S. This film was made by Protestants, so it does have a Protestant sensibility. But there’s nothing in the film a Catholic would object to.