Trending Now
You are at:Home»Featured»Cultural Alert! The Disappearance of Heroes – Perception or Reality?
By Luke Hamilton on November 10, 2013 Featured, The Social Order 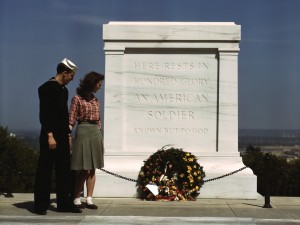 Tomb of the Unknowns, Arlington Cemetery, May 1943

Our stories are changing. Wonder and Beauty slowly eke out from our world, unnoticed and unmourned. I used to think it was a natural cessation from the Neverland of youth; a necessary immigration from the immature trappings of youthful imagination to the logical constraints of a moribund maturity. However, I’ve found that this is not just my perspective, draining of imagination and wonder as I age. Our stories, our heroes are changing. Our children seem less prone to idealism, more immune to wonder; and this points to a tidal shift in the culture itself.

If you watch or read any contemporary fiction, often the hero of the story isn’t very heroic and the villain isn’t all that villainous. The hero might still be likeable and usually emerges victorious, but he’s a flawed and fallible creation, spawned by a culture growing terrified of morality. Instead of iron will and indomitable moral strength, our heroes are “complicated”. They dabble in addiction or are lovably lecherous. They have perverse sexual appetites or find themselves drawn to the “dark side” of humanity. Most often, they are weak and conflicted instead of strong and steadfast, as in times past.

Conversely, most villains are no longer depictions of the evil which exists in the dark recesses of our human capacity. They are usually more likeable than their whiny counterparts. Their immorality is mitigated by their snappy dialogue or the glimmers of morality we glimpse behind the unscrupulous behavior. Take Stannis Baratheon vs. Tyrion Lannister from Game of Thrones. Stannis’s draconian morality is upstaged by Tyrion’s charming debauchery. The author shows us that Stannis’s moral certitude was just a mask covering his unabashed lust. We find ourselves rooting for the immoral character because the author puts him in better packaging, causing us to question our own moral foundation. After all, we don’t want to be like Stannis, do we? The Imp is so much more fun…

If any character does demonstrate unbending moral fiber, he or she is usually the punch line, later in the story. Case in-point, Homer Wells in John Irving’s Cider House Rules. The book received hefty acclaim, with the film taking home two Oscars. In it, Homer is a pro-life orphan who sees the world through a morally-absolute perspective and speaks out against the horror of abortion, which he observes while assisting the orphanage’s doctor in his medical duties. As the story progresses, the author forces Homer to realize his “foolishness” through a series of contrived circumstances which ostensibly demonstrate that absolute morality is only for the naïve or sheltered and that his moral certitude should be tempered with a healthy dose of relativism.

What is happening here? Are we all just growing up and seeing the world more clearly through progressively mature eyes? Are we finally throwing off the chains of Victorian morality and embracing the hedonism seeded in the 60’s and 70’s? It is my contention that the forces at work in this world have decided to attack the concept of heroism itself. We have an enemy which seeks to sow confusion and despair whenever possible and the elimination of a hero accomplishes both.

Much as the figure of the father is under assault in the social arena, the hero is a target in the realm of entertainment. Both objectives accomplish the same task: a mournful, truncated existence, spent wandering through a maze of moral confusion. If we have no heroes, then we have no higher plateau of achievement and accountability for which to strive.

To combat this phenomenon, it is important to hold tight to our heroes, cementing them in our minds. For me, that honor belongs to two groups – the hero of the Christian faith and the American soldier. Both are ready to pay the ultimate price for that which matters the most. Both are comprised of fallen, faulty mankind, but also share the purity of intention to give their life for another; the soldier for his brother beside him and his countrymen at home, the Christian martyr for his Savior who first shed His blood for all.

Not all of us are cut from the cloth of a hero, but we too serve an important purpose. A hero lives on in the stories told by generations following. This Veterans Day, let us take the time to remember and teach about a hero. Not the conflicted and worldly type of heroes so prevalent today, but the type who lives up to the billing and inspires all who hear their tale.

Not all of us can perform the deeds of heroes of the faith. But we can admire, love, and rejoice in them. We can battle unceasingly against the guile of oblivion that threatens the life of the hero. Mirrored in the love of the admirer, the deeds of the hero will appear even more beautiful than they were in reality. The admirer makes of the hero, who was also only human, a legend.