Trending Now
You are at:Home»Columnists»Patton, Ike, and my Teenage Boys
By Dr. Paul Kengor on November 10, 2013 Columnists, Featured 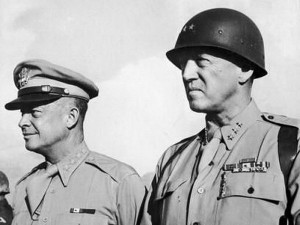 I recently took my two teenage sons to a talk by Frank Kravetz, a 90-year-old World War II veteran who survived Hitler’s Nuremberg prisons. Frank published his story in a memoir, Eleven Two: One WWII Airman’s Story of Capture, Survival and Freedom.

Frank’s ordeal began in November 1944 during a bomb-run over Germany. He took his regular position, crammed into the tail of a B-17. The target was Merseberg, a major industrial area. He flew amid an air armada of 500 heavy bombers—each carrying eighteen 250-pound bombs—escorted by 900 fighter planes.

While the Americans were ready for business, so was the Luftwaffe, which set aside every aircraft to defend Merseberg. Frank’s plane came under hot pursuit by German fighters. Frank took them on with a twin .50 caliber machine gun. It was a dogfight, and Frank was shot badly. His B-17 was filled with holes. The crew had to bail.

Frank was bleeding profusely. His buddies tried to get a parachute on him, but it opened inside the plane. They wrapped it around him, trying not to cross the chords, and tossed him out. To Frank’s great relief, the chute opened. Instantly, the deafening chaos quieted, and Frank floated like on angels’ wings.

The tranquility halted with a rude thump as Frank hit the ground and tumbled like a shot jackrabbit. German soldiers seized him.

Frank’s liberation came April 29, 1945, by Gen. Patton’s Third Army. For any fan of Patton, Frank’s account will bring a lump to your throat: “After the flag was raised, and within a few hours of our troops arriving in camp, Gen. Patton rolled in, sitting high in a command car. His very presence was awe-inspiring. I stood there staring at Gen. Patton, our liberator, appearing larger than life.” Thousands of emaciated, ecstatic POWs chanted, “Patton! Patton! Patton!” Some fell to their knees, overcome with emotion. Standing in the car, Patton seized a bullhorn and spoke: “Gentlemen—you’re now liberated and under Allied control. … We’re going to get you out of here.”

As Frank was moved out of his camp en route back home, he had a stop in Rheims, France. There, just as unexpectedly as encountering Patton, he sat in a room with fellow wounded GIs when he looked and suddenly saw Gen. Dwight Eisenhower stroll in. The soldiers jumped to their feet to salute the Supreme Allied Commander. “Sit down, boys,” the former Kansas farm-boy humbly said, “I should be standing for you.”

Frank eventually got home, first arriving in New York City and then hitchhiking all the way to East Pittsburgh. He unceremoniously arrived at his folks’ front door—no trumpets, no dramatic music, no parade. He hugged his mom and dad and sat down. He found his sweetheart, Anne. They’ve been happily married ever since.

As Frank recently shared his story in a classroom at Grove City College, my two teenage sons were riveted. After his talk, they met Frank, who eagerly shook their hands.

As he did, I was struck by this realization: If my teenage boys live to be Frank’s age, they’ll live to nearly 2090, roughly 150 years after World War II. They’ll be able to tell teenage boys that they shook the hand of a World War II veteran who met Generals Patton and Eisenhower.

That’s an amazing thought. It would be like any of us right now meeting an elderly person who met someone who stretched back 150 years to the Civil War, someone who stood in the presence of Ulysses S. Grant or perhaps even Abraham Lincoln at Gettysburg.

Gee, when you think about it that way, America doesn’t really seem all that old.

Indeed, we’re not. Like Darren, like my sons, I encourage everyone to meet these vets before they pass on. Hear their stories. Someday you’ll be able to pass on your own story about meeting someone from that old war not-so-long ago.