Trending Now
You are at:Home»Featured»Daily Hardship for Christians in Egypt
By ACN-USA News on January 14, 2014 Featured, International Issues, Those in Need 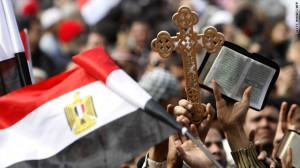 Life is not easy for Christians in Egypt, and the strain is taking its toll. Beyond the reports of churches burned and homes attacked, there is also a more subtle hardship affecting ordinary families. While not universal, mistreatment and discrimination are unfortunately all too common.

“Every day we leave our house, not knowing what will happen,” says Girgis, an Egyptian Catholic from Helwan, a city south of the Egyptian capital of Cairo, who preferred not to use his real name.

“But this is the Christian way, to take things day by day,” he added.

Girgis describes his normal routine as commuting to work, coming home, going to church, perhaps visiting relatives, but avoiding for the most part significant interactions with society.

Many Christians increasingly tend toward such isolation, he explains, though as a man, he says, he can blend in and escape the worst.

For his wife Maria (also not her real name), things are much harder. Christian women in Egypt, especially in lower-class neighborhoods like the one in which she and her family live, stand out for not wearing a head covering, which sets them apart from the great majority of Muslim women.

A mother of a three-year-old daughter and a one-year old son, she says their modest neighborhood in Cairo is all they can afford.

Reliance on public transportation is part of the family’s lifestyle. Beat up minivans cram up to 12 passengers in like sardines, taking them across town for the equivalent of 15 cents.

“The other day, I was climbing into the van with my two children as usual,” Maria tells her story, “and I called out the name of my neighborhood just to confirm. But the driver said he wasn’t going there, so I got out to ride in the correct one.”

“But then a Muslim woman came on board and asked for the same neighborhood, and the driver let her in, taking the last place. I was outraged and complained, but the man replied, ‘I’m free to let in who I like and force out who I like.’”

Within the past year, similar incidents happened half a dozen times. It is not a daily occurrence, but it leaves a painful wound, especially when repeated with such regularity.

“I was walking with my daughter, carrying my son, on a very hot summer day,” Maria relates. “So I asked a merchant to sell me an umbrella for shade, but he said he didn’t have any. ‘Sure you do,’ I said, pointing, thinking he didn’t see them in the back. He replied coldly, ‘Yes, but I’m not selling them to you.’”

Such blatant hostility and discrimination are not universal. Maria works in a middle-class neighborhood not too far from home where she says she is treated with more respect.

On the national level, Muslim and Christian leaders exchange greetings and politicians promote the idea of national unity. But for Girgis, such gestures are largely superficial.

“Tolerance and acceptance of the other are missing,” he says. “The books and sermons that speak of these concepts do not reach the ordinary people in the lower class neighborhoods.”

Since the revolution he has noticed a decline in general civility, which he believes is not connected to religious issues. But the surge in religiosity among many Muslims has tended to highlight the divisive elements of their faith.

“In my experience it is clear,” argues Girgis. “There are things in Islam that are against Christians. We shouldn’t deceive ourselves; this is what the Qur’an says.”

Maria, who works in a nursery, agrees. “The parts of the Qur’an they are teaching the kids to memorize tend to be the ones that lead people to hate the other,” she says, adding that “they don’t choose the ones emphasizing prayer, or the verses which say that the other may be different but that he has his own religion and you have yours.”

Local mosques also contribute to a culture of discrimination. Every Friday, sermons echo through the neighborhood via loudspeakers set up on almost every street corner.

“The religious language has changed: ‘Hate this person, he’s not one of you, don’t associate with him,’” Girgis reported. “Sometimes they will even call us infidels, claiming that we don’t believe in God. But how can you enter someone’s heart to know if they are a believer or not?”

“I try to be a Christian,” she said. “I try to be kind, but I also try to show the person this behavior is not appropriate.”

It often makes little difference. In fact, witnesses to her mistreatment usually downplay what happens, telling her it’s ok, or not to worry about it.

She does have good relations with Muslims in her apartment building; she even freely tutored a neighbor’s child in French, without charging the family. Yet, as a family, they have few if any real Muslim friends, the couple affirms.

Girgis views the situation of Egypt’s Christians as follows: “There are two types of persecution: Physical, when you are threatened with death, and mental, which is worse.”

“If you are killed, it’s over. But if you are subject to mistreatment it may drive you to kill yourself. We are made to feel inferior. This is the persecution that is present in Egypt.”