Trending Now
You are at:Home»Featured»Daily Mass: Medicine for a Sick Culture
By Mary Anne Moresco on November 8, 2011 Featured, Live in Christ, MyChurchParish.com 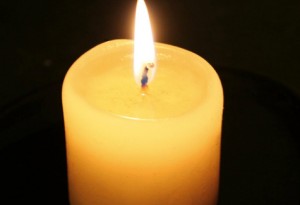 Rosie grabbed my arm as I walked into Mass one weekday morning. Whispering in a hushed tone she asked:  “Can you help me measure the candle?   I can’t reach the top of it to measure it.  I was helping to set up for a funeral, and I dropped the candle and broke the glass that goes on top.  I tried to order the glass for a four-inch candle, but they said there is no four-inch candle, so I have to measure it.  They said to measure the diameter, like this…”

I dutifully measured it and returned to my pew. A few minutes later, however, visions of high school geometry flashed through my mind.  I suddenly realized what I had measured was not the candle’s diameter.  I went to find Rosie.

“Rosie,” I whispered, “I think the diameter would cut across the middle of the candle.  I don’t think we measured it correctly!” So Rosie and I went back to the candle and remeasured.

A few days later, Rosie grabbed me once more before morning Mass.  She hadn’t ordered the candle top after all!

Whispering again, she explained: “I went to the church office to find out how to order it, and they said they would order the glass themselves. I told them I would pay for it, but they insisted that they pay. I thought: I broke it so I should pay for it.  But Father said he would not hear of it.  So I guess that’s okay.”

“Yes, that is perfectly okay,” I assured her.  It was obvious her conscience was tugging at her.

Rosie is a refreshing soul.  This  simple, aging woman of God is refreshing because she possesses an extraordinarily clean conscience.  Souls like Rosie are refreshing because, in our modern culture, someone who breaks another person’s belongings is less likely to hurry and replace it than to indignantly protest: “Why should I fix it? I was only trying to help! Anyway, it’s their candle, let them fix it!”

While God calls us to assume responsibility, modern society calls us to abandon responsibility. Modern mentality stipulates that an act is wrong only if you get caught doing it.  The thinking is no longer shame on me for committing an immoral act, but shame on me for getting caught. It is turning our society into a swamp of deceit and unaccountability.  Now we have college students who cheat on tests and papers (78-98% percent according to one report), spouses who can’t remain faithful (about 50%), and businessmen and bankers whose greed is corroding the economy.

Daily Mass reminds us that we are always and everywhere accountable to God for our actions; that God sees everything we do and hears everything we say.  Daily Mass calls us to examine our consciences, thus leading us to a life more pleasing to God.  Is it a struggle to get through Sunday Mass?  Ironically. the answer is not to attend Sunday Mass less often, but to attend daily Mass more often!  Daily Mass prepares our souls for the holy sacrifice in which we participate on Sundays.  Ultimately, it prepares us for heaven.

When I leave daily Mass, there are subtle smiles, twinkling eyes, and gentle waves from fellow worshipers.  We share the experience of that secret and mysterious communion with Christ that defines daily Mass. We know our God.  And we are united by our intimate encounter with Him before the altar.

What is the cure for cheating college students? The fix for unfaithful spouses? The solution for corrupt business tycoons?  Simple enough: Return to Sunday Mass and start attending daily Mass, too.  If we can get ourselves to daily Mass, we just might discover and learn from sweet, refreshing souls like Rosie.  If we can persevere in going for some time, and if we couple that perseverance with confession, then we might just find our own souls mysteriously transformed and brought closer to Father, Son, and Holy Spirit.  That’s what daily Mass has done for sweet souls like Rosie.  And that’s what it can do for all of us, sinners and saints both.