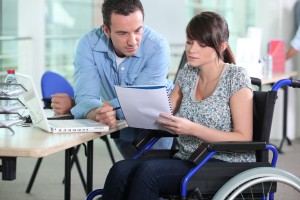 There’s a dangerous tendency in America today to view disabilities of various kinds as insuperable barriers to productive and loving service. There is often an implicit, and sometimes explicit, disrespect of a basic feature of human dignity in the treatment of those with disabilities as merely passive recipients of government aid, the objects of public pity. The reality is that each one of us, created in the image of God, has the capacity to be a productive steward of some kind, and this reality has the potential to reshape our personal perspectives as well as our public policy.

Our service of others may or may not be recognized by the marketplace as something valuable or worth paying for. But each one of us has something to offer someone else. All of us have ministries of one kind or another. Our very existence itself must be seen as a blessing from God. The Christianteachings regarding stewardship in a holistic and comprehensive sense capture this insight. As Lester DeKoster and Gerard Berghoef write, “The basic form of stewardship is daily work. No matter what that work may be.”

But what about those who cannot work? Perhaps it is because of some injury or disability that has developed that they can no longer work, or at least not in a way that they did previously. Part of the answer lies in expanding what our idea of “work” is. Work is, at its core, the service that we do to others. Commonly this service is remunerated; we are paid for our daily work on the job. But there are innumerable forms of service for which we are not paid. This too is work. So in this sense someone on the factory line works just as the parent who changes a diaper works. This is why careful discussions about work often distinguish between “waged” work and unpaid work, or work inside or outside the home.

DeKoster and Berghoef go on to observe that “the forms of work are countless, but the typical one is work with the hands.” This idea of the basic nature of such “hand” work comes through in terms likemanufacturing, which has its roots in the Latin for “made by hand.” Indeed, we often still associate work of the hands with specialty goods, craftsmanship, and quality. But again, what about those who aren’t able to work with their hands? Is there a way for them to continue to serve others as good stewards through their work?

Consider the case of Andy Phelps. At the age of 15, Andy was in a car accident that killed two of his friends and left him without the use of his hands or legs. He had been an athlete and a juggler. He had been a craftsman and, literally, a “handiworker.” His story is presented in the powerful short documentary film Juggle & Cut.

Today Andy is a video editor. He uses his mouth instead of his hands to manipulate digital images. But he still works and takes pride in his work. From the view of most of us, who have the use of our hands and legs, Andy is disabled. But his disability has not left him without an avenue for productive service of his fellow human beings. It has not left him without something significant to be a steward of.

Andy’s example, and others like it, should transform our thinking about disability and stewardship responsibility. It should also transform our public policy. America is facing a long-term disability challenge of monumental proportions. Recent Social Security Disability Insurance (SSDI) figures show that a record number of people are on disability today. As Cornell University’s Richard Burkhauser writes, “This recession-induced growth exacerbates the long time trend in SSDI program growth that has resulted in its real expenditures increasing sevenfold, from $18 billion (2010 dollars) in 1970 to $128 billion in 2010, a trend the CBO reports will result in program insolvency as early as 2016.”

The vast majority of people who go on long-term disability never leave the rolls. In many cases, this makes sense. But in other cases, the incentives of disability insurance and the assumptions implicit in our policy and our treatment of those on disability reinforces the lie that those who are disabled have nothing positive to offer. We should encourage those who are disabled, both personally and in our policy, to find ways to serve others, whether in the form of waged work or not. In some cases, this means that people will one day be able to do without public assistance. For others, this will mean serving in other ways while continuing to receive private and public aid.

But in either case, each one of us has some service to render to others. The story of Andy Phelps shows us that. We need personal attitudes, communal practices, and public policy that respect that truth.