Trending Now
You are at:Home»Featured»Do All Dogs Go to Heaven?
By Patti Maguire Armstrong on August 22, 2011 Featured, On Books 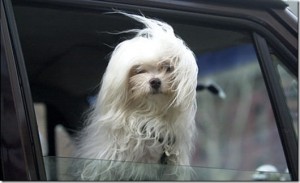 I’m an animal lover.  At this time, two dogs, a cat, and a hamster are part of our family.  For ten years, I’ve uplifted the spirits of nursing home residents and staff by bringing dogs in to visit. My kids and I regularly witness the power of our furry friends.   At one nursing home, there was a dog lover named Arvid.  His joy at hugging and talking to the two dogs we had at the time, a Collie and Newfoundland mix, was contagious. Watching him brought us as much happiness as the dogs brought to him.

Oftentimes, the health of the nursing home residents will deteriorate before our eyes, sometimes rapidly.  At one point, many months passed with Arvid always sleeping when we came. Still, he had been our favorite so every week, we checked to see if he was awake.  For months, he never was. But one day, we peeked into the room and saw him in a recliner with his eyes open.

“Hi Arvid,” I called. “Would you like to visit with our dogs?”  His eyes widened and his arms opened. Sophie, our Newfoundland/mix, laid her head on his chest. Arvid mumbled excitedly although incoherent to us.  He hugged our dog and kept talking to her.

The kids and I rejoiced. Arvid was back! Then, a staff member walked by the room and looked in. “Hey, everyone,” she called down the hall. “Come here and look at Arvid!” Several staff members gathered. “Look at Arvid!” they kept saying as more staff gathered. Not until then did we learn that no one had seen the old Arvid for a long time. He had been totally unresponsive for months.  But that day, for a short while, Arvid was back.

A Matter of Degrees

Animals have touched our family in many ways throughout the years.  I love them. I also eat hamburgers.  For that, some animal lovers would claim I’m not one of them.  Fanatic animal rights activists have taken the beauty of God’s creation — all creatures great and small — and elevated the non-humans among us above their state in life.

We’ve all heard the tales of animal rights activists who storm research labs or organize flights to free lobsters from supermarket fish tanks.  As an animal lover, I’m totally opposed to any undo suffering or abuse of animals. Those critters have feelings too.  But opinions are a matter of degree and I draw a line between humans and non-humans.  For instance, I found it irritating a couple summers ago, when a man and woman from Germany expressed their distaste that I was catching crayfish with my boys. “It’s fun for you, but not for them,” he told me. I just smiled and did not share with him how good they tasted with a little butter.

We have a soul and conscience and are above animals. God gave them to us. We will live for eternity and animals…. what happens to them when they die?  Is that the end?  Or is there a place in heaven for our furry (and scaly, shelled, and feathered) friends? 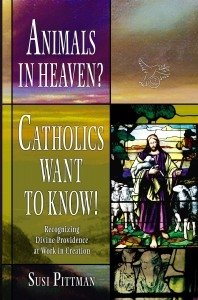 The Catholic answer might surprise you. The standard assumption is that no, animals don’t have eternal souls, they are here for us on earth, and they don’t go to heaven. Is that the official Catholic teaching, though?   In the book, Animals in Heaven?: Catholics Want to Know! author Susi Pittman explores the possibilities and concludes that there is no official Catholic teaching and Scripture actually leaves the possibility of animals in heaven open.

Susi is an animal lover extraordinaire, but she is first and foremost a Catholic. It might surprise some that she is also eats meat.  She loves all of creation but not above the Creator. Her animal-loving heart led her to look for teachings and clues about the eternal fate of animals.   A week before her beloved husband Greg died, he told her, “Susi, you gotta do your book. God needs you now, not in the same way he needs me, but he needs you to bring comfort to souls about pets. You need to bring them the truth that we share in our faith.”

Thus, Susi completed her book. It has touched a chord among animal lovers; especially those who struggle to reconcile losing their beloved pets through death. Her website averages 700 hits a week, www.catholicstewardsofcreation.com.

Susi does not attempt to give definitive proof regarding heaven and animals, but only reflects on Church teaching and scripture.  The Church reigns supreme and its teachings on the Eucharist and Jesus Christ are integrated throughout the book. It’s as much about God as it is about animals.

There is a section on saints and their relationship with animals.  Naturally, St. Francis is included along with lesser-known saints.  Susi points out, “Catholicism recognizes the beauty in what Saint Francis preached on creation and it honors him every year with his own feast day, October 4, at which time the Blessings of the Animals take place.”

As much as I love animals, I never considered them in light of scripture. Susi focuses on some of those passages. “Throughout the life of Jesus, animals were called to be witnesses to monumental moments. Farm animals kept watch at His birth; the donkey carried the Holy Family into exile in Egypt; wild animals were with Jesus when He spent forty days in the desert and was ministered to by angels; and a donkey carried Him again into Jerusalem preceding his death — a donkey that was prepared for him by his own words.”

Scripture abounds in references to animals in both the Old and New Testament. It teaches us that God’s providence includes his animals, “Are not five sparrows sold for two pennies? And not one of them is forgotten before God.” (Luke 12:6).

Although the book is clearly written with hopeful thinking on the eternal plan for animals, Susi sincerely seeks the truth as she examines the tenets of the Catholic faith on the subject of life beyond this world for animals.  She rightly says that the state of one’s soul is not affected by whether one believes that animals are in heaven or not.

Susi delights in knowing that Pope Benedict XVI shares her love of both the Catholic Church and of animals. He has been an animal lover since his boyhood.  Stray cats often found their way to him. “There was a time when so many cats followed him to the Vatican that a Swiss Guard was heard to remark that he thought the cats were ‘laying siege to the Holy See.’”

Balance in all Things

I believe that it is when the love of animals becomes disordered that our own spiritual well-being is at risk.  Without God at the helm, some people put animals on a higher or equal plane with humans — spending inordinate amounts of time and money on them while having little left over for humanity.

The book Animals in Heaven? is both animal-loving and God-loving in a way that recognizes the hierarchy of nature. “We must remember, though, that animals are what they are. They are not human. All animals were created according to God’s own unique design and are hardwired differently in their relationship with the Creator than is humankind….” To set her book apart from the fanatics, Susi states, “No animal can be more important than a human soul…” She contends that it is also wrong to obsess over them.  Rather, their rightful value is as gifts given to us by God, to be loved and appreciated, but not equal to us.

In response to God’s love, humans were to govern creation with goodness and compassion, cooperating with God’s holy will. That is part of Catholic teaching.

Susi mentions that the booklet, Renewing the Earth is available from the United States Conference of Catholic Bishops, as a tool for Catholics to understand God’s call to stewardship of the planet. It invites Catholics to love and care for God’s creation as his gifts to us. By making a personal commitment to become a Catholic steward of creation, you are cooperating with God by living in harmony with his creation.