Trending Now
You are at:Home»Learn & Live the Faith»Evangelization»Do Small Things with Great Love
By Mike Eisenbath on April 3, 2015 Evangelization, Featured, Live in Christ 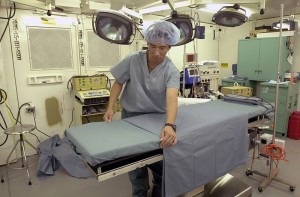 The older I get, the more time I spend enduring medical exams and “procedures.” Never willing to waste time, I often pray in my moments alone while waiting. I’m also fond of chatting up and observing people. That can provide flashes of grace.

Recently, I was laying on a hospital bed in expectation of being wheeled into a room for a procedure. The curtain in the room was opened, which gave me clear view of a hallway. I watched an older man, probably in his early-to-mid 70s, as he was preparing another room like mine for the next patient. I saw him change the pillowcase, then strip and remake the bed.

And I was mesmerized watching him wash the bed.

Using disinfecting wipes, he deliberately cleaned the mattress — not just giving it a once-over, but intentionally mopping every inch, top and side. He moved over the metal frame of the bed — again, every inch of metal was touched by the wet sheet in his hand. There was a metal pole used to hang an IV bag or other necessary solutions on the back of the bed; he disinfected that pole up and down, including the curve at the top. There was no aspect of the bed that the gentleman didn’t rub down.

Clearly, at some point in his life he had learned the truth of “any job worth doing is worth doing well” as the right approach to a task. It was more than his work ethic that captivated me, though. He wasn’t slow. Rather, he moved with a purpose, a quiet motivation that reflected a true desire.

It looked like a prayer. If it wasn’t specifically a prayer for that man, it became one for me. I considered how much some of my great heroes of faith would agree.

Brother Lawrence was a lay brother who lived in a French Carmelite monastery in the 17th century. He worked primarily in the kitchen and for a while repairing sandals. Yet despite that relatively low station and his lack of education, he provided treasured spiritual direction and wisdom to many. In a book of his thoughts complied after his death, Brother Lawrence said: “We ought not to be weary of doing little things for the love of God, who regards not the greatness of the work, but the love with which it is performed.”

Mother Teresa said: “Not all of us can do great things. But we can do small things with great love.”

And from St. Therese de Lisieux: “You know well enough that Our Lord does not look so much at the greatness of our actions, nor even at their difficulty, but at the love with which we do them.”

For Jesus, that involved being bread broken and wine poured out. That involved washing the feet of others.

So often, we pray asking God to show us what to do. Being human, most of us would like it to be a job or activity that provides comfort, reward, affirmation, personal happiness, maybe even a little glory. God might grant that opportunity, but often He puts us into places where self-less service is possible. The reward shouldn’t come from the comfort provided by a job or from glory or honor. Rather, it should come from doing everything, great or small, as an offering of praise to God.

In moments, the man who had cleaned the bed approached me with a wheelchair. He pushed me through the maze of halls to the front doors of the hospital, then waited with me while Donna went for the car.

“Is this a volunteer job for you?” I asked him.

“Yeah, I retired a few years ago,” he said. “This gets me out of the house, gives me something to do. They said I could work at the front desk, but that was just sitting. I wanted to work. I’ll tell you something: All the people here really appreciate it.”

So do patients who are looking for time with God.

This column appeared previously in the St. Louis Review.