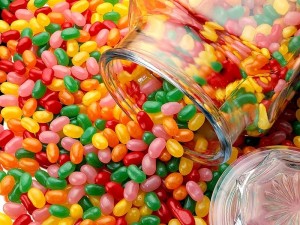 Even a small child would know that the jar does not reveal enough information to know an unknown total. Yet this is exactly the trickery the “reproductive freedom” powers-that-be in the United States are trying to pass off on the public.

It is being claimed that the “birthrate for U.S. teens is the lowest in history“ because a new report from the Centers for Disease Control and Protection (CDC) says that ”the U.S. teen birth rate declined 9 percent from 2009 to 2010, reaching a historic low at 34.3 births per 1,000 women aged 15–19; the rate dropped 44 percent from 1991 through 2010.” (Report is here.) This is being attributed, in part, to the increased use of contraception and tied to the HHS contraception mandate. Surprise!

“The report by the National Center for Health Statistics says the actual number of teen births in 2010 was the lowest since 1946. It credits “strong pregnancy prevention messages” and says contraceptive use “may have contributed.”

“The analysis comes at a time when contraception is a hot political debate, from a congressional investigation of whether federal money pays for abortions to concern among some church leaders over an Obama administration mandate that all health insurance cover birth control.” [Source USA Today]

The reproductive health folks point to this statistic and say, “See you backward Catholics! We told you that contraception works. Or do you just want teen girls running around the country becoming mommies so you can punish them?” And so will ensue, from the blind followers, cat calls of misogyny and wars on women. Only now it’s even going to be a war on teens. Watch for it. There’s a political jargon term used to describe uninformed people who allow themselves to be manipulated as propagandists and used by the leaders of a cause to achieve goals they do not understand…but it’s pejorative so I won’t use it. Adults should know better though. Here’s why this number is meaningless.

The CDC does not require abortions to be reported and unless we know how many teen pregnancies were aborted, we don’t know the total number of teen pregnancies that were discovered. The CDC has never required abortion reporting, and they still do not. From the CDC website:

“Are states required to report their abortion statistics to CDC? No…

Sure some people say, “Oh, the estimates are pretty close so we can extrapolate.” Nonsense! Even in states that choose to require abortion reporting, there is absolutely no regulation of the reporting. Abortion clinics literally make the choice (they love choice!) to put information on a form and submit it to the state, or not. No regulation. They could toss the paperwork out, never fill the paperwork out at all, or fill the forms out dishonestly. It’s a black hole. Likewise, once the state agencies have the clinic information submitted, there’s no accountability to the public for methodology or accuracy for even reporting the data they receive. The states report whatever number they want to report, period. It is a fabricated number.

Abortions + Births = Pregnancies. If we don’t know the first number, we can’t know the last. Don’t be fooled. This new CDC report of the ”lowest teen births in all of U.S. history” is misleading, a sham to push an agenda. Only this isn’t child’s play and candy – this is human life, religious freedom, and the integrity of the future we actually do leave to our children.