Trending Now
You are at:Home»Featured»Just a Minute?
By Theresa A. Thomas on April 17, 2012 Featured, Live in Christ, Women 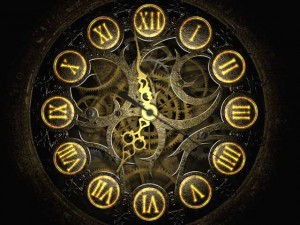 As I pulled out of the high school parking lot yesterday after dropping off my daughter, I noticed a long line of cars waiting to turn in.  Blinking turn signals flickered in the early morning light and I couldn’t help but notice how the traffic had exploded since the time I had arrived. My daughter and I had experienced an easy in, and an easy out, whereas the drivers waiting clearly had not.

The difference in time between our arrival and theirs? Really, just a minute.

In the mid-1990s, I had taken my (then) four little children swimming at the pool. After enjoying a few hours splashing in the water with them in the late afternoon, I had changed their clothes in the dressing room, folded the towels, gathered the goggles, lugged the inflatable rings, arm bands, diving sticks and a cooler that held our snacks, and loaded up the stroller with the stuff and the children. After transferring this all into the trunk and finally buckling everyone in my oldest whined, “My baaaaaaaathing suit… I think I left it in the dressing room!” I really didn’t want to unbuckle everyone and trudge back in. It was past dinnertime and I was tired. I knew the lifeguards would find the suit and set it aside. I could call when we got home; we could pick it up tomorrow. But my son wailed and carried on and I decided finally to unbuckle everyone and go back to retrieve the much loved suit. It was right where he had left it, and it had just taken a moment to retrieve.

On the way home I noticed the traffic was horrible. Cars were backed up for miles. I craned my neck to see what the hold up was. As we inched forward I saw that there had been an accident, a terrible, terrible accident, on our side of the road. Listening later to the story on the news, the announcer recounted the driver’s death at the scene and said that the uncharacteristically strong evening summer sun had temporarily blinded the man, the driver of the vehicle in the accident I had seen. The ensuing crash of the car killed him.

I already knew that the man was traveling on the same road in the same direction that I had been that day but knowing the accident was likely caused from merely the sun’s position and glare gave me the chills. Then I heard something else that has haunted me ever since – the exact time of the accident was precisely the time our little mini van would have been at the place that the accident occurred if we had simply come home after swimming. Had I not gone back for my son’s bathing suit, our vehicle would have been in the identical place that the temporarily blinding sun shone and the accident occurred, making it distinctly possible not only that the accident could have occurred to us, but it might even likely have occurred to us.   The difference in time between the now dead man’s traveling time and ours? Once again, just a minute.

So many things are – or are not – on account of just a minute. We’ve all read stories of the September 11, 2001 terrorist attack tragedy where people who worked in the Twin Towers were supposed to be at work, but one little thing triggered another and they ended up not being there. One dawdled for second cup of coffee; another lingered in a grocery store; one stopped for a Band-Aid… Just a minute can make a lifetime-or-death difference.

“Just a minute” is so significant. In just a minute you can utter a heartfelt prayer that changes a life, lock eyes with someone you love, conveying a feeling of understanding or emotional and physical yearning, enjoy God’s goodness in the chortle of your chubby baby boy, catch a 12-month-old first-time walker from a nasty tumble, capture a whiff of the perfume your teacher once wore and immediately be transported back to kindergarten in the third desk from the left next to the window… In just a minute you can look your husband in the eye, straighten his collar and kiss his nose. You can hug your uniformed, dirt-covered football-playing teenage son after a game, see the tears in his eyes and whisper you’re proud of him.  You can smile, or frown, encourage, discourage, curse or give thanks. Love or hate. All these things, in just a minute.

Time is God’s gift to us. Our choices are little stitches in a piece of fabric, which is colored and patterned by God’s providence, chosen just for us. The direction of the stitches, the size of the stitches, whether we stitch is entirely up to us.  What do we do when we waste time? We give away something more valuable than money, more beautiful than a well-made garment. When we waste time we squander the very fabric of life, and lose so much more than… well, so much more than just a minute.

In less than or just a minute we can:

These things are not big deals in and of themselves… or are they? What if a book is not begun? It will be left unread.  Will that result in an idea not thought, a dream not lived, a person not bettered, a little piece of the world unimproved? What if a baby’s diaper is not changed? A child’s nose not wiped? Not the end of the world, you say, but a rash or dirty face will ensue. What happens when a prayer is unsaid? If we believe that God listens and in a mysterious way our prayers can actually change the world for the better, what happens if we don’t bother? What happens when a car is not stopped when it should be, perhaps when a child runs in front of it? How is the world different because of one-minute choices made, or, by default, not?

What is the value of a minute? We are born in a minute. We die in a minute. In fact, a minute literally can be the difference between life and death for an infant since an abortion in the United States is legal a minute before birth, and illegal just a minute afterwards.

In just a minute we can sweep off the porch of dust and dirt. We can open a window. We can inhale a breath of fresh air. What is the porch? What is the dust? What air will we breath in for just a minute and what changes will that bring?

In math, a complex problem can be broken down into little steps. A simple addition or subtraction error in one of those steps can make the whole problem wrong.  Author Darren Hardy writes in his book The Compound Effect, that if the nose of a plane intended for New York is pointed just one percent off course in Los Angeles, the result will be the plane ending up 150 degrees in the wrong place, perhaps Dover, Delaware.  Small things mean a lot, and if the accurate completion of a math computation is important (as any engineer or high school student will attest that it is),  and if making it to a prescribed destination is important (as any cross country traveler going to an important meeting or family Christmas dinner will tell you it is ) then how much more important is using wisely the small component of the very thing that makes up our the years of our lives… time?

Our lives are made up of years, broken down into months, days, hours. Ultimately it is made up of minutes. What will we do to make the most of ours? Do we have, will we make, what will we do with just a minute

“Somebody should tell us, right at the start of our lives, that we are dying. Then we might live life to the limit, every minute of every day. Do it! I say. Whatever you want to do, do it now! There are only so many tomorrows” (attributed to several sources, including Pope Paul VI).