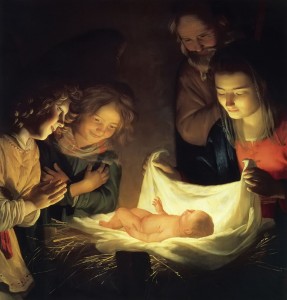 Adoration of the Child by Gerrit Van Honthorst

If properly understood, the Christmas holiday would be enough, not only to end abortion, but to destroy all sin.

Even sentimental secularists wince when they connect the feast of Jesus as a Baby with the millions of discarded unborn. As resourceful people, they change the subject or take shelter in a quick mental hiding place of their own construction.

But Christians, especially in the pro-life movement, would benefit from dwelling on the meaning of the Incarnation.

At Christmas, all the world adores Jesus as the babe in the manger. They may revel in the teachings of kindness and hope that Christmas ushered in. Some look forward to the redemption wrought through the Cross.

But it is that Infant humanity, as well as His divinity, that saves us.

Our savior united two seeming warring natures by becoming God and man at the same time, and for eternity. Where once he dwelt in splendor in Heaven, He deigned to be born as a human being, with all its exigencies, uncertainties, and trials. At the same time, He never ceased being God, to Whom hosannas ever ring. In Him these two natures were joined but not mixed, united but not diminished.

He showed that this feeble flesh – in whomever it may be found – is capable of being warmed by the concealed, blazing fire of the Godhead. Mankind, once linked only by sin and a constant race toward further degradation, are now joined by sharing the potential that can be unlocked in faith in Christ, to mature “until we all come in the unity of the faith, and of the knowledge of the Son of God, unto a perfect man, unto the measure of the stature of the fulness of Christ” (Ephesians 4:13).

In manifesting this reality at Christmas, He lifted mankind to its greatest dignity. In awe at the concept, a stunned St. Athanasius the Great wrote that “God became man so that man might become god.” By this, he did not mean a pagan pantheism but that human nature, vested in divine grace, appears to God in the shared perfection of Christ. It also means that Christ, Who became the perfect human being, has granted His children the dignity of spending eternity ever growing to become more like Him.

This divine sharing was not restricted to any particular time, or place, or people, but to all of humanity – it was the Gift for all God’s children.

We are all called and all gifted by His presence. It may be heeded to greater or lesser degrees as we incline to become saints or sinners, but the unity of all with the Child of Bethlehem and with one another remains constant.

Even John Lennon, in a song promoting non-Christian religion, understood that man had, “Better recognize your brothers, everyone you meet.”

The Incarnation means all wars are civil wars, all murders are suicides, and hatred is masochism. It means anything that defames humanity is blasphemy. It means all abortion is a manifestation of our own hopelessness and despair.

May Christ be born in the lives of newborns, as well are ours.