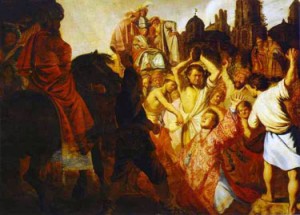 The early Church had a rough go of things.  In addition to the refining of orthodox understanding of Christ’s teaching and intentions regarding the Church it was a challenging time internally, as some controversy resulted from those who felt that converts should be required to undertake the entire law.  The Council of Jerusalem resolved many of these controversies, at least officially.  The Church faced even more and deadly challenges from without, as great persecutions beset the Church in the first three centuries, the age of martyrdom.  For speaking out, for professing the name of Christ — even being acknowledged as a possible member of the Catholic Church — brought denunciation, arrest, and for many, eventual martyrdom.

A young man named Stephen was chosen as one of the first deacons of the Church.  The choosing of deacons resulted from an internal struggle.  There were disputes between those who spoke Greek and those who spoke Hebrew regarding distribution of food and most likely other matters.   There began to be arguments and questions of fairness, perhaps partiality based on language group.  The Apostles, the first bishops of the Church, had to divert their attention from their missionary activities to these mundane, everyday disputes.  So, men were chosen to work closely with the Apostles, but to see to practical, everyday matters.  Stephen was among those chosen and ordained to the order of deacon.  As a deacon, Stephen was also called upon to preach, and to share in this missionary thrust of the Church, and so he did, speaking the name of Christ before non Christians, bringing down upon him the sentence of death.  St. Stephen’s martyrdom was witnessed and concurred in by Saul of Tarsus, who had not yet undergone the conversion that would transform him into St. Paul.

Since ancient times, the Church has celebrated the birth of Christ with great joy, but also remembered the sacrifices of those who gave birth to the Church.  This helped to remind the early Christians, as it also reminds us today, that even amid joy a Christian must expect trials, be vigilant, and must be willing to undergo suffering.   That suffering, of course, gives birth itself to hope for eternal life.   The Feast Day of St. Stephen, deacon and the first martyr of the Church, is thus celebrated the day after Christmas, December 26th.  We celebrate his birth into heaven with great joy, realizing that the birth of the Church requires of each Christian great sacrifice.

In our own lives we wish to occasion the incarnation of Jesus in souls.  We want to be Our Lord’s instruments, so that others will join us in the Church, and have that possibility for fellowship with God, for complete and ultimate happiness.  Although we are seldom called upon to make life-threatening sacrifices, some of our sacrifices can make life uncomfortable.  We challenge a relative for living in adultery, or for not raising their children in a moral way, and so we have to endure the scorn of our relatives, sometimes for years.  We speak out against immorality in society, and are branded a hater, a bigot or worse, and have to endure, even official, sanction at times.  We invite a friend or neighbor back to Church, and have to endure their scorn until finally, God willing, they accept our invitation and begin to direct their footsteps in the way of peace and union with God.

Today, as we continue our celebration of the Octave of Christmas,  we also celebrate St. Stephen, protomartyr of the Church, and we ask our Lord for the grace of endurance, of perseverance.