Trending Now
You are at:Home»Featured»Dying for the Truth
By Judie Brown on June 19, 2013 Featured, The Homosexual Agenda 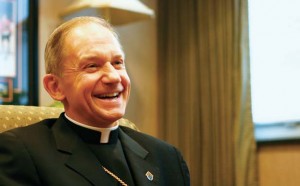 It never ceases to amaze me when people who refer to themselves as Catholic parse their words when discussing basic teachings of the Church. The impression is given that there is no such thing as indisputable truth, but rather an array of positions that are all equal and legitimate.

While such attitudes may bring peace of mind to some, they are anathema to others. Attempting to recast truth in the veneer of opinion can create many difficulties, and at the same time when taken to extremes, can cause tragedy. The following makes my point much better than mere opinion on a topic as controversial as homosexual rights.

When Springfield, Illinois, Bishop Thomas Paprocki agreed to debate Catholic dissident Sr. Jeannine Gramick on the subject of homosexual marriage, the title given to the event was “Two Catholic Views on Marriage.”

Bishop Paprocki immediately addressed the misleading nature of the title, saying, “I corrected that, since there is only one authentic Catholic view. . . . There are two views being presented here tonight by two people who are baptized Catholics, but only one of those views, the one I will present, is consistent with Catholic teaching, while the other view clearly dissents from Catholic teaching.”

The bishop delivered a speech before this debate and it is among the most inspiring that I have read. What compelled me to share some of his teachings was the story of his former secretary, Mary Stachowicz. While volumes have been written recently on the subject of what the media portrays as the plight of the homosexual, who is perceived as being a victim of discrimination, this story puts everything into the proper perspective.

Here is what Bishop Paprocki said:

A GoogleTM search on the Internet for the name “Matthew Shepard” at one time produced 11,900,000 results. Matthew Shepard was a 21-year-old college student who was savagely beaten to death in 1998 in Wyoming. His murder has been called a hate crime because Shepard was gay.

A similar search on the Internet for the name “Mary Stachowicz” yielded 26,800 results. In 2002, Mary Stachowicz was also brutally murdered, but the circumstances were quite different. Mary, the gentle, devout 51-year-old Catholic mother of four urged her co-worker, Nicholas Gutierrez, 19, to change his gay lifestyle. Infuriated by this, as he later told police, he allegedly beat, stabbed, and strangled her to death and then stuffed her mangled body in a crawl space in his apartment, located above a Chicago funeral home, where they both worked. I know about Mary Stachowicz, not from the Internet, but personally, because Mary was my secretary at the parish where I was pastor before I was named a bishop. She worked part time at the funeral home and part time at the parish. One afternoon, she didn’t show up at her usual starting time. This was unusual because she was always on time. A call to the funeral home disclosed that her car was still in their parking lot and her purse with her car keys was still at her desk, but there was no sign of Mary. As Mary’s family and friends prayed and worried about her disappearance, Gutierrez prayed with them. Three days later, her mutilated body was discovered in a crawl space in his apartment.

Both murders were senseless and brutal, and I condemn them both unequivocally. However, the fact that there are over eleven and a half million more Internet stories about Matthew Shepard than Mary Stachowicz indicates where popular sentiment lies today on the question of same-sex relationships. Shepard’s story has received such widespread attention because his homosexuality was the chief motive for his murder. Mary’s murder was widely ignored by the media, despite the fact that she died as a martyr for her faith.

My point is that, in the light of popular opinion today, I recognize that I have an uphill struggle to persuade people of the reasons why same-sex relationships should not be legally recognized as marriages.

Yet, the ethical or moral analysis of an issue is not properly based on polls or surveys of public opinion, but on values, virtues, and principles.

In addition to the point Bishop Paprocki made in his speech, we can add that, as is the case with much of what society advocates today, the disparity between the reporting of these two gruesome deaths exposes America’s cultural hypocrisy.

As a society steeped in hedonism, we do not value the dignity of the human being equally and without discrimination. We cannot tolerate truth when its objective definition is at odds with our personal choices, particularly as they relate to sex and its consequences.

As Bishop Paprocki so wisely said regarding same-sex relationships, “If you deny that there is such a thing as truth, that is, the truth, not just my truth and your truth, then the matter becomes merely an exercise of raw political power in terms of who has more votes to impose an agenda, and that is what makes it ultimately tyrannical.”