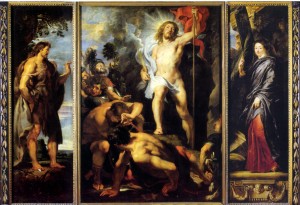 This homily was preached at the Cathedral of Sts. Peter and Paul on Easter morning, the  thirty-first day of March, in the year of our Lord two thousand thirteen.

My brothers and sisters in the Risen Christ:  For the forty days known as Lent we have been on a pilgrimage, journeying with Jesus and His Apostles.  Where has this pilgrimage brought us?  What have we seen?  Where will it end?

It began in a desert where Our Lord spent forty days preparing Himself for His life’s work.  At the conclusion of this time of prayer and fasting, he faced three temptations from the Father of Lies, Satan, once known as Lucifer before his fall from grace.

The journey continued throughout the length and breadth of the Holy Land.  We followed in the footsteps of the God-made-man who came to preach the Good News, heal the infirm, forgive sinners and console the suffering.  In these last days, we witnessed His triumphal entry into Jerusalem, the City of David that welcomed the Messiah descended from the lineage of David, as prophesied a thousand years earlier.  We sat at table in the Upper Room, as He washed His Apostles’ feet, and instituted the Sacraments of Holy Orders and Eucharist.  We wept with Him in the Garden of Gethsemane as He prayed for the courage to do the Father’s will.  We watched with shock as one of His own betrayed Him, and with growing fear as He stood before the Jewish Sanhedrin, before the Roman governor, Pontius Pilate, before the corrupt Herod.  We could not bear to watch the scourging at the pillar and the crowning with thorns. We followed Him to Golgotha and saw Him fall under the weight of a cross; we witnessed His humiliation as He was stripped, and cried out as the nails pierced His sacred hands that had healed lepers, raised the dead and blessed the children. We heard His seven last words, including His forgiveness for those who killed the author of Life.

And so we come to this day of profound joy because He who was taken from us has been returned to us.  An Easter without Lent, a Resurrection without crucifixion, would be empty of meaning and devoid of grace.  The cause of our joy rests in Jesus’ triumph over death, not His escape from it.  We are made happy because the very arms stretched out on the cross are now raised daily to baptize us, to confirm us, to forgive us, to marry us, to ordain us, to anoint us and above all to feed us with His holy Body and Blood, shattered and shed on Golgotha but made whole on Easter Sunday when the darkness of death gave way to the bright promise of immortality.

Our joy today is possible because of a journey Jesus made that brought Him to betrayal and suffering, through death to resurrection.  To the extent that we are His followers, to the degree that we embrace His teachings, so will we travel the road to Calvary as disciples who carry our cross daily, always in the hope that for those who love God, who are called in His name, all things will work out for good, until that day when each of us experiences his or her own personal Easter.  Know that just as Jesus died and rose, so will we too, if we have been faithful to the One who called Himself the Way, the Truth and the Life.

A blessed Easter to all of you and to your families who rejoice in a God who so loved us that He willingly died for us so that we could live forever in that eternal Easter where death is no more! Alleluia!