Trending Now
You are at:Home»Learn & Live the Faith»Catechesis»Book Review: Sacred Then and Sacred Now
By Kevin Symonds on April 3, 2013 Catechesis, Featured, On Books 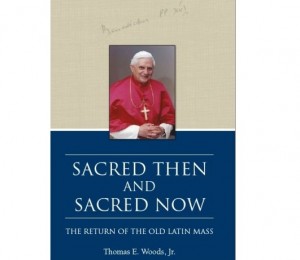 Dr. Thomas E. Woods, Jr., author of How the Catholic Church Built Western Civilization, has re-issued his 2008 book Sacred Then and Sacred Now: The Return of the Old Latin Mass.  In this book, Woods writes about Pope Benedict XVI’s famous Motu Proprio Summorum Pontificum, which allowed for the Roman Liturgy according to the Missal of 1962 to be celebrated by any priest of the Latin Church.

In this relatively short book, Woods provides a basic explanation and apologia for the 1962 Missal—now called by Pope Benedict the “Extraordinary Form” of the Roman Liturgy. Over five chapters, Woods’ discussion ranges from Benedict’s thinking on the Liturgy and its nature to answering a number of common misconceptions on the Extraordinary Form.

Woods begins by explaining the reason(s) why Pope Benedict allowed the 1962 Missal to be celebrated.  He walks the reader through various writings of Benedict—mostly as Cardinal Ratzinger—explaining that his “key objections” involved “matters intrinsic to the reform and others that dealt merely with its unfortunate byproducts” (pg. 6).  Some of the talking points include “manufactured liturgies,” a “desacralization” of the Liturgy, and even the contentious point of faulting the liturgical books themselves.

Once Woods discusses Ratzinger’s thoughts on the Liturgy, he then moves into Ratzinger’s actions with the Liturgy.  He gives a reasoned discussion on what he calls “Benedict’s Revolution.”  The title can somewhat throw off the reader if he or she does not have some prior background on the history and controversies behind Summorum Pontificum.  Issues such as the Society of St. Pius X (SSPX) and “Traditionalists” (so-called) are covered in this discussion, so the reader is shown just why the Motu Proprio is considered a “revolution.”

Having laid the above groundwork, in chapter three, Woods provides a brief walk-through of the Extraordinary Form in order to introduce the reader with its rubrics.  Writing for those “in the pew,” Woods explains the parts of the Mass, its theology, symbolism, prayers, etc.  It is a very helpful and informative guide and I would add “timeless” except for two minor points.

The second point is that Woods states it was Pope Leo XIII who instituted the prayers after Low Mass.  It was, in fact, Pope Bl. Pius IX in 1859 who instituted the prayers (Leo twice revised them in the 1880s).  This is a common misconception about the history of the prayers after Low Mass, but surprising in this context given Woods’ aim to provide accurate information on the Extraordinary Form.[i]  It is a minor point, however, and not something to become rattled over.

In chapter four, Woods takes the reader through various features of the Extraordinary Form.  This is where Woods discusses things such as male-only altar servers and kneeling to receive Holy Communion on the tongue —  by a priest, not an extraordinary minister of Holy Communion.  He explains the liturgical symbolism in each action and his discussion on why a priest alone handles the Eucharist is as beautiful as it is touching to the heart.

In the fifth and final chapter, Woods addresses a number of misconceptions people have about the Extraordinary Form.  Issues ranging from the language (Latin) to what Vatican II mandated for a liturgical reform are all on the table of discussion.  Some of the answers may surprise an otherwise uninformed reader.

In order to facilitate the reader’s understanding of the subjects presented in the book, Woods places appendices in the back.  These items include the text of Summorum Pontificum as well as the cover letter Pope Benedict wrote to the Bishops, some helpful resources, and the text of a homily given by Fr. Calvin Goodwin, FSSP in 2007 at the Shrine of the Most Blessed Sacrament in Hanceville, Alabama.

Overall, Sacred Then and Sacred Now is a wonderful book that will serve as a handy resource in any Catholic library.  Be it for personal use or in an academic setting, Woods’ reasoned and well-founded discussion has an appeal to both the simple as well as scholarly alike.

[i] I also noticed a particular omission in chapter three.  While explaining the texts of the Extraordinary Form, Woods translates the Latin texts into English.  Strangely, the text, “per omnia saecula saeculorum” is left un-translated by Woods, who opts to leave it in Latin and with no explanation.  A literal translation is “through every ages of ages.”  The Eastern Churches tend to translate more literally this text in their liturgical prayers whereas we render it something akin to, “world without end” (as in the Glory Be).