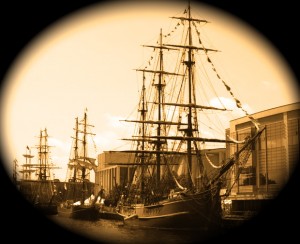 Ninety-eight years ago, Edgar Lee Masters penned his famous Spoon River Anthology, a towering work of poetry set in the graveyard of mythical Spoon River. It is a small town whose deceased residents speak frankly from beyond the grave about the gritty reality of what was their life on earth. The most haunting and instructive of these for me as a young college student was that of George Gray:

I HAVE studied many times
The marble which was chiseled for me—
A boat with a furled sail at rest in a harbor.
In truth it pictures not my destination
But my life.
For love was offered me and I shrank from its disillusionment;
Sorrow knocked at my door, but I was afraid;
Ambition called to me, but I dreaded the chances.
Yet all the while I hungered for meaning in my life.
And now I know that we must lift the sail
And catch the winds of destiny
Wherever they drive the boat.
To put meaning in one’s life may end in madness,
But life without meaning is the torture
Of restlessness and vague desire—
It is a boat longing for the sea and yet afraid.

As they have so many times in my life, these words came back as I read this week of yet another academic group calling for infanticide’s new euphemism: Post-birth abortion.

Read the article here. This also follows an article in the Journal of Medical Ethics two years ago, giving cold rationalization for murdering newborns. And that was atop Princeton’s Peter Singer who has advocated this for years.

Every argument is being offered around the world for infanticide in the case of terminal conditions, and even genetic conditions such as Down syndrome. The arguments are the same “quality of life” arguments used to justify abortion. Realizing that infanticide could never sell, as such, the proponents now claim that a newborn is closer developmentally to a fetus than to an adult. What the proponents gloss over is the human identity of the one they seek to murder in cold blood.

Yes, being handed devastating diagnoses for one’s child is enough to make one’s blood run cold. When Regina and I were told that Joseph might well need a group home one day, my faith in myself as a father was put to the test. It was shattering to hear one of the world’s leading authorities say these words. In that moment I had only two things left to me:

The certain knowledge of Regina’s steadfastness and of God’s steadfast providence.

Today that boy stands ready to become an Eagle Scout in two months at the age of fifteen. I don’t think I could have seen that or believed it possible eleven years ago, and therein lies the great trap for so many parents facing the eventual counsel to engage in, “what’s best for the child,” as infanticide takes hold. It is nothing less than love being inverted.

A little more than a century before Masters penned his poem, Thomas Jefferson wrote a letter to his daughter Patsy, where he advised,

Every human being must be viewed according to what it is good for. For not one of us, no, not one, is perfect. And were we to love none who had imperfection, this world would be a desert for our love.

Jefferson grasped that our love only takes root in the soil of human imperfection in others. Far from merely affirming what we find desirable and admirable in others, love complements and completes others. It is a balm for their wounds and a fortress for their weaknesses and fears. It is safe refuge, a place to safely grow.

Jefferson grasped that love, true love, is sacrificial in nature and has nothing to offer humans who might be perfect. Imagine a world that was a desert for our love.

That is not so much the world that might be, but the world as it is in large swaths of what was once western civilization. The intolerance of imperfection, the disillusionment of our life’s goals being suddenly derailed by the acute and chronic needs of a child or elderly parent, all run hard against our thirst for meaning, but fear of sacrifice and its cost. We are doing something wrong as a people, as a Church, for such fear to rule. In a season of hope, we need to search within for some hard answers to the question of how it is that we have come to this, and what we must do to offer hope and vision to those stumbling around in the darkness.

Could it be that alienation from God precipitates the alienation of love, true love from people’s lives? Is that it?

Masters grasped it, I think. I would only add that the meaning of which Masters speaks is wrought by Jefferson’s love:

To put meaning in one’s life may end in madness,
But life without meaning is the torture
Of restlessness and vague desire—
It is a boat longing for the sea and yet afraid.

I think that somewhere in there is the way out for a civilization in free-fall.