Trending Now
You are at:Home»Featured»Entertainment at the Expense of Children
By Christopher White on April 28, 2014 Featured, Reproductive Technology, The Homosexual Agenda 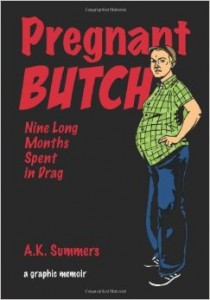 A new graphic novel, Pregnant Butch: Nine Long Months Spent in Drag, chronicles the pregnancy journey of a lesbian named Teek and her partner, Vee. While the novel is fiction, it’s based on the author’s own experience parenting her son.

It’s a humorous take on the subject of lesbian pregnancies with one reviewer noting “This comic’s strength is its ability not to devolve into the oversentimentality or overseriousness that marks many pregnancy narratives.” For a teaser, you can view an excerpt from the book that the New York Times recently published here.

Despite praise for being groundbreaking and bold in its exploration of modern parenting, once again we’re offered another example of entertainment at the expense of children created through sperm donation.

While Pregnant Butch is a tale of fiction representing the increasingly daring and often destructive form of family creation through reproductive technologies, it’s a reality that we’re getting to know all too well.

Critics may praise its author for her comic genius, but when her child grows up and learns that his conception became the basis for mass entertainment, we’ll see who is laughing then.

Reprinted with permission from The Center for Bioethics and Culture.