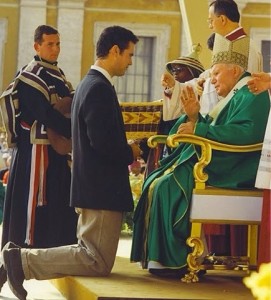 In October of the Jubilee Year 2000, a World Mission Congress was held in Rome. Hundreds of missionaries and mission educators from around the world gathered in the Eternal City to celebrate the fundamental call of all Christians: to be the soul in the body of the world. To breathe a spirit of peace and humanity in an age increasingly foreign to kindness and selfless love. I was part of a delegation of over 20 young adults from across the USA.

The Congress closed on World Mission Sunday, October 22, with a Jubilee Mass celebrated by Pope John Paul II. As a remembrance of those first missionaries, the Twelve Apostles, twelve men and women were chosen to receive a new commission for a New Evangelization.

We received a simple cross, woven by missionary sisters, from Pope John Paul II himself, and he commissioned us “to bring Jesus back to your country.” I was given the amazing and unexpected grace to be selected as one of those twelve souls, representing the United States of America!

That moment of kneeling before the Vicar of Christ on earth, before a man so many already considered a saint, an intellectual giant and a philosopher whose insights would be talked about and explored centuries from now, will never fade from my memory. There at the feet of St. John Paul II, the prayers and songs of over 80,000 people behind us in St. Peter’s Square billowed up and over us, like a surging and powerful tide of convicted joy.

Since that day I’ve tried to make it my goal to simply “bring Jesus back” to the world; one word, one step, one moment at a time, but I’m realizing it’s more “letting Him be” than it is me doing anything.

This New Evangelization is more about seeing Him everywhere than it is about saying things everywhere. He lives. He moves. And in us He shares His being, so generously. We simply need to receive that truth.

May the same fire that fueled John Paul also fill our hearts! And may he continue to pray for us! And inspire us to take up our own crosses, our own challenges, and not be afraid!