Trending Now
You are at:Home»The Catholic Family»Education»Etiquette for the Non-praying
By Mary Kochan on August 24, 2016 Education, Featured 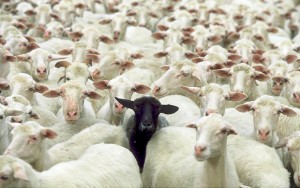 School has begun and it is only a matter of time before what has become the perennially vexing problem of school prayer makes the headlines once again. From the Left, we can expect cautions against the “dangerous” practice of student-led prayer because of “how susceptible schoolchildren are to peer pressure”.

My own upbringing was as a strict Jehovah’s Witness. My religion forbid participation in the exercises that commenced my day throughout elementary school: the recitation of the Pledge of Allegiance, singing of the national anthem, and a brief prayer.

The Watchtower Society’s Talmudic instructions were very clear to all JW children, inculcated both by repetition and actual rehearsals. If we were caught standing when the Pledge of Allegiance or the playing of the national anthem began, we were to remain standing in a normal relaxed posture. We were to do nothing to show disrespect for the actions of the people around us, neither were we permitted any action which could be interpreted as participation. We were not to stand “at attention” nor put our right hand anywhere near our heart. If we were already seated when these exercises commenced, we were to remain seated because standing at that moment could be misconstrued as an act of reverence for the flag or the anthem.

Similar instructions were given regarding our conduct during the prayer. We were to be silent, respectful of the fact that the others were praying, yet not doing anything — such as bowing our heads, folding our hands or saying “Amen” — that could give the impression that we assented to the prayer in any way. We were told, and it is indeed true, that we worshiped a different God than the God addressed as “Our Father” by our largely Christian classmates.

Since I grew up in South Florida, there was a significant population of Jewish children in my school. I do not recall there being any particular problem with Jewish children crumbling under “peer pressure”. For me and other JW children, such peer pressure as there was consisted merely in a few stares and a question or two the first few days of school. At first my helpful classmates would simply think that I was momentarily distracted and had missed the bugle call. “Hey, stand up! They’re doing the pledge”, they would whisper urgently. And I would quickly shoot back, “I can’t. It’s against my religion.” After a time or two I did not have to say anything; if a new student attempted to correct me, another would quickly offer, “Leave her alone. It’s against her religion”. The school served fish on Friday on account of the Catholics; the teachers scheduled tests and assignments to make allowances for the Jewish Holy Days; and they let the Jehovah’s Witness kids sit during the Pledge of Allegiance.

Was I ever teased? Sure. Every childhood has its moments of torture. But rarely was I ever teased about my religion or about nonparticipation in the community’s ordinary rites. And oh! how I would have preferred being teased over that (persecuted!) rather than over some personal feature. Teachers were always appraised in writing ahead of time that there were some things in which I would not be participating. The list was long for every holiday was verboten behind the walls of the Watchtower and the teachers had to make sure that I would be in the library whenever there was cake or candy in the classroom. I have no doubt that if there had been any incidents targeting me for religious reasons they would have come to my defense.

I was the “beneficiary” of the Supreme Court decision in Barnette v. West Virginia State Board of Education (1943), which exempted Jehovah’s Witness children from being required to salute the flag. I was free to practice my religion. But my classmates were too and so I kept to myself my well-taught JW contempt for the pagan, worldly “idolatry” going on around me. Some of my classmates and teachers may equally have held secret contempt for my religion, but we were no hindrance to one another. The Supreme Court decision did not protect me from any “peer pressure” that may have been present due to the embarrassment of being different (the constant horror of the young), any more than it protected my fellow students from my forthright, well-practiced, proof-text-buttressed defense of Watchtower doctrines during lunchtime or on the playground.

Today I am Catholic. I have long since come to regard the Jehovah’s Witnesses both as the most venomous modern purveyors of the noxious Arian heresy and as a totalitarian cult. Childhood within that group is barren: Team sports and clubs are forbidden; there are no celebrations of birthdays and holidays; non-JW friends are disallowed and Armageddon looms darkly, ever on the horizon. The time spent going to meetings and selling magazines door to door comes at the cost of developing skills at sports or dancing or art or music. But the JWs do one thing with their children that is exemplary: They teach them the simple formulas of etiquette demanded of an abstaining minority — neither compromising their own practices, nor interfering with the rights of the majority.