Trending Now
You are at:Home»Featured»Europe’s Not-So-Revolutionary Youth
By Samuel Gregg on June 29, 2011 Featured, The Economy 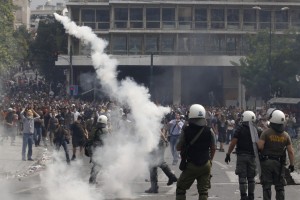 As the European Union’s financial crisis continues to unfold across the old continent, many young Europeans are belatedly realizing their economic future looks rather bleak. Unfortunately, the tens of thousands of young Europeans who have taken to the streets of cities such as Lisbon, Madrid, Barcelona, Athens, and Paris in recent months to express their disgust aren’t really interested in radical change. Instead, they tend to be that most conventional of creatures — diehard backers of an unsustainable status quo.

Called the “indignant ones,” Europe’s angry young men and women derive their name from a best-selling pamphlet, Indignez-vous! (2010), written by, paradoxically-enough, someone at the opposite end of the age-spectrum: a 93-year-old former French Resistance member named Stéphane Hessel.

Everything you need to know about the pamphlet’s contents is revealed by the fact that its first English translation was published in March this year by the Nation — the self-identified flagship of America’s left. Full of tirades against the “current international dictatorship of the financial markets” and exhortations to “get angry,”; Hessel’s text also denounces reforms of those very same welfare states which have helped drive much of Europe to the brink of financial catastrophe.

For good historical reasons, Europe’s political classes get nervous whenever people, young or old, take to the streets. After all, mass protests against the status quo in 1789, 1848, 1918, and 1968 helped facilitate significant political upheavals, not to mention looting, violence, and, occasionally, temporary seizures of power by terroristic regimes.

This time, however, things are different. With barely-disguised reluctance, governments across Western Europe are proceeding with relatively minor reforms aimed at reducing the European welfare state’s costs. But les indignés are protesting not only the pain of change — they also clearly resent the changes themselves.

Of course there’s an anarchist fringe to these youth protests — the ski-masked individuals who routinely join any demonstration to exult in the joy of physical violence against police and random destruction of private property. But by and large, the indignant ones want exactly what their parents and grandparents regard as their birthright: not-too-exacting jobs-for-life, free health-care, state-guaranteed minimal-incomes, six weeks paid annual vacation, early-retirement, and generous state-provided pensions.

In other words, they want Social Europe. Los indignados don’t, however, apparently comprehend just how much this economic system has contributed to their present plight.

Take labor-market regulation. For decades, many Western European governments have — in the name of solidarity — made it very difficult for employers to fire anyone. Consequently, European businesses have to think twice about hiring anyone because they know that once they have done so, it’s very difficult to remove them, even for gross incompetency.

Many young Europeans consequently find themselves unable to find jobs or condemned to a half-life of cobbling together part-time short-term contracts, much of which involves work for which they are highly over-qualified. The fact that their straightened financial circumstances often makes it necessary to live with their parents (who, presumably, are often among those benefiting from almost-impossible-to-fire arrangements) doesn’t make their situation any easier.

But do we hear the indignant ones clamoring for labor market reform? Not at all. They’re protesting against such changes in Portugal, France, Spain, and Greece. In that sense, they’re no different from those French students whose street protests helped dilute an already rather-mild liberalization of France’s labor laws back in 2006.

Many young Europeans are also remarkably unaware that Europe’s demographic trends are further tilting the scales against them. The below-replacement birth-rates prevailing in almost every European nation will result in the proportion of active workers to retirees across the EU shifting over the next twenty-five years from a 2:1 ratio to a 1:1 ratio.

This makes it unlikely that even present reforms, such as raising retirement ages, can forestall an eventual implosion of Europe’s welfare states — a process that, at present rates, will be underway long before les indignés come even close to receiving their first state-pension check.

Nor do los indignados appear to realize that any chance they might have to force through liberalizing economic reforms via democratic means is weakening by the day.

The same demographic developments that will severely compromise their financial prospects are also reducing young Europeans to the status of a minority in the world’s most rapidly aging continent. This progressively diminishes their ability to out-vote Europe’s millions-strong (and growing) gerontocracy who, AARP-like, appear quietly content to live off their children’s future.

None of this means that young Europeans shouldn’t be angry about the continent’s present financial mess. They have every right to be fed up with their perilous economic situation. Europe’s political classes fully merit their contempt.

But as France’s Anglophile Prime Minister François Fillon pointed out to Monsieur Hessel — and thus indirectly Western Europe’s irate young status quo-narians — “indignation for indignation’s sake is not a way of thinking.”

If the threat facing China is that it may get old before it gets rich, one of Europe’s problems is that many of those who constitute its future want to live in the immediate past. Their imaginations remain trapped in Social Europe’s fantasy of more-or-less permanent economic security and a vision of life that discourages personal initiative and risk-taking: in other words, things that help make human life distinctly human.

The longer Europe’s indignados take to wake up to these realities, the more prolonged will be their present nightmare.

This commentary originally appeared in the American Spectator.