Trending Now
You are at:Home»Featured»Homily at the Mass for the Feast of Sts. Peter and Paul
By Pope Benedict XVI on June 29, 2011 Featured, The Shepherd's Voice, Vocations 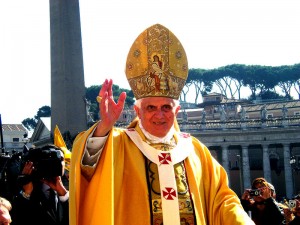 Sixty years on from the day of my priestly ordination, I hear once again deep within me these words of Jesus that were addressed to us new priests at the end of the ordination ceremony by the Archbishop, Cardinal Faulhaber, in his slightly frail yet firm voice. According to the liturgical practice of that time, these words conferred on the newly-ordained priests the authority to forgive sins. “No longer servants, but friends”: at that moment I knew deep down that these words were no mere formality, nor were they simply a quotation from Scripture.

I knew that, at that moment, the Lord himself was speaking to me in a very personal way.

But what was taking place now was something greater still. He calls me his friend.

He grants me the almost frightening faculty to do what only he, the Son of God, can legitimately say and do: I forgive you your sins.

He wants me – with his authority – to be able to speak, in his name (“I” forgive), words that are not merely words, but an action, changing something at the deepest level of being. I know that behind these words lies his suffering for us and on account of us.

He confides in me: “No longer servants, but friends”.

He entrusts to me the words of consecration in the Eucharist. He trusts me to proclaim his word, to explain it aright and to bring it to the people of today.

He entrusts himself to me. “You are no longer servants, but friends”: these words bring great inner joy, but at the same time, they are so awe-inspiring that one can feel daunted as the decades go by amid so many experiences of one’s own frailty and his inexhaustible goodness.

“No longer servants, but friends”: this saying contains within itself the entire programme of a priestly life.

What is friendship? Idem velle, idem nolle – wanting the same things, rejecting the same things: this was how it was expressed in antiquity. Friendship is a communion of thinking and willing. The Lord says the same thing to us most insistently: “I know my own and my own know me” (Jn 10:14). The Shepherd calls his own by name (cf. Jn 10:3).

He knows me by name.

I am not just some nameless being in the infinity of the universe.

He knows me personally.

Do I know him?

The friendship that he bestows upon me can only mean that I too try to know him better; that in the Scriptures, in the Sacraments, in prayer, in the communion of saints, in the people who come to me, sent by him, I try to come to know the Lord himself more and more.

Friendship is not just about knowing someone, it is above all a communion of the will.

It means that my will grows into ever greater conformity with his will. For his will is not something external and foreign to me, something to which I more or less willingly submit or else refuse to submit.

No, in friendship, my will grows together with his will, and his will becomes mine: this is how I become truly myself.

Jesus’ words on friendship should be seen in the context of the discourse on the vine. The Lord associates the image of the vine with a commission to the disciples: “I appointed you that you should go out and bear fruit, and that your fruit should abide” (Jn 15:16).

The first commission to the disciples, to his friends, is that of setting out – appointed to go out -, stepping outside oneself and towards others. Here we hear an echo of the words of the risen Lord to his disciples at the end of Matthew’s Gospel: “Go therefore and make disciples of all nations …” (cf. Mt 28:19f.)

The Lord challenges us to move beyond the boundaries of our own world and to bring the Gospel to the world of others, so that it pervades everything and hence the world is opened up for God’s kingdom.

We are reminded that even God stepped outside himself, he set his glory aside in order to seek us, in order to bring us his light and his love. We want to follow the God who sets out in this way, we want to move beyond the inertia of self-centredness, so that he himself can enter our world.

After the reference to setting out, Jesus continues: bear fruit, fruit that abides.

What fruit does he expect from us?

What is this fruit that abides?

Now, the fruit of the vine is the grape, and it is from the grape that wine is made. Let us reflect for a moment on this image.

For good grapes to ripen, sun is needed, but so too is rain, by day and by night.

For noble wine to mature, the grapes need to be pressed, patience is needed while the juice ferments, watchful care is needed to assist the processes of maturation.

Noble wine is marked not only by sweetness, but by rich and subtle flavours, the manifold aroma that develops during the processes of maturation and fermentation.

Is this not already an image of human life, and especially of our lives as priests?

We need both sun and rain, festivity and adversity, times of purification and testing, as well as times of joyful journeying with the Gospel. In hindsight we can thank God for both: for the challenges and the joys, for the dark times and the glad times. In both, we can recognize the constant presence of his love, which unfailingly supports and sustains us.

Yet now we must ask: what sort of fruit does the Lord expect from us?

Wine is an image of love: this is the true fruit that abides, the fruit that God wants from us. But let us not forget that in the Old Testament the wine expected from noble grapes is above all an image of justice, which arises from a life lived in accordance with God’s law. And this is not to be dismissed as an Old Testament view that has been surpassed – no, it still remains true.

The true content of the Law, its summa, is love for God and for one’s neighbour.

But this twofold love is not simply saccharine. It bears within itself the precious cargo of patience, humility, and growth in the conforming of our will to God’s will, to the will of Jesus Christ, our friend.

Only in this way, as the whole of our being takes on the qualities of truth and righteousness, is love also true, only thus is it ripe fruit.

Its inner demand – faithfulness to Christ and to his Church – seeks a fulfilment that always includes suffering. This is the way that true joy grows. At a deep level, the essence of love, the essence of genuine fruit, coincides with the idea of setting out, going towards: it means self-abandonment, self-giving, it bears within itself the sign of the cross.

Gregory the Great once said in this regard: if you are striving for God, take care not to go to him by yourselves alone – a saying that we priests need to keep before us every day (H Ev 1:6:6 PL 76, 1097f.).

Dear friends, perhaps I have dwelt for too long on my inner recollections of sixty years of priestly ministry. Now it is time to turn our attention to the particular task that is to be performed today.

On the feast of Saints Peter and Paul my most cordial greeting goes first of all to the Ecumenical Patriarch Bartholomaios I and to the Delegation he has sent, to whom I express sincere thanks for their most welcome visit on the happy occasion of this feast of the holy Apostles who are Rome’s patrons. I also greet the Cardinals, my brother bishops, the ambassadors and civil authorities as well as the priests, the confrères of my first Mass, religious and lay faithful. I thank all of you for your presence and your prayers.

The metropolitan archbishops appointed since the feast of Saints Peter and Paul last year are now going to receive the pallium. What does this mean?

It may remind us in the first instance of Christ’s easy yoke that is laid upon us (cf. Mt 11:29f.). Christ’s yoke is identical with his friendship. It is a yoke of friendship and therefore “a sweet yoke”, but as such it is also a demanding yoke, one that forms us. It is the yoke of his will, which is a will of truth and love. For us, then, it is first and foremost the yoke of leading others to friendship with Christ and being available to others, caring for them as shepherds.

This brings us to a further meaning of the pallium: it is woven from the wool of lambs blessed on the feast of Saint Agnes. Thus it reminds us of the Shepherd who himself became a lamb, out of love for us.

It reminds us of Christ, who set out through the mountains and the deserts, in which his lamb, humanity, had strayed. It reminds us of him who took the lamb – humanity – me – upon his shoulders, in order to carry me home. It thus reminds us that we too, as shepherds in his service, are to carry others with us, taking them as it were upon our shoulders and bringing them to Christ.

It reminds us that we are called to be shepherds of his flock, which always remains his and does not become ours.

Finally the pallium also means quite concretely the communion of the shepherds of the Church with Peter and with his successors – it means that we must be shepherds for unity and in unity, and that it is only in the unity represented by Peter that we truly lead people to Christ.

Sixty years of priestly ministry – dear friends, perhaps I have spoken for too long about this. But I felt prompted at this moment to look back upon the things that have left their mark on the last six decades.

I felt prompted to address to you, to all priests and bishops and to the faithful of the Church, a word of hope and encouragement; a word that has matured in long experience of how good the Lord is.

Above all, though, it is a time of thanksgiving: thanks to the Lord for the friendship that he has bestowed upon me and that he wishes to bestow upon us all. Thanks to the people who have formed and accompanied me.

And all this includes the prayer that the Lord will one day welcome us in his goodness and invite us to contemplate his joy. Amen.