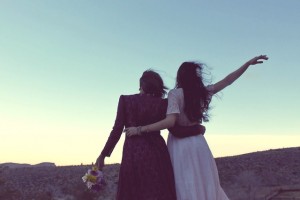 I crawled into the bed with Kristi and we lay together all afternoon talking and laughing. We talked about everything under the sun: our childhoods, our hopes and dreams, our disappointments, homeschooling, our faith, our husbands, our children, and her cancer. It’s been a year ago already and I can remember everything about that day.

I felt awkward at first climbing into the bed with my dear friend. It’s not what most adult friends do. We weren’t childhood friends so we didn’t grow up having slumber parties where sat huddled in a bed together talking about which boys we thought were cute at school. But, she insisted I sit in the bed and talk as I stayed with her for the day before she left for a few days for her chemo treatments.

While we were not childhood friends, we had a very special relationship. We became friends years ago as Kristi was entering the Catholic Church and I was helping in the RCIA classes. That year we became fast friends, and as she and her husband stood before the Church and became new Catholics, she asked that I hold their newborn son John Paul in my arms. I was so honored! I would be honored again to hold him as his Godmother when he was baptized shortly thereafter. She would later become my son Jake’s Godmother as well.

Our friendship grew as we found we had many things common. We both homeschooled our kids and we were both open to life. We shared a love of our Catholic faith and could talk for hours about the beauty and responsibility that being a Catholic Christian brought to our lives. We shared secret hopes and dreams with one another. We shared the ups and downs of raising children and she was one of the few I knew I could trust with the heartaches or disappointments I might have been going through. She was also there for me as I faced many losses. It was my privilege to be there when she sadly faced her own. Our hearts cried together and together we healed.

We sat for hours in her bed just talking. The awkwardness that I felt when I first climbed into the bed quickly faded away as I focused on sharing time with my friend. Cancer was ravaging her body and yet she remained hopeful and joyful. We laughed and smiled and I came away that day feeling blessed that God had brought this woman into my life so many years ago.

Many months later I would climb into the bed again with Kristi. This time it was not her own bed but one at her parents’ home as they were helping to take care of her while her husband worked two hours away. The room was small and Kristi looked tiny in the big bed that filled the room. She was wearing a pretty pink nightgown. She had previously lost all her hair with her chemo treatments but it was beginning to grow back. However, instead of her thick dark hair, beautiful silver curls had grown in its place.

She was so tired. She began to fall asleep. I watched her as her eyes finally closed and she fell into a peaceful sleep. For the moment, she didn’t feel any pain. She was simply beautiful. I wanted to take a picture of her as she slept so I could remember her this way, but I didn’t want to be disrespectful. Instead, I memorized the lines of her face, the curling of her hair, the way her eyelashes intertwined with one another, and the way her skin glowed as the sun shone on her through the lone window. I held her hand and I prayed.

It wouldn’t be long until she was in hospice care. She would eventually be transferred to a hospice facility where they could take care of her in her final days. As I sat beside her there, Russ and I would talk about just how amazing she was. Her heart, her strength, her gentle nature, and her faith were something to aspire to.

I didn’t want to leave her side. I would feel guilty for sitting beside her so long. I worried that I was taking from Russ’s time with her and yet he encouraged me to be with her as much as I needed to. It was comforting to hold her hand even when she could no longer speak to me. Still, she knew we were there and she did her best to move her fingers and her lips when I prayed the rosary with her.

I was blessed to be visiting her the day she died. I was able to be with her in those very last hours and I am so grateful for that gift. I lost one of the best friends I have ever known the day Kristi died. My heart felt shattered. It was hard to wrap my mind around the fact that she was no longer here but instead headed to our Father. While I was overjoyed that her suffering and pain were gone and that she was healed, I was devastated for her family and for myself. The finality of it all was just too much.

However, even in my pain I could see the gift that Kristi gave to all of us.

We hear so much about the right to die and how advocates for this movement want to allow people the right to kill themselves or be euthanized when they are diagnosed with a terminal illness or have other reasons for not wanting to live. Kristi’s journey reinforced to me why this is wrong and it showed me the beauty that comes with living out our lives until the very end.

Kristi taught us that even in the face of adversity we must continue to fight. We can’t give up! She had stage 4 cancer and yet she fought until the very last day. She showed her children, and all of us, what strength and fortitude really meant. They can always look to her example when they feel like giving up.

She reminded us that we shouldn’t take the small things for granted. I remember when she was at the hospital and wanting to go home; she told me that she longed to stand at her kitchen sink and do the dishes. She smiled a sad smile and said, “I miss the little things. I miss the ordinary things.” She reminded us all that there is comfort in doing the ordinary and that each task we are set to do is an important one, so we should put our heart into everything we do.

Kristi showed us how to suffer gracefully. She was in so much pain for such a long time, but especially in those last months. Still, she smiled through it all. She never complained and was always so thankful for anything anyone did for her. She viewed suffering as a way to draw closer to our Lord. She placed herself in His hands and asked that He would purify her through her suffering. She showed us each that we can take our own sufferings and bear them with quiet strength and love.

Kristi also gave us the gift of taking care of her when her body began to fail her. It takes great humility to allow others the opportunity to see you and care for you at your most vulnerable and weakest points. Kristi gave many of us this gift. We knew we were being blessed to get to participate in her care and comfort, but we could never imagine to what extent that would be. Oh the blessings of bringing her Communion or of helping her eat or drink! My heart rejoices that I could do this for her in her last days.

My dear friend showed each of us what it means to truly walk with the Lord. She modeled her faith while she was alive and as she was dying. She prayed and trusted in God’s plan for her at all times. She spoke of His goodness up to the very last time she could speak. His name was on her lips and she praised Him even in her weakness. Her witness to faith touched all our hearts.

There are some who may say that there is no dignity in a death that strips you of the life you had or that causes you so much suffering. Kristi showed us differently. She longed to live the life God blessed her with up until her very last breath. She taught us all that even in suffering there can be hope and peace.

October is Respect Life month. We often think of only babies during this time as the month also coincides with Pregnancy and Infant Loss day. However, we have to remember that all life needs to be respected from the moment of conception all the way to the moment of natural death. Kristi’s life and death was dignified, graceful, and beautiful even amid the suffering she encountered. It was not only through her life, but also her death, that we learned so much.

I am forever thankful that Kristi chose to allow us each to walk with her on her journey home. Her selflessness allowed us each to experience God’s love in a new way. I can never thank her enough for that gift.