Trending Now
You are at:Home»Featured»Movie Review: Hyena Road
By Sr. Helena Burns, fsp on October 28, 2015 Featured, On TV and Movies 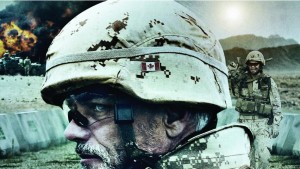 Hyena Road is the latest film about the war-with-no-end-in-sight: Afghanistan. Canadian writer-director-actor, Paul Gross, delivers what is now a standard, sand-infiltrated, camo-dappled screen adventure in the nouveau tradition of Jarhead, Hurt Locker and American Sniper. Hyena Road looks and feels pretty much the same as these movies, except that this tale is exclusively about Canadian troops and one of their slices of the battle–a lethal supply route in Afghanistan’s notoriously inhospitable terrain, riddled with IED’s and “insurgents.”

My main question about this film was: “Is it a Canadian film?” And if so, what makes it Canadian or not? Canadians are known for their non-bellicosity. It’s not that they don’t have the stomach or skills for war. They don’t have the heart for war–which isn’t a bad thing.

Having lived in Canada for over a decade, I can testify that Canadians are a truly peaceful and genteel people. But Canada is an ally of the U.S. and part of the free world that opposes terrorism and is willing to combat it with force. So why are “they” making this ostensibly glam war film?

I haven’t seen or read any interviews with Paul Gross, but I’m going to go out on a limb here and say that it may be from motives of national pride to honor (honour) the Canadians who fought and those who lost their lives in this maddening desert morass.

One Canadian film critic went so far as to call Hyena Road “jingoism,” and there was a bit of that. However, patriotism is coupled with a somewhat cheesy voice over beginning, and ending the film with Alexander the Great’s deferent words about this indomitable land and people.

The film is trying to make sense of it all by showing us the big, big picture while zeroing in on the smallest human details of this particular war–which, in reality, is “many different wars.” Unlike American films about the Gulf Wars, the enemy is not as demonized in black and white–rather the point seems to be that it’s individuals who choose to be and do evil during war time or any time.

War quickly becomes personal and deeply conflicted for the idealistic and/or duty-driven North Americans. As with many war-weary populations, Afghans have learned to switch allegiances to suit their own purposes, survive and thrive.

Nothing is clear-cut and there are layers of purposes and strategies that Pete (Paul Gross)–the PR “heart and minds” guy–doesn’t even share with his company until they’re in the thick of it.

Perhaps the greatest dilemma posed in the film (a dilemma in all wars) is “the greater good.” (The distinctly American phrase “collateral damage” is not used.)

When children are abused and become pawns, it’s too much for the men to “do nothing” as they are ordered. They righteously and naively assume that war is about doing heroic and worthy things like protecting children. That’s why they signed up. That’s what they’re here for. But they forget it’s not their war and that they too are pawns of far bigger and more powerful forces and entities.

When it comes to light that Pete is OK with this arrangement, there was an opportunity to really cut open the dark underbelly of the amoral soul of war. Instead the filmmakers made nice.

The acting is a bit bland (sorry, Canadians!) and lacks any kind of star power, juice or chemistry. The swaggering, scenery-chewing Paul Gross brings some, but he never quite nails his role. I felt that he was working hard at drumming it up and going through the motions.

The firefights are quite tense and well-done, except that no Canadian soldier ever gets hit (for most of the movie), even though they are impossibly exposed. The cinematography is on point except for a few strange, experimental (the experiment fails) camera angles and pans here and there (in non-combat scenes). The soundtrack is lush, exotic, operatic and conjures throbbing war drums.

Exposition? Too much showing and telling at the same time. And lots and lots of telling by Pete who frequently goes on disclosure binges that feel like…disclosure binges (helpful as they are). The story actually begins with no plot or stakes and proceeds rather episodically. But maybe that was on purpose, to show the subtle futility of war’s Sisyphean tasks.

Hyena Road had the potential to be a much greater film. It has some powerful set-ups and tackles some powerful human dramas. But it needed to “go there.” It needed to go all the way and not back off, back down.

The deeper question of “why does the USA/Canada go to war?” has become even more problematic than ever in an “anything goes” world. Are highly-trained, highly-disciplined, self-sacrificing soldiers fighting to preserve the right of people back home to do absolutely anything they want? Are they fighting for wanton license back home and using the of the rule of law to flatten laws, create a climate of lawlessness or create tyrannical laws based on pure subjectivity? When there’s no longer a common goal and ideals, no shared ethics, no agreement about what human dignity even is–how do you fight to uphold it?

One of the last sacrosanct taboos is to harm a child. Yet abortion is legal and there are those pushing for the “rights” of a child to be free from the upbringing, mores, morality and religion of their parents (which, of course, is swiftly replaced by those of the State). There are those pushing for the “right” of a child to be “sexually active” (including with adults) and to do away with the “discriminatory” concept of childhood altogether. Perhaps these incongruous realities are subconsciously as crazy-making to a soldier’s psyche as an IED.

In the end, I think this is a Canadian film. Simply, perhaps, because Canadians know it’s not all about them.