Trending Now
You are at:Home»Featured»Fanning the Flames of Left-wing Violence
By J. Matt Barber on August 20, 2012 Featured, The Homosexual Agenda, The Social Order 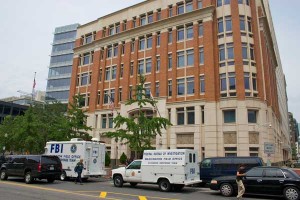 To borrow from President Obama’s Black Nationalist mentor, Jeremiah Wright, the Southern Poverty Law Center’s hate-baiting chickens “have come home to roost.” The hard-left group has become everything it presumes to expose.

The only thing standing between Corkins and mass murder was FRC facilities manager and security specialist Leo Johnson. As Corkins shouted disapproval for FRC’s “politics,” he shot Johnson who, despite a severely wounded arm, managed to tackle Corkins and disarm him (of course, this is all impossible as it’s illegal in Washington, D.C., to carry a concealed weapon).

Upon hearing of Leo’s selfless act of heroism, I was reminded of John 15:13: “Greater love has no one than this, that he lay down his life for his friends.”

But according to the SPLC, Leo’s heart is, instead, full of hate. In fact, everyone at FRC is hateful. After all, in 2010 the SPLC, with much fanfare, “officially certified” FRC as a “hate group” for its orthodox Christian positions on marriage and family.

Alongside violence-charged photos of actual hate groups like the Aryan Brotherhood and the KKK, the SPLC lists on its website the decidedly mainstream and always peaceful FRC.

It’s a clever strategy, dishonest and reprehensible though it may be. By juxtaposing FRC and other Christian organizations with violent extremist groups, SPLC has engaged in intellectual sloth at its worst (the organization has repeatedly declined to debate FRC President Tony Perkins over its “hate group” smear).

Rather than debating – on the merits – mainstream Christian groups with which it has ideological disagreement, SPLC has chosen, instead, the coward’s way out: demonization and marginalization through false guilt by association.

It’s a scheme not only slimy, but extremely dangerous.

If ever there were a time I’d prefer not to have been right, now is that time. Back in November 2011, I essentially predicted both the FRC shooting and the SPLC’s undeniable complicity therein.

With a column headlined, “Liberal violence rising,” I wrote, “The SPLC’s dangerous and irresponsible (‘hate group’) disinformation campaign can embolden and give license to like-minded, though less stable, left-wing extremists, creating a climate of true hate. Such a climate is ripe for violence.” (If anyone deserves to be taken out – rationalizes the unbalanced SPLC dupe – its members of this or that evil “hate group” whom, as he’s been repeatedly told, mean him great harm.)

That was before the fact. After the fact – one day after the shooting – Tony Perkins addressed exactly that which I forecast:

“Let me be clear that Floyd Corkins was responsible for firing the shot yesterday,” he told Washington reporters. “But Corkins was given a license to shoot an unarmed man by organizations like the Southern Poverty Law Center that have been reckless in labeling organizations hate groups because they disagree with them on public policy.”

The SPLC “should be held accountable for their reckless use of terminology that is leading to the intimidation and what the FBI here has categorized as an act of domestic terrorism.”

Regrettably, Mr. Perkins finds himself in a uniquely credible position to make this charge.

Still, although there remains a vast ideological divide between the SPLC and the tens of millions of Christian Americans represented by the Family Research Council, the Southern Poverty Law Center now finds itself with a brief window of opportunity to both do the right thing and rehabilitate its badly damaged reputation.

To the SPLC, I say this: Your cynical efforts to dehumanize Christians and equate biblical truth to “hate” are working better than I think even you expected. It’s now within your power to right a horrible wrong and restore a sense of peace and security to the rattled folks at FRC. What a gift that would be.

I appeal to your sense of goodwill. This is not a game. Lives are at stake. I know you have good employees (I’ve met some) who believe they’re doing the right thing; so, please, validate that belief. It’s time to remove your metaphorical “hate group” Star of David from mainstream Christian organizations before another of your ideological allies spills blood.

And to homosexual activists and other liberal groups, I say this: Rise above the fray. Let’s come together. Here is something on which even we can agree. Publicly encourage SPLC to lift this veil of fear.

Media, you, too, are on notice. Remember Wednesday’s shooting next time you even think about repeating SPLC’s “hate group” brand while addressing the Christians upon whom it’s tattooed. You also have share in the blame.

SPLC, hear me now: If, God forbid, something like this – or even worse – happens in the future and you have yet refused to retract and apologize for your “hate group” propaganda, then your hands will forever be stained with the blood of innocents.

Still, either way, we Christians are commanded to speak the truth of Christ “even unto death.”

“I was there as [Leo] came to from the anesthesia,” said Perkins, “and I told him, ‘Leo, I want you to know you’re a hero.’ And he thought about it for a minute and he said, ‘You know, this hero business is hard work.’”

I’m proud to count them my friends.

You should be, too.