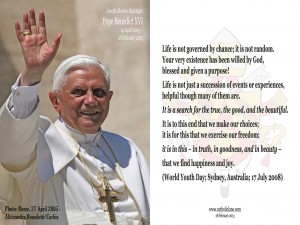 Volume I: From the Baptism in the Jordan to the Transfiguration

Volume II: Holy Week: From the Entrance into Jerusalem to the Resurrection

The Pharisee can boast considerable virtues; he tells God only about himself, and he thinks he is praising God in praising himself. The tax collector knows he has sinned, he knows he cannot boast before God, and he prays in full awareness of his debt to grace. Does this mean, then, that the Pharisee represents ethics and the tax collector represents grace without ethics or even in opposition to ethics? The real point is not the question “ethics — yes or no?” but that there are two ways of relating to God and to oneself. The Pharisee does not really look at God at all, but only at himself; he does not really need God, because he does everything right by himself. He has no real relation to God, who is ultimately superfluous — what he does himself is enough. Man makes himself righteous. The tax collector, by contrast, sees himself in the light of God. He has looked toward God, and in the process his eyes have been opened to see himself. So he knows that he needs God and that he lives by God’s goodness, which he cannot force God to give him and which he cannot procure for himself. He knows that he needs mercy, and so he will learn from God’s mercy to become merciful himself, and thereby to become like God. He draws life from being-in-relation, from receiving all as gift; he will always need the gift of goodness, of forgiveness, but in receiving it he will always learn to pass the gift on to others. The grace for which he prays does not dispense him from ethics. It is what makes him truly capable of doing good in the first place. He needs God, and because he recognizes that, he begins through God’s goodness to become good himself. Ethics is not denied; it is freed from the constraints of moralism and set in the context of a relationship of love — of relationship to God. And that is how it comes truly into its own.