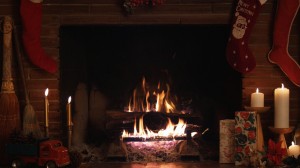 Growing up, Saint Nicholas Day meant three things:  the fireplace, stocking caps, and the biggest pair of shoes you could find.

It started the evening before, when we finished the family rosary.  We always ended our rosary with the ‘blowing of the candle.’  Well, actually it wasn’t a candle, it was a little oil lamp that sat in the middle of the coffee table in our living room.  Every night when it was time to pray we turned the lights off and Dad lit the lamp.  Then, once the rosary was finished, we’d take turns trying to blow out the lamp from wherever we happened to be sitting.  One of my brothers, Mighty Michael of The North Winds Lungs, could blow it out from the piano stool behind Mom’s chair—a good 12 feet away—a truly prodigious feat of flame extinguishment.  His was always The Great Whiff Heard Round the Room.  If he misdirected his stream of air and hit you instead of the lamp, your hair would ruffle in the breeze.

For St. Nick’s Eve, the dousing of the light at the end of the rosary marked the beginning of anticipation.  It was time to hunt up the biggest pair of shoes we could dig out from under the bed and place them in front of the fireplace.  Our “Ranger Boots” were favorites for St. Nick’s.  These were leather hiking boots with long, lace-up ankles—the high tops of the forest, the kind of rugged bog and boulder bounders real wilderness rangers wore—with just the extra capacity that savvy St. Nick’s veterans counted on for a bounteous early morning, hearth-side harvest.

Loafers need not apply.  Deck shoes, clogs, even my beloved gray suede BJ Pro’s that I used for a whole season of cross country, none of them had any business in front of the fireplace on St. Nick’s Eve.  It was no time for fashion.  It was time for performance, as measured by the haul the shoes could yield on the morrow.  Cavern-osity was the criteria.  Sheer, raw hollowness.  You wanted shoes that could hold a ham.  Shoes like Mark wore.  The eldest, and a boy, Mark walked around on some monstrously massive romper-stompers, and he had the Sasquatch dimensioned dog-covers to go with them.

We lined the shoes up according to age in front of the fireplace.  Shoes from the oldest child were at one end, the youngest at the other.  That also meant they went from biggest to smallest.  Mark’s row-boats would be at one end, and Rachel’s cute little mini-munchkin moccasins at the other.  That row of shoes was a sight to see.  You couldn’t actually believe a real person wore some of them, either because they seemed so ridiculously huge or so unbelievably small.  With the heels all even, the toes formed a sweeping curve cascading downward in size.

Next morning, the shoes were another sight to see:  this time because they were stuffed to overflowing with St. Nick’s largess, and right on top of the holiday heap would be the annual hat and gloves combination.  We each got a new stocking cap and a new pair of gloves or mittens every year at St. Nick’s Day, and I loved the hats.  Many years Mom made them herself, and those were always the best.  Even now, many a decade later, I still have a bunch of Mom’s home-made noggin’ warmers from St. Nick’s Day, including a stocking cap with “Frost,” our family name, knit into the bottom inside edge, so that it would show right-side up when you wore the hat and folded the edge up.  I also have a gray hat with red snowflakes that Mom actually made for Mark to wear on his skiing adventures, but which I managed to commandeer somehow amid all the movings-in and movings-out over the years.  The hats Mom made are thick, warm, and full of love.  Mom told me once:  “I always think about the person I’m making the thing for while I work, and I pray for them the whole time, so every stitch, knit, or hook is full of love and prayers.  I hope you can feel that when you snuggle up in it.”  My sister Ruthie and her kids call Grandma’s hand-made blankets “Forever Hugs,” and they are perfect for a cold winter evening, curled up in a chair in front of the fire, with a good picture book and a little person in each arm.

Along with the hats and gloves, there was another surprise we knew would be hidden in our shoes every St. Nick’s morning:  candy cane pens.  Shaped like candy canes with peppermint scented ink, they were an annual favorite—and they actually wrote really well.  And they’d last all year.  Those candy cane pens had to be the highest quality piece of holiday kitsch ever manufactured.

Another annual requirement was the ornaments.  Every year, a new Christmas ornament would be in our shoes on St. Nick’s Day, and Dad would write the year on the ornament.  That was the kind of forethought only a father has.  It’s parents who really live with an eye toward the future.  To look at those ornaments now, to touch them and re-live the memories they bring back, is wonderful—and also potentially frustrating if you couldn’t place those memories in the context of your life.  But thanks to Dad you can turn the ornament over in your hands and see the date on the bottom and say, “Ah yes, 1978, the year of the blizzard, I remember I was just 11 years old and . . .”  It’s amazing the power those tactile connections with our past have, their ability to put us right back in that place and time, with all its sights and sounds and smells.

Then there were the nifty little shoe sized gifts that changed every year but were always a delight.  Things like miniature drawing pads and pencils.  One year I got a pen with a radio in it.  It was a real pen that really wrote, and it had a digital radio built into the handle, plus it came with headphones.  I still have that one too.  There was just something about all those clever little items Mom found to fit in a shoe that appealed to the imagination.

And of course there were the chocolate gold coins, harkening back to St. Nicholas’ gifts to the poor.  The saint worked in secrecy, under the cover of night, leaving anonymous packages of food and money for those in need.  And his secret missions of charity not only helped, they also inspired.  As I’ve heard the story, St. Nick was the Bishop of Smyrna in present day Turkey, and when he saw people in need, he took it upon himself to give them his own food and money.  But it was the way he did it that added the touch of romance which still captivates hearts and inspires wonder today, over a thousand years later.  Because old Saint Nick snuck around at night like a mitered ninja, leaving his gifts anonymously.  No one knew who was doing the good deeds.  His secret saintly style caught on, and soon other townspeople were doing the same thing, leaving their own clandestine gifts for their neighbors in need.

St. Nick’s secret-agent-inspiration was the extra something special that, as Scripture says the Lord does for us, “buoys up the spirit, and brings a sparkle to the eyes.”  Sir 34, 17.  It makes me thing of Mother Teresa’s advice to “do small things with great love.”  It’s the kind of extra investment of the self that can transform mere blankets into Forever Hugs, stitched through and through with love and prayers.  Which is what made those St. Nick’s Days so special—the love and care and imagination that Mom and Dad invested of themselves to fill the soles, and hearts, of eight little souls entrusted into their keeping.  The real joy of the holidays is that gift of self.  I still have the hats and ornaments and radio pens from those St. Nick’s Days, but I think the memories, and the warmth, and the sparkle in the eyes from those snowy mornings, will last even longer.