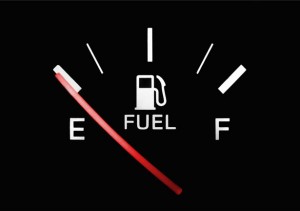 For as long as I can remember, I have been an “11th-hour” guy. Some might call it procrastination. I prefer to say “I thrive under deadline.”

That was a marketable skill for much of my life. Now, it has become an occasionally debilitating burden.

It began, commonly enough, with working on high school term papers the night before they were due. I moved on to cramming for exams in college. Before long, I was working as a sportswriter covering high school, college and professional sports.

Game stories had to be written for the next morning’s paper, often needing me to write extensively in a matter of 30 minutes – or less. But even my feature stories usually were filed on deadline.

More than a dozen years ago, I excelled at it. I thrived writing on deadline. I relished it. The stress actually made me better.

My life is much different now. One of the symptoms of my depression has been poor concentration. Low energy is another. It can be a challenge to get started and a greater challenge to see things through to a timely completion.

The stress no longer is fuel for success. Instead, it paralyzes me.

I have felt crippled by that the last couple of months more than almost any time I can remember. I fell behind in some major tasks at work. I have been trying to write the final chapter of my next book for months and keep putting it off. Through little fault of anyone in particular, a deadline for a free-lance writing assignment got pushed up. So many things accumulated on my to-do list …

On top of that recently came the greatest complication: a building depressive episode. I fell into an old danger zone July 19, a Sunday. I had so, so much to do. Donna was out of town, so I set my alarm for 8 a.m. with the expectation of tackling “the list” – which included cleaning bathroom floors, writing a Catholic newspaper column with an approaching deadline, making a dent in a work project – then going to noon Mass.

With motivation and energy I can’t discern, I soon found myself shaving, brushing my teeth, showering … and at 11:55 a.m., I was kneeling in a pew at St. Cletus Catholic Church thanking God for getting me there.

I noticed that I was more focused in that Mass than I could ever remember. I intensely felt each word of every prayer, received each word from Scripture and absorbed every thought shared by Father Jim Benz in his homily. I felt dedicated to proclaiming the words in the songs and deep into every available moment of silence.

In the midst of that, I pleaded for my late mom to pray for me, to ask Jesus to take my hand and shepherd me through these trials. Imagine my surprise when, during the prayers of petition, the lector asked the congregation to pray for all those intentions held in the quiet of our hearts and “for the special intention of this Mass, Madge Eisenbath,” my mom who passed away May 23.

I had no idea she was that day’s special intention.

After Mass, I filled my car’s nearly empty gas tank. I went to write the date on the check but, as has been the case for a while, I had no idea what the date was. I checked my cell phone: July 19. That’s when it hit me: Sunday marked exactly two months since Mom underwent brain surgery, four days before she died.

Even though it seems much longer ago, it has been only two months. Thoughts about her come back at odd times and in unwelcome ways. Last week, I was driving past the neighborhood in which my parents live and thought, “I haven’t seen Mom lately. I should stop by there.” I have been waking in the middle of the night with flashbacks to the last two hours of her life, when we watched her painfully and uncomfortably struggle for every breath.

I haven’t been able to visit her gravesite yet.

I returned home to tackle some of the things I had neglected in the morning. I wanted to get as much done as possible by 6 p.m., when I planned to leave for the Carmelite Monastery in St. Louis. It was the final night of the annual nine-day novena. I had attended the first one, then missed the following seven. I was determined to be on hand for the night’s music, the rosary, Benediction and the closing Mass.

Time got away from me. I thought it was 5:45, but my daughter Kara corrected me that it actually was 6:45.

“Ah,” I thought to myself, “I’ll just skip it.” Again, with motivation and energy I can’t discern, I soon found myself driving the 20 minutes to the monastery, parking my car and jogging into the chapel.

I arrived about halfway into praying the rosary. All the chapel seats were full and people were standing in the side aisles. I found an open spot next to the wall on the left side, knelt on the stone floor and joined the prayers. Soon, when I stood, I saw in front of me a husband, a wife and their son. I thought I recognized the man but couldn’t imagine why. I looked at him again …

And then it hit me: He was Dr. Michael Chicoine, the amazing and kind neurosurgeon who had removed Mom’s brain tumor exactly two months earlier.

Frankly, I didn’t know what to think. There were hundreds of people in the chapel. And on this day, of all days … standing next to this man, of all men …

The closing Mass was supposed to happen outside and indeed got started, but a thunderstorm forced hundreds of us to cram into the small chapel. Every seat was filled, both side aisles packed with little elbow room and even the center aisle jammed with bodies of the faithful.

It was a beautiful Mass. The homily, to which you can listen by clicking here, was among the most inspiring I ever have heard. I still wondered, though, why the day had happened as it had. My head hurt. The sadness felt so heavy. Part of me wanted to escape.

And yet part of me knew that God had carried me every step of the way.

As people were filing to the front of the chapel to receive the Blessed Eucharist, I noticed two of my most treasured friends, Holly and Jerry. I felt a warm rush surge through my body. I felt comforted. I felt loved.

Holly didn’t see me until, as I approached the priest distributing the Body of Christ, I came up behind her and gave her right shoulder a gentle, friendly squeeze with my left hand. She turned, saw me and gasped silently.

As we were leaving the chapel into the stormy night, she stopped to talk. “At the moment you touched me, I was praying for you,” said Holly, who had no idea I would be attending that night. “And then I turned around and saw you.”

The warmth rushed through my heart again. I felt comforted. I felt loved.

That night, as I reflected on the day, I wondered how God ever got me to those two Masses, how he happened to put me near two special people – one a doctor and one a friend — on a special day when they easily could have gone unnoticed among the hundreds.

And then I read from the New Testament’s Letter to the Hebrews:

“You have approached Mount Zion and the city of the living God, the heavenly Jerusalem, and countless angels in festal gathering, and the assembly of the firstborn enrolled in heaven, and God the judge of all, and the spirits of the just made perfect, and Jesus, the mediator of a new covenant, and the sprinkled blood that speaks more eloquently than that of Abel.” (Hebrews 12:22-24)

The heavenly Jerusalem … Once again, I found undeserved success on deadline.