Trending Now
You are at:Home»Featured»Find Me Somebody to Organ-Rob–Alive or Dead
By Judie Brown on November 18, 2011 Featured, Life Issues & Bioethics 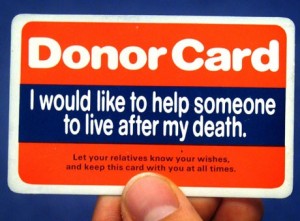 Organ-robbing is something that, in polite company, is referred to as organ donation or organ removal from a “dead” body or some similar term. The idea is to persuade the public that donating a vital organ is a brilliant idea, and since the person making the donation is dead, who’s to care? Well, folks, you should care. You should care a lot, because, many times, in the process of vital organs going to someone in need, the donor’s life is ended.

Consider for a moment the reported perspective of Neil Lazar, director of the medical-surgical intensive care unit at Canada’s Toronto General Hospital, and his collaborators. In an article discussing a speaking engagement involving these men, journalist Michael Cook states, “Let’s scrap the fiction that most patients are dead when their organs are removed and allow doctors to take them from people who are still living. This is the provocative proposal by doctors from Canada and Spain [Lazar and his colleagues] which is creating a stir in bioethics circles.”

Michael Cook further reports that these doctors “argued that it is more important to know whether the patients are comfortable and ‘beyond harm’ than whether they are alive.”

Sadly, this is not a new idea. Ethicist and renowned physician John Shea, M.D. and other critics of organ donation have been sounding the alarm for years. A LifeSiteNews article reports that, “A patient must be genuinely, verifiably dead for it to be ethical to transplant vital organs from that person to others in need of those organs. The only way this can therefore be permissible is not for the medical profession to keep making up new definitions of death that are not really death, as the doctors in today’s article expose, but to work to find a way to harvest vital organs after a person is really dead.”

And that is the point. As long as the “definition of death” is fluid, wrong-thinking bioethics types can do whatever they want to do, and the practices they advocate will be legitimate. In fact, the 16,000 member Christian Medical Association is working feverishly to stop government-endorsed regulation changes on the subject of organ donation after cardiac death (DCD). Its position is eloquently stated in a letter to the president of the Organ Procurement and Transplantation Network (OPTN) in Richmond, Virginia. One of its stated concerns is that the “removal of the requirement of ‘irreversibility’ of cardiopulmonary cessation exposes patients to potential exploitation.” The letter further states that “CMA is concerned that relaxing the definition of death would considerably increase the risk that procedures to remove vital organs would be performed on some patients lacking unambiguous signs that death has occurred. CMA is also concerned about the impact that publicized abuses of the new policy could have on the public’s trust in transplant medicine and their willingness to volunteer as future organ donors.”

Yes, you read this correctly. The Obama administration supports this new definition of death, even though as CMA points out, such a change is “antithetical to the ethical practice of medicine.” But as Bob Unruh reported, “The proposal could move the federal government closer into alignment with what has been proposed by longtime Barack Obama adviser Cass Sunstein. Obama’s ‘regulatory czar’ was revealed in 2009 to have pushed strongly for the removal of organs from those who did not give their consent to becoming an organ donor.”

In fact, ethicists have long exposed the “consent” ruse, warning against “presumed consent.” This “legally assumes that everyone is automatically willing to be an organ donor unless they have documented an objection to it. Some states already have laws to enforce organ donation if a person has signed an organ donation card, regardless of family objections.”

The overwhelming trend toward disregard for the rights of the living gives any thinking person reason to pause and to long for a simpler time when our loved ones died naturally—when nobody was rushing to ensure that they died at a convenient time or for a ludicrous, utilitarian reason.

I am reminded by a song lyric that pleads, “Find me somebody to love.” The phrase seems rather corny, but in today’s culture, where organ-robbing is the antithesis of loving human persons, perhaps we should revisit the whole idea of what love really means.