Trending Now
You are at:Home»Featured»Five Reasons to See and Talk About Noah
By Sr. Theresa Aletheia Noble on April 15, 2014 Featured, On TV and Movies 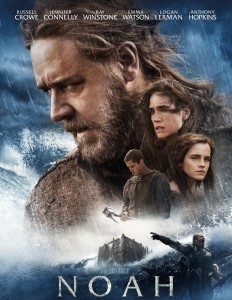 I confess. I did not go into the movie Noah with a tabula rasa. I first read the scathing review of popular blogger, Matt Walsh. Then, curiosity peaked, I watched Sr. Rose Pacatte’s review. She loved it. Confused, but also intrigued, I decided I would just have to see for myself.

There have been a wide range of views in the Christian community about this film, exemplified in the reactions of Sr. Rose and Matt.

Rick Warren, the well-known pastor of Saddleback Church, took offense before seeing the movie. And he is not alone. Some Christians, with or without seeing the film, have responded to the film with disgust, umbrage and ruffled feathers.

Perhaps it is the fact that the writer-director, Darren Aronofsky, is a self-professed atheist who did not set out to tell the Bible story exactly as it was recorded. Or perhaps it is because the character of Noah in the movie is, at times, disturbingly violent and angry. Or maybe the telling of this story doesn’t merge well with our fairy-tale, plasticized versions of the Noah of childhood memories.

It could be any number of these things. All I know is that I enjoyed the film, and with this in mind, I want to share with you five reasons to go to see the film, talk about it and decide for yourself:

1. The Need to Share Our Stories: “How dare someone steal and interpret with liberties our precious heritage!” This is the attitude I am picking up among some Christians. It seems we feel that the story of Noah somehow “belongs” to us. However, the story of Noah does not belong to Christians.

Obviously, it is in what we call the Old Testament so it first “belonged” to the Jewish tradition. Islam also claims Noah as one of its prophets. So, this is a story that “belongs,” at the least, to the three major world religions. Not to mention the fact that it is a human story, so Noah really belongs to us all.

Before I get harried comments about religious relativism, I want to emphasize that, as a Christian, I absolutely believe that the story of Noah does belong, in a sense, to salvation history. It is only in the context of the coming of Jesus that the story can be fully and properly understood. But this does not mean that people of other faiths and even those with no faith, cannot fruitfully explore this primordial story and help Christians understand more deeply the truth that underlies it.

2. Strict Literalism is not Catholic: I’ll admit I was a little disappointed to see several elements in the movie that were not the same as the biblical story. But Darren Aronofsky has made it clear that he was not setting out to make a movie that strictly corresponds to the biblical story. And considering his Jewish background, this was not a surprising approach, as Fr. Barron so aptly pointed out in his excellent review of the movie.

Jewish tradition is not as married to literal readings of Scripture as some Christian denominations. And the Catholic approach to reading Scripture is actually closer to our Jewish brothers and sisters than to some of our Protestant brethren who insist on strict, literal interpretations of Scripture all of the time. If you don’t believe me, read this.

By straying from some of the details, Aronofsky manages to communicate what is perhaps a more central theme in Scripture, the justice and mercy of God. Some reviewers were perturbed that Noah becomes homicidal at one point in the movie. He is convinced that it is God’s will that the human race come to an end, therefore he decides to ensure that this happens.

First of all, it is important to note that Noah is seeking what he believes to be God’s will, not his own. Secondly, is this such a strange conclusion? Genesis 6:6 tells us that the “Lord regretted making human beings on the earth.” Sin leads to death, in this world and in the next. In justice, we deserve to die.

Sound harsh? What is the meaning of Easter if this is not true? Jesus has saved us from the death we deserve because of our sins. My point is that, without giving too much away, Noah hones in on the truth of the justice of God, only to realize that God’s mercy is what saves us, all very Christian ideas.

3. The Gnosticism Question: Before I saw the movie, I read Dr. Brian Mattson’s review of the film which criticizes what he sees as Gnostic influences. I think he makes good points. But I disagree with his interpretation of the luminous bodies of Adam and Eve and the prominent role of the snakeskin in the movie as signs of Gnostic influences. I also found another interesting interpretation of the “zohar” from a Jewish blogger that was different from Dr. Mattson’s take.

Firstly, I believe the luminescent bodies were an artistic as well as a practical choice to avoid the obvious problems that arise with complete nudity in a PG-13 movie. As for the snakeskin, my interpretation was that the snake shed its natural goodness as a created being in order to tempt Eve.

The skin of the snake represented the goodness of creation, of man, that God originally intended. I thought maybe I was being too obvious and was missing out on the Gnostic symbolism. However, other reviewers as well as the co-writer of the film, Ari Handel, gave a similar interpretation. And Handel wrote it, so I tend to trust his take on it.

Anyway, whatever your point of view, these are all good things to discuss after watching this movie…

4. Starting the Conversation: Many people have picked up some agendas in the movie. There is an emphasis on ecological concerns, which is not a bad thing as Sr. Rose, Deacon Steven Greydanus and Fr. Robert Barron all point out. Respect for our natural world is part of Catholic social teaching.

There also is also an obvious bent toward animal rights language in the film. Some have dismissed it as vegan propaganda. But again, in perspective, concern for animals is a great theme to discuss. The ideas that Aronofsky proposes are rooted, to some extent, in Scripture and in Midrash.

There is increasing concern for animals in our world. Some of this is out of balance with concern for human life and is based on an inability to see humanity as the pinnacle of creation, (the central criticism in Deacon Steven’s review of this film). But the humane treatment of animals is important and thankfully it is a thing of concern in our world – and should be a thing of concern for Christians as well (as Sr. Helena points out in her review).

5. Art, Art, Art: I think films, especially Christian films, should strive to be works of art: subtle, intelligent, beautiful and thought-provoking. I think Noah is all these things.

The film is obviously painstakingly researched. This review from The Telegraph mentions that Aronofsky used Midrashim, the Book of Enoch and Jubilee, and even 15th-century Chester Mystery Plays (which were dismissed as “popery” at the time), as well as paintings like Albrecht Dürer’s Dream Vision. The costumes in the movie are works of art in themselves, (if you see the film notice the textile work, especially the blanket that Noah’s sons throw on him near the end of the film).

In the end, I think if it takes an atheist with no investment in catering to certain points of view to show us the beauty of this Bible story, and to tell it with originality and imagination, then maybe we need more atheists telling us our own stories!

There is a lot to talk about in this film. The extreme reactions to it point neither to its brilliance or its worthlessness. Instead these reactions point to the fact that this is a work of art, a work that is meant to elicit reactions, good and bad. That’s one reason why I think this is a film worth seeing and discussing.

Sr. Marie Paul, FSP points out that this film is for mature Christians. I agree. Like her, I like to give people the benefit of the doubt and hope that films like this will lead mature Christians to good conversations about the faith and will lead others closer to God.