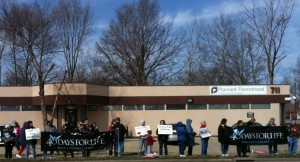 Some weeks ago a group of young people, in their late 20s and early 30s, began showing up on the sidewalk in front of a local abortion facility where I and dozens of other pro life witnesses from Catholics United for Life have done sidewalk counseling for many years.

They are an energetic bunch, full of zeal. They, rightfully, are convinced of the evil of abortion, and make that known in their communications to the women coming for an abortion. They tell me that they view themselves as being part of a new anti-abortion movement modeled on the American anti-slavery abolitionist movement. One of these young people even followed that model into a federal prison where he recently served 18 months for trying to fire bomb a Baptist church building.

They bring and display large signs with graphic pictures of babies dismembered by abortion, and any of those signs also contain some kind of “or else” warning. But mainly they bring an accusatory and judgmental message that is devoid of mercy. They hurl accusations at the abortion seekers: sinners, killers, murderers, and more. They shout accusations at them on the way into the facility, and again when they make their way out after their abortions.

(They also do not like Catholics very much, and spend a good deal of time raising every old anti-Catholic canard that they have heard about or thought they heard about. At times they do not seem to know whether to turn their condemnations against my fellow Catholics or to focus on the abortion seekers. Frequently, they try to do both at the same time. Sadly, this is one of the many consequences of the 16th century division of Christendom that continues to this day.)

These young men and women have heard, and can repeat verses from the Scriptures and parts of sermons preached to them. But, to paraphrase St. Luke in the Acts of the Apostles, they hear but they do not understand, and they see but they do not perceive.

The Jesus whose message they say that they preach at the abortion facility is indeed the Jesus who frequently castigated the Pharisees, and scribes, and even the priestly priests. But these young zealots fail to understand or to perceive that he called out members of those elite groups, and not infrequently did so with great intensity, because he knew that they should know better.

He knew that they were persons of material privilege and of power in Judaism, and that they had been well educated in the Scriptures and the precepts of God. Of all the people in Israel it was these who had been given the responsibility of protecting the Hebrew faith, and of leading the people to faithfulness to Yahweh and their ancient covenant with Him. More importantly, it was to these individuals whom God had specially entrusted with a duty to be instruments of His love and mercy, and they had grossly breached that duty.

But many of the Pharisees, scribes, and priests had lost sight of the big picture.  Spiritual life had become ritual observance only, unrelated to an interior personal faith and a sincere love of God. Religion had become nothing more than an accoutrement, a sign of their power and prestige.

It was this superficiality, and rejection of the true Jewish faith that drove Jesus to challenge them so fiercely, and call them back to the heart of the ancient covenant. It was their willful corruption of the the love relationship between them and his Father, who loved them first and always and who were invited to respond to that love unconditionally, that provoked and moved Jesus to his challenges and sometimes condemnations of these Jewish leaders.

Jesus did not generally approach the common man and common woman, those without power and privilege, in the same way that he did the cultural and religious elites. The Samaritan woman in Sychar at Jacob’s well was, by Jesus’ own words, not living a moral life. She had five husbands, and at the time of her encounter with Jesus was living with a man without benefit of marriage.

The adulteress whom Jesus saved from stoning, was surely not protected by him because he did not think that she had committed serious sin. He knew their sins, just as he knew the sins of the Pharasees.

This was the same Jesus who bluntly told all Jews that if they violated their marital vows they contravened the Sixth Commandment, and just a bluntly preached that even if they divorced and remarried they still committed adultery. Recall too that Jesus’ last words to the adulteress as he dismissed her was his command: “Go, and sin no more.”

The state of the moral lives of these two common people was not an issue; it was a given…and an opportunity. What was important was an encounter with mercy, that is, with Mercy himself, which would provoke the recognition by them of their moral state, and so provide the opportunity to repair their broken relationship with his Father.

In contrast, there were so many of the Jewish elite, especially in Jerusalem, who refused to recognize their own sins, and to admit to their own need for forgiveness and mercy. Sinners were others. Sinners were different from them. Their self righteousness left no need for mercy for themselves, and no room for mercy for others.

Those young 21st century “Pharisees” who show up at the abortion facility are so blinded by their own arrogance and pride that they find it impossible to offer the most important pro life gift that the angry, confused, arrogant, deceived, and/or selfish pregnant abortion seeking woman needs to hear in front of an facility: Mercy!

They cannot understand what is right there before them. They cannot perceive the humble, quiet but extravagant power of God. They cannot accept the gift of the magnetism of their youth that could be put to great and powerful use.

They claim to believe in the grace of God, but like the Pharisees and scribes and priests whom Jesus encountered, it is so foreign to their mind set that they cannot recognize it. Yet there is no loss or compromise of the truth when mercy and goodness are offered to the sinner in need. We do not repudiate the truth if we act mercifully with the truth to teach the truth.

And it is surely appropriate at the proper time and venue to firmly and clearly call out both abortion mongering politicians who press for child killing laws and who traffic in the blood of innocents for votes and power, and Christian clergy and laity who twist the Gospel of Jesus Christ for money, selfish pride, and ideological comfort. These elites are largely no different than those elites whom Jesus encountered in his day. But even for them, ultimately it is mercy in service to the truth that should be our goal.

The mothers and their enabling families and/or partners who come to abortion centers are mostly not wealthy, and likely have not a scintilla of a claim to membership in any elite segment of our society. Actually, it is almost always the opposite.

They are as common as the woman at the well, and the adulteress caught in the act of sin. In fact, they are the elites’ throwaways, whose children they have labeled as “unwanted,” and no more than the price of their continued power and material privilege.

The women at these facilities seeking abortions may say ugly and hateful words to pro life witnesses who seek to help them, but that merely reveals that they know what they are doing is morally wrong, and that it is bothering them. They don’t need condemnation. They are doing that all by themselves.

What they are looking for is a way out, even if they likely will not have the strength to take that way out when it is offered. More than anything they are looking for mercy.  Would that the young zealots would close their mouths, and open their minds and hearts long enough to understand this.