Trending Now
You are at:Home»Featured»Food Fights and Free Enterprise
By Jordan J. Ballor on January 7, 2012 Featured, The Economy 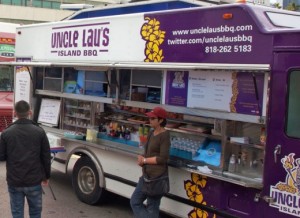 It is sometimes said, following Milton Friedman’s insight, that business is not a friend to the free market, and the truth of this is no more evident than in recent battles between established restaurateurs and operators of mobile eateries. Once a business becomes established and enjoys a measure of success, a narrow view of its own interests can lead its principals to thwart innovation by others, and this is usually done by influencing the way laws are enacted or enforced. At the local level, this kind of rigging of the system is often done through zoning restrictions and other regulatory measures by city and county governments.

In the case of the food industry, these kinds of fights are increasingly occurring between brick-and-mortar restaurants and mobile food trucks. Earlier this year Entrepreneur magazine observed the spread of a “food-truck craze” across the country, which includes new startups as well as interest from already-established franchises like Taco Bell, Qdoba, and Subway. There’s perhaps no more basic way to serve another person than to provide them with food, as Lester DeKoster has noted in his book, Work: The Meaning of Your Life—A Christian Perspective. With Jesus’ explanation of the parable in Matthew 25, DeKoster notes that Jesus “waits in the hungry man or woman or child, longing to be served,” and that “God himself, hungering in the hungry, is served” by all those people who work in food-related industries. The barriers to entry for a food truck are far lower than for a traditional restaurant, and these enterprises can be a wonderful opportunity for culinary entrepreneurs to start their own small businesses and find God “hungering in the hungry.”

But as Jason Daley writes, the spread of the food-truck phenomenon is limited by local environments: “Varying laws have formed a mosaic of food-truck hot spots and not spots around the country.” Food trucks are embraced in cities like Los Angeles and New York. But Chicago has placed limits on what food can be prepared inside trucks. According to APM’s Marketplace, the Chicago regulations prohibit food trucks from being “licensed kitchens,” which means that all the food sold on the truck must be cooked and prepared elsewhere.

The challenge to established interests represented by food trucks is not merely the stuff of big cities, however. Grand Rapids, Michigan, has had its own food fight in recent weeks, as a food truck startup called “What the Truck” began with an agenda to change “the Grand Rapids culinary landscape one street at a time.” Food trucks saw some pushback from local restaurateurs as the Grand Rapids Planning Commission considered changes to ordinances that would allow food trucks more freedom to operate. According to the commission, “The consensus among those brick and mortar business owners was that temporary concession sales would undermine their businesses.  A number of business owners have submitted letters stating their opposition to the amendment under consideration.”

This caused What the Truck to take the fight to Facebook, rallying supporters to appear at a recent commission meeting to lobby for a meeting earlier this month, where the commission decided to table a final decision about rewriting the zoning ordinances until the spring. In the meantime, one of the original opponents of changes to the food truck zoning, Tommy Brann, has changed his stance on the issue, citing the entrepreneurial examples of Rich DeVos and Steve Jobs, and how “free enterprise allowed them to become successful, just as a future brick & mortar restaurateur could get a start from a food truck.” Brann, one of the proprietors of the Grand Rapids-based Brann’s Steakhouse and Grill, recently held a rally for free enterprise in Grand Rapids, and it is apparent that in admitting the problems with his previous position he’s taken a position in favor of free enterprise and against special protection for established interests.

We can hope that Brann’s example will help show that food trucks represent a valid and valuable part of the culinary landscape of American cities, and that the “food-truck craze” will not be slowed down by intransigent city councils and planning commissions. And while the start-up costs for a food truck might well be lower than opening a sit-down establishment, the margins might be lower and less reliable as well. So as food truck startups find success, they might also realize that putting down roots in a community with a brick-and-mortar location can benefit both the community and the bottom line. This has already begun happening in places like New York City, where the food truck industry has been given a chance to grow and mature. As Tracey Samuelson reports, “while food trucks are often talked about as a new, disruptive business model, for most owners, they’re more like a cautious first step.”

Let’s hope this is a first step that America’s cities, entrepreneurs, and restaurateurs are increasingly ready to take.