Trending Now
You are at:Home»Featured»Freezers are for Food
By Jennifer Lahl on July 6, 2012 Featured, Reproductive Technology, Women 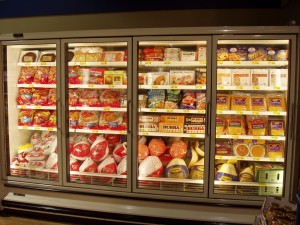 In the world of commercialized conception, it seems we’ve decided the freezer is a great place to keep eggs, sperm, and “spare” embryos until we need them. We think they do pretty well in the freezer, but the verdict is still out on what happens over the long haul when you freeze and store human reproductive material and nascent human life. Commercial conceivers simply assume that because we can freeze and thaw our reproductive cells or progeny, it causes no harm or danger.

And not only can we do it; it has become big business.

Case in point: the new fad of egg freezing. It began with the laudable goal of helping the younger woman who was diagnosed with cancer. A woman facing cancer treatment is at risk for compromised fertility induced by chemotherapy. Egg freezing was used to try to preserve and protect her fertility, so that after her cancer treatment was completed and her health was restored, she might still be able to conceive — using in vitro fertilization — her own biological child. It is also used in veterinary medicine to preserve species, especially endangered species.

But this new egg-freezing industry has popped up more and more as a lifestyle choice. Maybe, baby later. National Public Radio devoted a segment to this fad titled, “Egg Freezing Puts the Biological Clock on Hold.” They reported, “As more women postpone motherhood into their 30s, even 40s, they’re hitting that age-old constraint: the biological clock. Now, technology is dangling the possibility that women can stop that clock, at least for a while.”

Even grandparents are getting into (and paying for) the act! The New York Times heralded, “So Eager for Grandchildren, They’re Paying the Egg-Freezing Clinic”! The story paints this picture, “The gray-haired entourages, it turns out, are the parents, tagging along to lend support — emotional and often financial — as their daughters turn to the fledgling field of egg freezing to improve their chances of having children later on, when they are ready to start a family.”

But of course, the facts seem to get lost in all the hoopla over a newfangled way to manipulate reproduction.

First, there is the pragmatic reality of the cost of this new experimental service. I called one egg freezing agency in Southern California, and the woman I spoke with was putting the hard sell on me. I explained I was only writing an article on this and wasn’t interested in this for myself! The costs are high – meaning if you are poor, don’t even think about freezing your eggs. It’s about $7,000 to $12,000 to harvest the eggs, and an additional $4,000 to $5,000 later to transfer the embryos into the woman’s uterus once she’s ready to have a baby. Then there are the fertility drugs to super ovulate the woman in order to maximize the number of eggs retrieve, adding an additional $2,700. Plus the annual storage fee of $300 to $600.

Then, there are the medical realities. Nowhere on any egg freezing sites that I visited did anyone disclose the realities of the risks to women and children related to maternal age and pregnancy. I’ve written before about the risks of advanced maternal age which heightens the risk of “fetal loss” – meaning age increases the likelihood that she won’t carry the baby to term.

There is an increasing risk of fetal loss with increasing maternal age in women aged more than 30 years. Fetal loss is high in women in their late 30s or older, irrespective of reproductive history. This should be taken into consideration in pregnancy planning and counseling.

Shouldn’t a technology that claims to be able to put the biological clock on hold be accountable for disclosing the maternal-child health risks to women?

And this is still experimental science. Even the sites that show their methods and success rates show that this is a field still learning about the best methods and techniques. Do women really, if properly informed, want to experiment on their future children? This graph demonstrates the wide range of “success” depending on the freezing method: 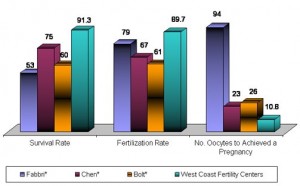 I say freezers are for food, like the Thanksgiving turkey, not for our future progeny.
The Human Egg Freezing Project (West Coast Fertility Center, YouTube):