Trending Now
You are at:Home»Featured»Getting a Grip and Letting Go: The Iron Lady
By Susan Soesbe on December 29, 2011 Featured, On TV and Movies 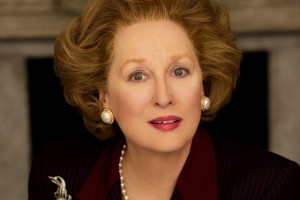 When I heard that Meryl Streep would portray Margaret Thatcher in an upcoming film, I was immediately interested, assuming that  The Iron Lady would examine the legacy of the Conservative heroine. I was wrong.

In 1976, Margaret Thatcher, then the leader of the British Conservative Party, was dubbed by the Soviets “The Iron Lady” for her staunch opposition to communism. After leading her party to victory in the 1979 general election, Thatcher became the country’s first female Prime Minister. In the decade following, she refused to negotiate with terrorists and hunger strikers. She broke the unions. She repelled the Argentinian invasion of the Falkland Islands. She pursued a policy of spending cuts, notwithstanding the recession and a high unemployment rate. “To cure the British disease with socialism,” declared Mrs Thatcher,” was like trying to cure leukemia with leeches.”

During her term of office she reshaped almost every aspect of British politics. She was both loved and hated. Wouldn’t it be enlightening, then, to look back on Mrs. Thatcher’s policies and examine her legacy over twenty years later?

Maybe in a different movie. The Iron Lady is not a biopic. While those who are familiar with the political scene in Britain in the 1980s will recognize scenes, issues and people, the focus is squarely on the lady herself, and not just Thatcher, but Thatcher at age 85, looking back over the years. Or, still more correctly, how the screenwriter Abi Morgan has chosen to portray Mrs. Thatcher’s thoughts and feelings as she looks back on her life at age 85. As the director, Phyllida Lloyd explains, this “was an act of pure imagination.”

Those who are familiar with Mrs. Thatcher’s career will see little of it depicted in this movie, only some paraphrased versions of her speeches here and some footage there. And those unfamiliar with the Thatcher years may be confused. What comes through clearly is the isolation and difficulty of being a leader. The fact that Margaret Thatcher, the grocer’s daughter, was from the lower class was a greater barrier to power than the fact that she was a woman.

The Iron Lady is therefore an artist’s conception of a person who fought class and gender prejudice to gain power and influence, enjoyed and wielded it in her prime, then grew old and lost power. In this sense, it is reminiscent of “King Lear”. But instead of raging on the heath, Mrs. Thatcher is shuffling about in her apartment and having imaginary conversations with her husband of 53 years, Denis, who died eight years before the film opens.

The movie is comprised of flashbacks. We see Margaret’s early years, and especially her unconventional-for-the-time romance with Denis Thatcher (young Denis is portrayed winningly by Harry Lloyd, followed by Jim Broadbent). Denis Thatcher’s presence looms large over the film, which takes place over a few days in which the elderly Margaret has finally decided to give away her deceased  husband’s clothing. Anyone who has undertaken the task of sorting through the possessions of a departed loved one will understand the emotions such an activity will excite. In one sense, Margaret is like us, coming to grips with loss. And yet, who of us, having lived through a terrorist hotel bombing in which five people were killed and 31 injured,  would emerge from the wreckage and, in defiance of the bombers, insist that the conference open on time the next day and make a speech as planned?

Morgan shows us a woman whose great convictions have carried her through. She was The Iron Lady, stubborn, determined, principled, keeping a stiff upper lip through it all. Interviews from the 1990s still show a clear-thinking, articulate and capable Margaret Thatcher. But the interviews and appearances stop in 2002, after she suffered a series of minor strokes. Today Mrs. Thatcher’s health is frail, and she generally stays in her home in London’s Chester Square. Morgan has young Margaret (Alexandra Roach) declare to Denis, “I will not die washing up tea cups.” But the movie’s final scene shows an elderly Mrs. Thatcher washing up tea cups.

The other presence that looms large over The Iron Lady is that of the incomparable Meryl Streep, who seems to have steeped herself in Margaret Thatcher’s voice, attitude expressions and mannerisms. Her excellent portrayal is enhanced by carefully-researched costumes, hairdos and makeup. Streep ages so convincingly that viewers will not waste a moment trying to figure out how it was done. In fact, The Iron Lady is, in general, technically superb, and the casting is top-notch, particularly Olivia Colman as a colorful and compassionate Carol, the Thatchers’ only daughter.

This film explores the pain of letting go: Margaret loses her power, her youth and her husband and friend, Denis. Morgan wants to get viewers inside Mrs. Thatcher’s head as her grip on reality wavers. What is it like to get so old you don’t know what year it is or whether or not your husband is alive? In one touching scene Carol gently brings her mother back to reality: “Mark lives in South Africa. And you’re not Prime Minister. And Dad’s dead.”

The Bible painfully and accurately describes old age as a time when “the watchmen of the house tremble, and mighty men stoop, the grinding ones stand idle because they are few, and those who look through windows grow dim…the silver cord is broken and the golden bowl is crushed, the pitcher by the well is shattered and the wheel at the cistern is crushed.” (Ecclesiates 12:3) Moses, the man of God, famously writes, “As for the days of our life, they contain seventy years, Or if due to strength, eighty years, yet their pride is but labor and sorrow; for soon it is gone and we fly away. Who understands the power of Your anger and Your fury, according to the fear that is due You?  So teach us to number our days, that we may present to You a heart of wisdom.” (Psalm 90:10-12)

The Iron Lady invites viewers to look back on our own lives, to anticipate our own waning years and perhaps to “remember [y]our creator in the days of [y]our youth.” (Ecclesiastes 12:1)