Trending Now
You are at:Home»Featured»Getting Off the Misery-Go-Round of Scrupulosity
By Trent Beattie on May 4, 2011 Featured, Live in Christ 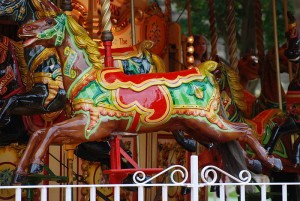 Mike had prayed for guidance before his confession and spent ten minutes going through an examination of conscience.  The troubling item did not occur to him until well after the confession and after the Mass had already started.  He thought, “Oh no, maybe I shouldn’t receive Holy Communion.  If I do, that would be a sacrilege.“  Then Mike went over his confession in his mind.  Then he went over it again.  And again.  And again.  “Even though I’m not sure if the item in question was a mortal sin or a venial sin, or even a sin at all, it very well might be, so I really can’t receive Holy Communion now.”

Then we see Robert, who had the same experience as Mike.  Both were faithful Catholics, believing all the Church teaches, attending Mass as often as possible, going to Confession every two weeks, etc.  Robert had prepared diligently for confession by praying and examining his conscience for ten minutes, which is definitely an adequate amount of time for someone like him to take.

Robert went to Mass after confessing, and only then did a troubling item occur to him.  “Oh no, maybe I shouldn’t receive Holy Communion.  If I do, that would be a sacrilege,” he thought.  However, far from letting this disquieting idea gain control of him, Robert smiled and reflected, “I prepared properly, didn’t purposely omit anything, and I’m not even sure if the item in question is a sin at all.  Now I’m going to receive Holy Communion.  If I’m damned, I’m damned, and I’ll bless the Lord all the more for that very fact.  I will bless the Lord at all times, his praise shall be always in my mouth.  Yippy skippy for me, the strangest man in Hell.”  Robert received Holy Communion and, interestingly enough, never thought of the troubling item again.

Mike had gotten caught up in the wave of scrupulosity, while Robert was not taken in, and actually turned the situation into a source of grace.  Robert’s previous scruples were the occasion for him to learn from the wisdom of Saint Philip Neri (1515-1595), who said, “The scrupulous should submit themselves always and in everything to the judgment of their confessor, and accustom themselves to have a contempt for their own scruples.”  Notice that Saint Philip tells us it’s not merely a polite disagreement, but a contempt for the scruples, a refusal to take them seriously, and even ruthless ridicule of them.

It is true that far more people suffer from laxity, or the notion that almost anything anyone wants to do is morally acceptable.  Those suffering from laxity would do well to take damnation much more seriously, because if they have acquired this moral viewpoint with full knowledge and complete consent, damnation will be in their future if they do not repent.  However, for those who are subject to scrupulosity, such as Mike and Robert, contempt for scruples should be accompanied by prayerful trust in God, giving oneself the benefit of the doubt, and obedience to one’s confessor, among other helpful things.

By implementing these helpful means in one’s life, the scrupulous will get off the merry-go-round of doubt and live more peaceful and productive lives.  “Misery-go-round” is actually a more accurate term, as endless doubt inevitably brings misery with it.  Saint Alphonsus Liguori (1696-1787) said, “With regard to those who walk in the way of perfection, the devil ordinarily [attempts to fill]their minds with scruples and troubles [so that]they may give up the practice of virtue, or abandon themselves to despair.“

However, there’s no need to fear, as recognizing this is one step toward overcoming it.  In fact, scrupulosity, while not a good thing in itself, can be an indication of being on the right path.  Saint John Vianney (1786-1859) tells us that “The devil only tempts those souls who wish to abandon sin and those in a state of grace.  The others belong to him; he has no need to tempt them.”  Those subject to scruples should not give in to the temptation of despair, but rejoice in that very temptation.

The temptations used against us by the Enemy are the very same ones God uses for our sanctification.  God would not allow evil or the possibility thereof, if good could not come out of it.  Saint Catherine of Siena (1347-1380) stated, “Everything comes from love, all is ordained for the salvation of man, God does nothing without this goal in mind.”  Once this is understood, the pursuit of sainthood can be undertaken with peace of mind and confidence in God, rather than with agitation of mind and distrust of God.

Peace of mind is at the heart of my recently-released book Scruples and Sainthood, written to help those suffering from scrupulosity to see their difficulties in the right light and address them more effectively.  In addition to the topics mentioned above, chapters include helpful information on the theological virtue of charity, the great efficacy of Marian devotion, and the usefulness of oftentimes-forgotten sacramentals.  Indeed, the Church abounds with remedies for the scrupulous, many of which are described in Scruples and Sainthood, a helpful book for those who want to get off the misery-go-round of scrupulosity.