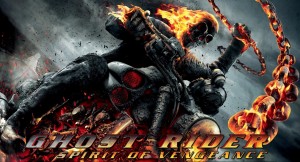 In Ghost Rider: Spirit of Vengeance, Nicholas Cage returns as Johnny Blaze, the man who once made a deal with the devil to save his father’s life, and became the devil’s bounty hunter. In the original Ghost Rider film, when he is in the presence of evil, Blaze turns into the Ghost Rider, a flaming skeleton in riding leathers who eats the souls of the wicked. Despite the demon that inhabits his body, Blaze struggles to bring good out of evil.

Ghost Rider: Spirit of Vengeance opens with Blaze still contending with his dual nature. When in his human form, Blaze detests what he has become, so he isolates himself from people. But there is one more mission waiting for him. Roarke – the devil incarnate — is seeking a boy for reasons that become clear later in the film. Moreau, an emissary from the Church, locates Blaze to enlist him in the fight to save the child. What Moreau offers Blaze in exchange for his services is his heart’s desire, the lifting of the curse.

Like Johnny Blaze, the film is a spiritual hybrid. There are a couple of moments in the movie that might give viewers real spiritual pause. As Blaze narrates his back story to those viewers who did not see the original film, he explains how he hunts evil people. But lest viewers think that they live in comparative moral safety – the same folks who, when confronted with the theological reality of sin, reply “Well, I never killed anybody” – Blaze sets them straight. In a list that could be out of Romans 1:28-32, Blaze includes people who have illegally downloaded things off the Internet. In other words, “all have sinned…”

Conversely, no one is beyond redemption, not even Blaze. And the film is not shy about crediting Jesus with that redemptive power. It is rare in Hollywood film to see Christ as the one who breaks the chains of the devil.

But problems abound as well. What kind of church offers redemption as part of a quid pro quo arrangement? This is a salvation-by-works story. But God does not bargain. In fact, just the opposite. The scriptures tell us that while we were His enemies, Christ died for sinners (Romans 5:6-8). Salvation is a gift, not a paycheck.

Ghost Rider: Spirit of Vengeance also stumbles into the same pit as most supernatural films. While God is credited with a kind of gauzy transcendence – effective for saving your soul in the next world – real, visceral power in this life lies with the forces of darkness. Even the good guy gets the power needed to get the job done from the devil. Oh, and guns.

With few exceptions, February is the month that Hollywood takes out the trash. Ghost Rider: Spirit of Vengeance is like a piece of rotten fruit. There might be a little nourishment left in it, but no one should have to get through the mold and decay to get at it. The original Ghost Rider developed a cult following and rode to over $115M at the box office, despite being roundly panned by critics. But this time around the film simply does not work, for critics or audiences. So while there are some ideas worth discussing in this film, you can find the same content in other, better movies. But if you come across others who have seen it, it will provide an opening for you to ask some very interesting theological questions.