Need a little dose of humility?  Try testifying before a legislative committee in Olympia, Washington chaired by condescending Senator, Karen Keiser.  Want to be humbled?  Get reprimanded by this same pro-abortion Senator calling herself a Lutheran Christian, who co-sponsored the redefinition of marriage bill, and who has been homesteading in the legislature for 16 years.

The experience makes you realize how little Ben Franklin knew and how little distinction you yourself have as a citizen.  Of course Washington State did not exist when Franklin said that the office of public servant ranked below that of citizen.  Still, even people unfamiliar with Franklin’s maxim might intuitively suppose that Senator Keiser and her fellow “public servants” on the Health & Long-term Care committee would recognize the subordination of a state senator to the citizens who pay their salaries, and would welcome their philosophical input into the legislative process. 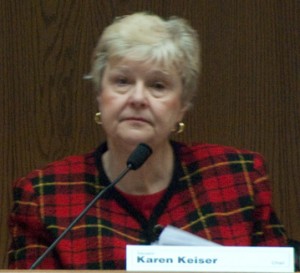 But you might want to revise your supposition after you espouse the pro-life cause in Olympia and get your testimony interrupted, get scolded for “reading a speech,” and hear the chairman accuse the Knights of Columbus of “hijacking Christianity.” You might then be more inclined to the proposition that politicians regard mere citizens as political peons.

Testify before the committee that the KCs “will fight – by whatever means accord with the Catechism of the Catholic Church – for the right to adhere in Washington State to the dictates of a Christian conscience.”  And then count yourself lucky that the public servant wielding the gavel did not curtail the entirety of your testimony before she publicly solicited a scheduled witness, Rev. Elisabeth Patrick, to rebut the KC statement on this issue.

The designated witness, Rev. Patrick, turned out to be quite a case.   She identified herself to the committee as a minister from University Baptist Church in Seattle.  This organization is described on its official internet site as “a member of the Association of Welcoming & Affirming Baptists.”  AWAB is described as “the national voice for lesbian, gay, bisexual and transgender Baptists.”  And the site adds, “we also celebrate and affirm their holiness!”

This ecclesial assembly in Seattle is led by pastor J. Manny Santiago.  He describes himself as “a queer Latino … (living) with my partner Ferneli Hernández and our three years old kitty, Susa.”  Surprisingly, a telephone conversation with Santiago revealed that the witness in Olympia, Rev. Patrick, is not on staff at all, but is rather a volunteer from the congregation with some sort of ministerial certificate associated with AWAB.  (I neglected to inquire more exactly into Ms. Patrick’s credentials; nor, I suspect, did Senator Keiser).

In Ms. Patrick’s testimony to the committee she stated twice, “it is because of my religious beliefs that I support abortion.”  This was about as direct as she got in answering the chair’s request to rebut the KC’s hijacking of Christianity with our testimony about Christian conscience.

Here, then, is the Knights’ testimony as I delivered it to the committee; the written form in its entirety to members, while at the behest of chairman Keiser I orally omitted the paragraph pertaining to Mother Joseph:

Knights of Columbus, testimony by Bob Struble to a committee
of the Washington State Senate on 2/17/2012, against HB 2330.

State Deputy, Don McBride, head of the Knights of Columbus for WA state, lives in Tri-Cities and regrets that he is unable to be here today.  But Don called yesterday and asked me to represent the Knights.  I am lecturer for the KC’s in Bremerton, council 1379, and vice-chairman of our Catholic Action Committee.

First let me express my regret that – should it pass – June 7th is the day designated for both this bill and for same-sex-marriage to go legally into effect.  June 7th, it so happens, is my birthday, and I dare say you really know how to squelch a birthday party.  However, if you reflect seriously on the matter, abortion and birthdays are obviously about as far apart as fire and water, or indeed as antithetical as death and life.

This bill is an insult to the people, and in two ways an affront.  First, as a practical matter, it may put still more money into the pockets of abortion mills in this state, most notably Planned Parenthood.  Secondly it will, directly or indirectly, require citizens who see abortion as a great crime to either spend money, or to facilitate informationally, the taking of innocent human life.  The bill would force Christians, religious Jews, and Muslims to refer mothers to death clinics!

On the contrary, senators, the Knights of Columbus support the picketing of abortion clinics and the distribution of pro-life brochures; not, as this bill would require, the distributing of information on how to commit the sin of abortion.

The Knights of Columbus are aghast that government would apply a double standard on conscience.  On Monday of this week a pride of political lions (actually a lesser species of animal might be a better comparison) gathered here to applaud and cheer Gov. Gregoire’s signing of the same sex marriage bill.  She insisted that her rights of personal conscience trumped the teachings of her Church on this issue (she is a parishioner at St. Michael’s Catholic Church in Olympia).  And she was lauded by many of you for taking this stand. 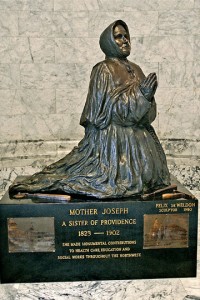 Yes, senators, in this government if your conscience leads you to oppose the Christian religion, you become a hero, standing in defense of the rights of conscience.  Maybe you’ll get statues of like-minded political allies to replace those of the genuine Christian heroes ­– Rev. Marcus Whitman and Mother Joseph – who are enshrined at the main entryway, at the front entrance, to our capitol building.

Indeed if citizens are loyal to the country’s Judeo-Christian heritage, and if we develop a conscience based on Sacred Scripture and Sacred Tradition, then in the view of the majority around here we are backward and impudent.  How dare we gainsay the omniscient politicians who decree that we disregard our consciences, and pay (directly or indirectly) for insurance policies, or distribute written instructions that facilitate the ongoing holocaust of abortion?  How dare we refuse to cooperate when a mother wants not only to kill her offspring, but also to have the procedure promoted by her employer, via an insurance policy, or informational brochure, which the boss is compelled to keep on hand and provide, despite the boss’s moral scruples?

Of course there are politicians who dismiss hypocrisy itself as a bourgeois concept.  After all it’s the end result that matters, right?  The “unwanted” baby is disposed of, however the process happens to be promoted or financed.  The overriding consideration, it seems, is that if conscience informed by religion gets in the way, then too bad for religion, and too bad for our conscience if it conflicts with yours or Gov. Gregoire’s.

“Too bad for you and your antiquated superstitions:” This seems to be the rationale for disregarding the rights of conscience held by religious people – by the descendants of the Pilgrims who founded this country – and for trampling our consciences underfoot like so much straw.

Senators:  The Knights of Columbus oppose this bill with every fiber of our being, and we will fight – by whatever means accord with the Catechism of the Catholic Church – for the right to adhere in Washington State to the dictates of a Christian conscience.