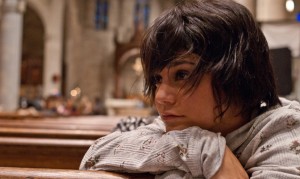 I got a chance tonight to grab a few friends and go see Gimme Shelter staring Vanessa Hudgens. I was looking forward to supporting a movie that would tell the story of a young woman’s struggle through a harrowing life and teen pregnancy. It would be a movie that would not insult my ears with record-breaking F-bombs, or shameless nudity and sex scenes.

While it was a Monday night and not normally busy at the theater, we remained the only seven souls in the place just three nights after its opening. We all found ourselves saddened by the lack of viewers, or supporters of a pro-life message, and feel good story so rarely found in the media today.

The story was compelling and engaging. We felt it was well acted and not over the top with its message. Yet, most all the reviews I have read rip the movie to pieces. Secular society can’t be reminded in any way shape or form that a young woman in Apple’s situation might actually want her child to live rather than be dismembered limb by limb and never thought of again. Perhaps her child could have a better life than she did. No, abortion is the only logical and intelligent choice and anything other than that is just poor writing, directing and movie making. How pathetic, and small minded. Can we get you more kool-aid?

Apparently, The Wolf of Wall Street  “has been packing them in” and “hunting for Oscars.” After watching the previews, it seems we have more of the same old thing in store. How boring, tedious, and monotonous. Mindless, limitless sex without consequences, record breaking swearing, killing without purpose, and vampires. Gees, can we get some young people who can write something more profound and less exasperating?

Where do you spend your money Christians? What do you let into your minds and hearts? What are you telling Hollywood with your support of such films…and lack of others? If Christians are not putting their money and time behind genuine efforts to produce films not filled with filth, mind-numbing profanity, gratuitous sex or just plain insulting stupidity, then expect to see less and less movies worth seeing.

Hollywood, when not blatantly poisoning minds, is most interested in making money. We so-called Christians have more power than we think by voting with our wallets. Can we really stand to go see another putrid vampire saga?

We must stop hiding in our homes with our little lights covered under politically correct bushel baskets as truth, beauty and goodness are trampled. Get off your duffs and go support a good film. Tell others about it and help spread the word.

If we don’t, we can stop wringing our hands and whining, cause it will be our own inaction that lets the darkness cover more ground.