Trending Now
You are at:Home»Featured»God and Man at CPAC: Facing the 2012 Election
By Dr. Marvin Folkertsma on February 13, 2012 Featured, Government & Politics 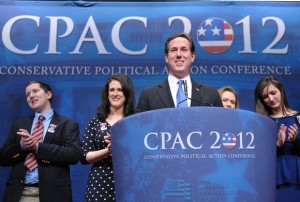 Amidst the hoopla, cheers, and ear-piercing whistles of enthusiastic approval for Republican presidential nominees at this year’s Conservative Political Action Conference, several themes emerged. The most important of these centered on the conflict between what may be titled American foundationalism versus contemporary progressivism. Foundationalism embodies a family of concepts ordered hierarchically from God, the Declaration of Independence, and the Constitution. It is essentially theological in nature and emphasizes the role of immutable truths about the sources of law, rights, and duties, along with the relationships between citizens and their governments. Immutable is the key word here; foundationalists stress that rights, for instance, are “unalienable” and inextricably bound with nature and “Nature’s God,” and that the sole function of government is to protect what cannot be created nor abridged without egregious moral violence to the individual. Attached to this idea is a narrative, which extols the spread of what Thomas Jefferson touted as “An Empire of Liberty,” and in history books that once were graced with titles such as “The Story of Freedom.”

Not so fast, say the progressives. Rights are neither immutable nor unalienable, and the documents supporting such views are time-bound and almost laughably out of date. Indeed, the founding era should be understood as nothing more than a late 18th-century conception of government that perhaps suited the needs of the young republic, but is now inadequate to address contemporary social and political demands. The idea of a social contract is ridiculous, assert progressives, and limiting government to the skeleton “laundry list” of powers found in Article One, Section Eight of the Constitution stymies efforts to deal with pressing problems that have beset the country since post-Civil War industrialization, which is about the time that progressivism was born.

How can a two-centuries-old document be relevant in an age assaulted by cries for social and environmental justice, not to mention the rights to health care and free contraception? Activist governments cannot possibly deal with modern problems in a system of checks and balances; furthermore, as needs change, so does our emerging consciousness of new, additional rights, which are created by Congress, the courts, and administrative agencies. Throughout all this, God may be lurking somewhere but in all events is irrelevant; the Almighty’s sovereignty over the affairs of mankind has been replaced by History with a capital H. And it is History, not God, which marches through time with the inexorability of some metaphysical beast on a quest to realize the satisfaction of all humanity’s yearnings and the termination of everyone’s travails.

What is one to make of all this? Certainly each view has its attractions, its defenders, and its critics. Foundationalism without question served the country superbly during America’s formative decades, but progressives also had a point when they condemned strict constructionist views of the Constitution for inadequately coping with problems generated by the country’s growth into the world’s foremost industrial power. On the other hand, foundationalists argue that dismissing constitutional safeguards with criticisms based on the moral relativism of the founding era has resulted in a monstrous administrative state that even its creators in Congress cannot hold accountable.

Which side is correct? Although CPAC speakers emphasized the role of ideas in the coming election, unfortunately, the position of those who argue against them is largely determined by the benefits they receive from America’s administrative state, following their economic interests with the sort of predictability that even Karl Marx would admire. Does anyone think that teachers’ and public-sector unions will abjure their plethora of taxpayer-funded benefits for the sake of some “silly” ideas about the role of constitutionalism and limited government?

However, beneath such purely economic considerations lies a central philosophical incoherence that threatens to derail the entire progressive project. If History consigned the founding era to a status of historical irrelevance, who can say that progressivism, which is also a product of historical evolution of ideas, will not suffer the same fate? In short, why should we not believe that progressivism was simply the product of a bevy of severely misguided statists who, at the beginning of the 20th century, believed that a sort of benevolent totalitarianism was the wave of the future? Furthermore, why should we believe that History decrees a sort of welfare state future? Indeed, during the 1930s, the wave of the future seemed to be fascist dictatorships; only a muddle-headed optimist would have predicted otherwise.

There is one point, however, on which both foundationalists and progressives can agree: the 2012 election is one of enormous importance. Without question, its outcome will determine the future direction of the country, a reinvigoration of America’s foundationalism or a continuation of progressives’ administrative statism. Further, we might predict, the election will change the country in ways that neither side anticipated.