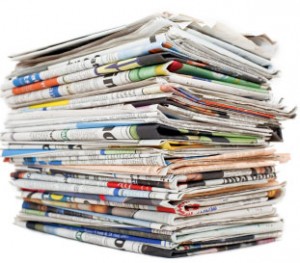 Have you heard any good news lately? Bad news abounds. It’s been another tough year. Economic woes continue. Greece and Italy are on the verge of bankruptcy. Unemployment is still high in the United States (around 8.6 percent), and the stock market has taken a beating. With approximately $108 billion in insured catastrophic losses, 2011 is the second costliest year in history for the worldwide insurance industry. Hundreds of thousands have joined the Occupy Movement in cities around the world to call attention to economic ills. Their activities, combined with those of the Tea Party movement and the massive demonstrations in Arab nations, prompted Time magazine to name the protestor as its “Person of the Year.”

Other problems also plague our world. More people, an estimated 27 million worldwide, are enslaved today than at any time in history. In March, a massive earthquake and tsunami killed almost 16,000 people in Japan. More than 150 tornadoes, leaving 550 people dead, ripped through the United States this year, most notably in Joplin, Missouri and Tuscaloosa, Alabama. Scandals rocked Penn State and Syracuse universities. The Center for Disease Control and Prevention reported this month that one in five American women say that she has been sexually assaulted at some time. Such headlines top newspapers, television news programs, and Internet news sites every day.

Unfortunately, good news is harder to find. Search the Internet, however, and you will find sites such as CNN “Heroes;” “Happy News;” “Real News,” which includes “Compelling Stories, Always Positive;” the “Good News Network’” which features “News to Enthuse;” “Only Positive News;” “Daily Inspire News,” which presents “the brighter side of news;” and “Positive News.” Such sites feature stories of ordinary people who saved the lives of others, good Samaritans who returned money and jewelry they found, individuals who paid other people’s water or heating bills, and people who are working to create a healthy, more fulfilling world.

Consider other good news. Stories of individual determination and resilience are plentiful. A British centenarian of Indian ancestry, Fauja Singh, finished the Toronto Marathon in October. Hedda Bolgar, a 102-year-old therapist based in Los Angeles, still counsels clients four days a week and trains other psychologists.

Despite the global economic slump, some economic progress is occurring. A recent United Nations study reports that poverty in Latin America has decreased by 38 percent in the past 20 years. During this same period, microloans have helped create thousands of new businesses, and jobs and have lifted millions out of poverty in the world’s developing nations. These loans, which are repaid on time in more than 90 percent of cases, enable money to recirculate throughout poor communities.

Several entrepreneurs are partnering with survivors of the devastating January 2010 earthquake in Haiti to move beyond simply providing food and shelter, as important as this goal remains. They are establishing a culinary school, a music conservatory, and a center to provide loans to socially-conscious businesses. Muhammad Yunus, who led the way in creating microloans for the poor, is helping to fund a vocational and computer-training school in Port-au-Prince.

In the United States, hundreds of community-based organizations and thousands of churches sponsor programs to assist the indigent. For example, since 2008, Gina Keatley’s nonprofit, Nourishing NYC, has supplied fresh food and nutrition information gratis to almost 100,000 residents of Harlem and the Bronx. Meanwhile, Arizona Cardinals running back Jason Wright retired from the NFL and gave up a multi-million dollar contract so that he could attend the University of Chicago’s Booth School of Business to pursue his goal of helping inner-city children. Tom and Ann Rose, a Lehigh Valley, PA couple, recently took in their 72nd foster child.

Google announced [in December]that it will donate $11.5 million to several coalitions fighting to end contemporary slavery. This is thought to be the largest-ever corporate grant devoted to advocating for and rescuing exploited individuals who are being forced to labor against their will. International Justice Mission will partner with Polaris Project, Slavery Footprint, and several smaller organizations to increase awareness in the United States, improve resources for anti-slavery enforcement agencies overseas, rescue victims, and help nations devise and pass anti-slavery legislation.

Such actions, often motivated by religious convictions, are heart-warming and inspiring. The Christmas season, however, reminds us of even greater good news. Christianity asserts that God loved people so much that He sent His Son Jesus to be born as a human baby, to teach and show us how to live, and to die on the cross to atone for our sins. Christians believe that accepting Jesus as our Savior and Lord enables individuals to experience the “abundant life” He promised on earth, empowers us to serve others, and ensures us of spending eternity with Him and our loved ones in Heaven.