Trending Now
You are at:Home»Featured»Green Fiascoes and Boondoggles
By Dr. Mark W. Hendrickson on November 17, 2011 Featured, The Economy 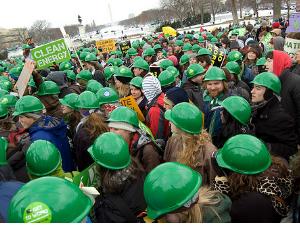 A barrage of news headlines on the Solyndra scandal continue to remind us that President Obama made green jobs one of his administration’s priorities. Those headlines also reveal this initiative to have been a costly mistake.

The bankruptcy of Solyndra, the solar-panel manufacturer that has collapsed despite receiving half a billion dollars from the federal government, is only the tip of the iceberg. The Wall Street Journal recently reported that several other green companies that received generous federal aid are teetering on the brink.

Ener1, whose subsidiary EnerDel received a $118 million federal grant, lost $165 million in fiscal 2010 and has dim prospects. According to the Journal, Ener1 had “lost its bid to supply batteries to Fisker Automotive, a battery-powered car maker which received a $529 million U.S. taxpayer-backed federal loan guarantee in 2010,” when “Fisker chose to buy its batteries from a company called A123 Systems, itself the recipient of a $249 million U.S. Department of Energy grant.”

Great! First Team Obama extends taxpayer dollars to green companies, then it torpedoes them by giving larger grants to their competitors. Meanwhile, Fisker, itself a recipient of over a half-billion dollar handout from Uncle Sam, is making its cars in Finland.

Team Obama’s record on creating green jobs is no more confidence-inspiring than its record in midwifing a viable electric car industry.

A recent study by the Labor Department’s Inspector General examined what became of $162.8 million of Obama stimulus money funneled to the Employment and Training Administration. Set up to “train and prepare individuals for careers in ‘green jobs,’” the score is this: 53,000 individuals were trained, 8,035 got jobs, and only 1,033 trainees still held those jobs after six months.

There are at least four important reasons why we should stop funding “green” government programs:

First lesson: government-appointed experts are incompetent economic planners—a fact of life that any intelligent adult should know after the spectacular failure of central economic planning in the socialist experiments of the 20th century. No matter how brilliant and how well-intentioned government planners may be, they do not and cannot know what consumers want and how much they are willing to pay for it. Only free markets can solve this challenge. If electric cars are to be a viable industry, private companies will make them so.

Second lesson: The government’s involvement in Solyndra raises troubling questions about possible corruption. While I think the Solyndra deal stinks to high heaven, I wonder whether any laws have been broken. Where is the dividing line between influence peddling, legitimate lobbying, political deal-making, and actual crime? Many farm-state Republicans have supported the uneconomical ethanol boondoggle for decades in exchange for generous support of their electoral campaigns, so the practice is bipartisan.

Third lesson: Government job programs are a blatant failure. They have never been economically beneficial. In the 1930s, Franklin Delano Roosevelt had the department of agriculture hire 100,000 Americans to monitor how much acreage American farmers were cultivating. These federal jobs produced no wealth. Their jobs made no more economic sense than paying people to dig holes and then fill them up.

Today’s green workers are economically nonsensical, too. True, they sometimes produce something, but the economic value is invariably less than the amount of tax dollars needed to subsidize their job. In other words, federal jobs make us poorer.

Fourth lesson: Finally, we simply can’t afford these green boondoggles. Uncle Sam’s official debt is now $15 trillion, and when you include off-budget items and unfunded liabilities, the situation is far worse. Given this fiscal reality, it is the height of irresponsibility to throw taxpayer dollars at any special interests, and it is particularly egregious to subsidize enterprises that are plainly uneconomical.

I am not opposed to green industries. What we need is for the government to get out of the way and let green technologies prove themselves in the competitive marketplace. It’s time for change and an end to economic foolishness. Let’s get the burden of green boondoggles off the taxpayers’ back.