Trending Now
You are at:Home»Featured»I Can’t Believe I Almost Missed This
By Amy Ekblad on November 17, 2011 Featured, Marriage 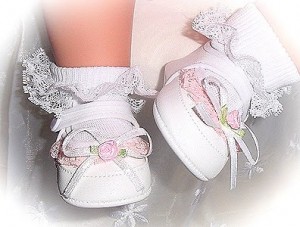 I woke up this morning to the most glorious sound.  Well, first I woke up to someone throwing a laundry basket at my door before he went downstairs,  but after that I woke up to the squeals and giggles of an (almost) 12 week old baby girl – our tenth baby (on earth).  As I laid in bed listening to her joy it reminded me that, really, she shouldn’t be here.  Had we made different choices and followed a different path this baby and the six others before her wouldn’t be here.

After we had three children (and I was all of 24 years old) my husband and I decided we were “done” having children.  For some reason, in our culture, being “done” having children is something to be very proud of (and to announce to everyone that we come into contact with).  I remember when I was pregnant with our second child talking with a mom who had three children.  She told me that she and her husband were “done” and were ready to “get on with their lives.” Her declaration sounded reasonable to me.  I mean, after all, they already had three children.  They had gone above and beyond, in my opinion, and they went to our church where it had been okayed by the priest that they be done.

I knew, at that point, that I wanted one more child but I must admit the idea of “done” appealed to me.  I could maybe have a career, go on vacations, or finish college. The whole world awaited me once I was “done.”  After we had our third child my husband really was done.  But, something surprising happened to my heart.  It didn’t feel done.  I tried to fight that feeling and ignore it.  I tried to fill myself with other things, but I refused to do anything permanent to avoid another pregnancy.  Contraception was bad enough, but sterilization did not appeal to me at all.

Nearly 2 years after our third child had been born, I found out I was expecting again (so much for contraception cutting down on surprise pregnancies and abortions but that’s another story).  I was elated:  A “bonus” baby!  And two years after that along came another bonus baby.  I was over the moon!  Five children!!  But I really did think, “Maybe this is too much.  Maybe we should be done.”  At that I asked a priest if sterilization was okay.  He told us that it was; we nearly followed through with that advice.

But God, thankfully, had other plans.  A good friend told me about Natural Family Planning and it opened a whole new world to us.  We attended a class and learned that the Catholic Church (no matter what ANYONE tells you) does not approve of artificial contraception or sterilization.  We also learned the reason that She doesn’t.   We learned about the procreative and unitive aspects of the marital union and why contraception puts such a barrier between the husband and the wife, making them objects for pleasure instead of uniting them as one person.

We learned that it is not our duty to take our children to Disney World or pay for their college educations or buy them every new gadget on the planet. Those things can be nice, but contraception and limiting family size in the name of such things is not the road we wanted to take.

Not long after our NFP courses I discovered Blessed John Paul II’s Theology of the Body.  It spoke of the beauty of the marital union and how contraception breaks down that union (hence the high divorce rate among contracepting couples and the less than 1% divorce rate between those couples that use natural family planning).

I would like to emphasize here that we are just regular people.  There’s nothing extraordinary about us.  We have gone on to have 5 more children, but we have also stumbled and struggled along the way.  We embraced the Church’s teachings in our hearts and minds but we’ve had to relearn the why of the teachings again and again. My husband, especially, has had to fight off the message from the “world” that having so many children is irresponsible.

We have had to prayerfully discern what God’s plan is for our family and our marriage. We have had to reevaluate our priorities and look out of ourselves in order to parent the children and nurture our marriage.  We have failed, made messes, and have had to start over again and again.  But we look to God, we pray, and we start over.  And when I woke up this morning to the beautiful sounds of our newest baby girl, I was so grateful that the Holy Spirit has been guiding us for all these years.  My life wouldn’t be complete without these little ones.  I would still be searching to fill that space that only trying to follow God’s will can do.

One more thing.  There is a misunderstanding that the Catholic Church teaches you must have as many children as you can.  This is false.  It simply isn’t true.  The Catholic Church teaches that you should be open to children and pray each month whether or not you are able to welcome a new life into your family.  If the answer is no then the Church has provided a means to avoid pregnancy naturally and without putting a barrier between yourself and your spouse.  Using natural family planning allows spouses to accept each other fully.  It is a beautiful thing.  God is so smart, isn’t He?