Trending Now
You are at:Home»Learn & Live the Faith»Catechesis»Have we Forgotten about Satan?
By Michael Seagriff on January 11, 2012 Catechesis, Featured 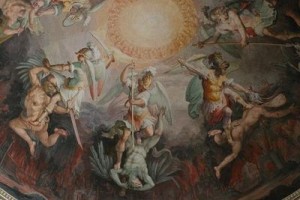 We marvel at the physical miracles, big and small, that Jesus performed during his time here on earth – for example raising Lazarus from the dead and healing St. Peter’s mother-in-law of her fever. And well we should.

But what we often overlook is the frequency with which Jesus spoke to and expelled demons – as is mentioned in today’s Gospel. Isn’t it foolish to think that there is less demonic presence in our current times then when Jesus walked this earth?

The reality of Satan and the never ending spiritual battle to which we are subjected during our earthly lives are two topics rarely discussed or considered these days. Too few among us recognize that we are engaged in spiritual combat with the unseen demons roaming the world in search of our souls.

This is not, according to Father George P. Schommer, O.P., a good thing:

The devil is real.  We fail to recognize the reality of his existence and power and therefore we often fall prey to his many tricks.  Satan’s goal is to lead us away from God and to separate us from Him for all eternity…Satan wants us to despair, to give up, to separate us from God and lead us to hopelessness.  We cannot fight this spiritual battle on our own.  We fail because we rely on our own resources.  We fail to grasp that a missile is coming in from the enemy.  We try on our own to defeat Satan.  We cannot succeed on our own.

This good Dominican is not alone. The late Servant of God, Archbishop J. Sheen, insisted that many seeking the assistance of psychologists and psychiatrists suffer not from mental illness, but from their failure to recognize and repent of the sin in their lives. They would be better served by spending less time on the couch and more time at the foot of Jesus’ Cross, on their knees in front of His tabernacle and in the confessional from which flows the spiritual cleansing and healing graces they seek and which our loving and merciful Lord offers in the Sacrament of Reconciliation.

Let’s be clear then. Satan and his cohorts are real. Just look around you. There is abundant and irrefutable evidence.

We don’t look around with eyes open to the spiritual reality. Consequently, evil often roams unimpeded and countless souls are lost.

[Editors note: Mike’s book Forgotten Truths To Set Faith Afire! – Words to Challenge, Inspire and Instruct is now available. You can read more about it here.]