Trending Now
You are at:Home»Featured»He’s Not a Hitter, He’s a Baby Sitter!
By Tom Purcell on July 1, 2013 Featured, Humor, Sports 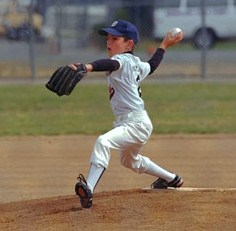 “Stop the game! How dare you suggest that the batter, an innocent 12-year-old child who only wants to make contact with the ball, cannot hit! Have you considered how your ridicule will harm his self-esteem? As the umpire of this game, I forbid you to utter such taunts again. Play ball!”

“We want a pitcher, not a belly itcher!”

“Stop the game! I see the other team is just as offensive. How dare you suggest the pitcher lacks the skill to throw the ball over the plate. Perhaps, through no fault of his own, he has an affliction that causes his skin to itch. I don’t want to hear that again. Play ball!”

“Stop the game! How dare you make the batter swing before he is good and ready. Do you have any idea how hard it is to hit a little white ball with a bat? How dare you try to embarrass him while his family watches. I better not hear such words again. Play ball!”

“We want a pitcher, not a glass of water!”

“Stop! A glass of water! You’re suggesting the pitcher is weak and unstable like some clear fluid? Do you have any idea how hard it is to throw a ball over the plate knowing the batter might hit a home run? How would that make you feel? No more water comments. Now play ball!”

“Stop the game! Broken ladder! You’re suggesting the batter is skinny and gangly the way a ladder is? What’s worse, he’s like a broken ladder? The next kid who makes a ladder comment will be ejected from this game. Play ball!”

“He’s not a pitcher, he’s an underwear stitcher!”

“Stop! An underwear stitcher! Has it occurred to you that the pitcher may be from a poor family? Maybe he has only one or two pairs of underwear that his mother has to repair. How dare you make fun of someone who has so much less than you. Now play ball!”

“Stop! Baby sitter! What is that supposed to mean? That a boy can’t be sensitive and caring and still hit a baseball? Or that if he is sensitive and nurtures a child then he can’t hit at all? How dare you. Now play ball!”

“Whoop de do, you throw like my sister Sue!”

“Whoa, whoa, whoa! It’s not enough for you to attack someone’s self-esteem, but now you bring gender politics into it. Now you suggest that girls are not equal to boys? Is that it? Is that the kind of world you want to live in?

“It’s no wonder that Little League associations around the country are banning taunting and chatter. MSNBC reported on the trend. Something must be done to stop some kids from assailing the self-esteem of others.

“I know some believe the chatter ban is outrageous. They say chatter has been a part of baseball — it pulls kids together and keeps them from daydreaming.

“They say traditional chatter is useful. Baseball teaches children lessons about life — teaches them about competition, success, failure and adversity. They say that in the real world, some people will root against you — that chatter exposes kids to this concept in a harmless way.

“They say that the ban has little to do with kids anyway. The kids can handle the gentle ribbing. It’s the parents who can’t handle it. And since many parents have micromanaged every other aspect of their child’s life, they’re trying to micromanage Little League baseball, too.

“Maybe that is true, but I want you to know this. As long as I am umpiring this game, there shall be no more taunting of any pitcher or any hitter. Now play ball!”

“He’s not a catcher, he’s a nose scratcher!”

Exclusive Excerpt from: “An Apple Core, a Toilet: Misadventures of a 1970s Childhood” by Tom Purcell