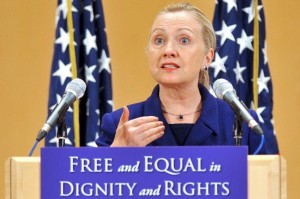 An address by Secretary of State Hillary Clinton on gay rights as a priority of U.S. policy deserves far more attention than it’s gotten up to now. As a statement of the views of the Obama administration, Clinton’s remarks were a remarkably candid—and remarkably  chilling—exposition of official determination to make the world safe for LGBT at home as well as abroad.

Speaking last month at United Nations offices in Geneva, Clinton first sought to spin a muddled synthesis linking gay rights and religious faith. In part, this was how it came out:

“Our commitments to protect the freedom of religion and to defend the dignity of LGBT people emanate from a common source. For many of us, religious belief and practice is a vital source of meaning and identity, and fundamental to who we are as people. And likewise, for most of us, the bonds of love and family that we forge are also vital sources of meaning and identity. And caring for others is an expression of what it means to be fully human. It is because the human experience is universal that human rights are universal and cut across all religions and cultures.”

With all due respect—what on earth does that mean? The strikingly confused venture into reasoning in this passage would provide rich material for a logician’s intellectual scalpel. And just what is this common source from which the protection of religious freedom and the defense of LGBT people are said to proceed? One can favor both things, as I do, without succumbing to the sentimental fallacy of an unnamed “common source.”

But set that aside for now. What’s really troubling about Clinton’s text is what comes next: “While we are each free to believe whatever we choose, we cannot do whatever we choose, not in a world where we protect the human rights of all.” On the surface, that’s true to the point of banality. But what lies below the surface? The answer is: coercion on behalf of LGBT interests.

“Progress comes from changes in laws,” Clinton explains. “In many places,  including my own country, legal protections have preceded, not followed, broader recognition of rights. Laws have a teaching effect….It is often the case that laws must change before fears about change dissipate.”

Take that out of the realm of abstraction, and the classic case to illustrate the point is abortion, where the U.S. Supreme Court rammed legalization down the nation’s throat by an act of what one dissenting justice called raw judicial power.

And now it’s LGBT’s turn? Acting under the aegis of anti-discrimination laws, government agencies move to enforce the newly discovered right of same-sex couples to marry and adopt children, the right of gay partners to rent the local K of C hall for their wedding reception, the right to have pro-homosexual indoctrination inserted into public school textbooks, and on and on, as “rights” sprout like mushrooms in the fertile soil supplied by the state.

“The Obama administration defends the human rights of LGBT people as part of our comprehensive human rights policy,” Secretary Clinton affirms. And to those who object, remember: “laws have a teaching effect.”

Clinton and the administration she serves aren’t bad people. But they’re secularists at heart (though sometimes with a superficial religiosity) and committed to enactment and enforcement of an expansive program for the bestowal of rights upon causes they favor—abortion rights, LGBT rights, whatever. Woe betide those foolish enough to object in the face of the coercive power of the state.