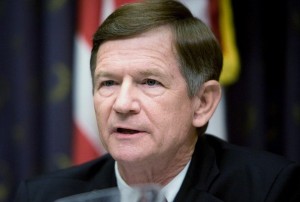 The full committee of the House Judiciary convened yesterday to discuss the ongoing religious liberty violation resulting from the HHS contraception mandate for all healthcare policies except for a very narrow exemption that, according to Congressman Trent Frank , “Jesus Christ himself and Mother Teresa would not qualify for.”

The administration has denied federal grants to religious groups engaged in serving the poor and vulnerable.  It has deleted religious organizations from the list of non-profit employers that qualify for federal student loan forgiveness programs. And, the administration even argued before the Supreme Court that the federal government has a say in when a church can fire one of its religious ministers.  All nine Justices rejected the argument.

The administration is treating the First Amendment right to the free exercise of religion as nothing more than a privilege arbitrarily granted by the government.

Thomas Jefferson’s Bill for Establishing Religious Freedom proclaimed, “that to compel a man to furnish contributions of money for the propagation of opinions which he disbelieves is sinful and tyrannical.”  Yet this is exactly what the HHS mandate is doing.

The four witnesses to testify at the “Executive Overreach: The HHS Mandate Versus Religious Liberty” hearing were Bishop William Lori, Chairman of the Ad Hoc Committee for Religious Liberty for the U.S. Conference of Catholic Bishops, Asma Uddin, attorney with the Becket Fund for Religious Liberty, Dr. Linda Rosenstock, Dean of Public Health at UCLA, who was part of the IOM that made the contraception mandate recommendation, and Jeanne Monahan, director of the Center for Human Dignity with the Family Research Council.

In his testimony, Bishop Lori clearly reaffirmed that the Church’s objection to the mandate has nothing to do with preventing women from having access to birth control, rather, it’s about government forcing religious people and institutions to violate their religious belief and provide coverage for contraception or sterilization.

It is precisely that element of government coercion—of government’s conscripting unwilling religious people and groups in its effort to increase the usage of contraception nationwide—that makes this a religious freedom dispute. This is not a matter of “repackaging” or “framing” the dispute as one of religious freedom, as some have suggested. It is a matter of acknowledging the basic fact that government is forcing religious people and groups to do something in violation of their consciences.

Reiterating that the Bishops conference works with people on both sides of the political aisle, Bishop Lori was critical of those “liberals” who initially were outraged with the HHS rule but were now satisfied with the “accommodation” announced by the Obama administration.  Bishop Lori said the so-called change was “no change” and the February 10 action “uses the phrase ‘without change’ four separate times.”

Only in a world turned upside-down by the HHS mandate might it be considered “liberal” for the government to coerce people into violating their religious beliefs, to justify its intrusion based on the minority status of those beliefs, to intrude into the internal affairs of religious organizations, to discriminate blatantly based on sex, to crush out religious diversity in the private sector, and to incentivize religious groups to serve fewer of the needy.

Dr. Linda Rosenstock, who served as chair of the Institute of Medicine’s (IOM) Committee on Preventive Services for Women provided insight as to how the committee determined that contraception should be a preventive health service for women. Dr. Rosenstock testified that after gathering evidence and deliberating over a six-month period the committee recommended, “eight preventive health services for women be added to the services that health plans cover at no cost to patients.”

Dr. Rosenstock testified that the IOM report “urged HHS to consider adding the full range of Food and Drug Administration-approved contraceptive methods as well as patient education and counseling for all women with reproductive capacity” to reduce unintended pregnancies.

Family planning services are preventive services that enable women and couples to avoid an unwanted pregnancy and to space their pregnancies to promote optimal birth outcomes. Pregnancy spacing is a priority for women’s health because of the increased risk of adverse pregnancy outcomes for pregnancies that are too closely spaced (within 18 months of a prior pregnancy).

This argument raises several concerns. Firstly, it tacitly assumes that services mandated under the new HHS policy (contraception, abortion, sterilization) are indispensable for birth spacing and avoidance of unwanted pregnancies. The 100% reliable method of abstinence is not even discussed. Nor is natural family planning.

Crucially, however, the IOM- and by extension the government adopting the IOM’s recommendations- seems to assume authority to determine both the meaning of “optimal birth outcomes” and the “right” time between births.

This is intrusive, a violation of privacy, and has the feel of “big daddy” knowing best. Why is the government inserting itself into the private lives of couples planning their families? And, does the government really know better than the family or the woman’s doctor what time is optimal for a subsequent child?